Scytosiphon lomentaria and Padina pavonica are the two members of the Phaeophyceae. Our study has reported that these two brown macroalgae exhibit the important biological potentials such as antioxidant, hypoglycemic and hypolipidemic activities. However, S. lomentaria exhibit potent antioxidant activities, it has been observed that P. pavonica has strong antioxidant potentials such as 251.56 ± 1.33 mg GA g-1 dw total phenolic content, 70.50 ± 1.4% DPPH radical scavenging activity and 60.6 ± 1.6% bleaching activity. In addition to antioxidant potentials, the species have not displayed significant cytotoxicity at the administered doses on MCF-7. Nevertheless, the highest dose for P. pavonica (100 µg ml-1) caused to moderate cell viability inhibition (43%). A meaningful IC50 value could not be calculated for S. lomentaria. Many enzyme inhibition tests are commonly used as indicator for biological activities. Both P. pavonica and S. lomentaria have higher α- glucosidase enzyme inhibition potential than acarbose. The strong inhibition percentages of these cold methanol extracts (89 and 88%, respectively) indicate their hypoglycemic activity. The pancreatic lipase enzyme inhibition assay was used to evaluate the hypolipidemic potentials of these microalgae. P. pavonica have strongly inhibited this enzyme when compared to orlistate (93 and 95%, respectively). These results have figured out the medical and pharmaceutical potentials of these species.

Marine microalgae are known to be functional foods in Asian countries [1-4]. Due to their beneficial natural potentials, seaweed extracts have also been investigated for their biological activities [5-7]. Their low lipid content, high polysaccharides content and rich natural minerals [8] could create healthy diets for consumers [4,9,10] or present natural and non-toxic substances for researchers [11]. Some disease such as diabetes or cardiovascular complications which have world- wide high incidence [12] require special treatments [13,14] and diets [15-19] with the aim of decrease the blood glucose and lipid level.

Two member of Phaeophyceae, Scytosiphon lomentaria and Padina pavonica, have also had significant biological activities [1,20-25]. However, extraction studies of plants give complicated results depend on extraction conditions such as solvent, temperature and term [26], many natural compounds or molecules have already been identified [27-29] undergone their preclinical studies [30,31], even applied for patent [32]. This study focuses on antioxidant activities and enzyme inhibition potentials of these two microalgae.

The samples of Scytosiphon lomentaria and Padina pavonica were collected Izmir Gulf, from March 2011 to March 2012. Specimens in the labelled plastic bags were approximately 0.5-1 kg wet weight and immediately transported to the laboratory in cooled containers. To remove sand and epiphytes, algal thalli were gently rinsed in seawater. Taxonomic identification was done in terms of their morphology. Specimens had been stored at -20°C until experiments begun. The voucher specimens are preserved in the Herbarium of Ege University.

Thalli were lyophilized and 1 g of powder was extracted with 10 mL of methanol by shaking in an orbital shaker at 300 rpm overnight at +4°C. Extracts were then centrifuged at 4000 rpm for 10 minutes and supernatants were collected. Collected supernatants were placed in orbital shaker and extraction was initiated again. This procedure had been repeated for 10 days. After 10 days of extraction/centrifugation cycle, solvent was removed by lyophilization and powders of the crude extracts were dissolved in DMSO (dimethyl sulphoxide; 10 mg crude extract per mL; Sigma-Aldrich, USA) to be stored at - 20°C for further experiments.

Extraction efficiency was roughly evaluated by thin layer chromatography. Crude macroalgal methanol extracts were dissolved in methanol (1 mg ml-1). Individual samples were loaded four times on silica coated aluminum TLC plate as a dash. The solvent system of chloroform: ethyl acetate: methanol (5: 5: 1, v/v) was used and the dashes was visualized after dipping into hydrochloric acid/ methanol (1:9, v/v) and heating until they appeared as dark dashes.

Radical scavenging activities of the species were measured using by 2,2-diphenyl-1-picryl-hydrazyl (DPPH; Sigma-Aldrich, USA) radical (Sharma and Bhat). Briefly, 100 μl of 50 μM DPPH solution was added into 96- well plates containing 100 μl of sample (5 mg ml-1) solutions or 100 μl of positive control ascorbate (10 μg ml-1). After 30 minutes, the decline in absorbance was recorded at 520 nm against individual blank. All measurements were repeated at least for two times and mean absorbance values were used to evaluate results. The capability to scavenge the DPPH radical was calculated using the following equation:

The total phenolic contents (TPC) of algal samples were determined by using Folin- Ciocalteu assay (Zhang et al.) in 96- well plates. Methanol extracts (10 mg ml-1) were loaded into 96- well plate containing 90 μl of deionized water and 10 μl 2N Folin- Ciocalteu’s reagent (Sigma-Aldrich, USA) in each well. Plates were incubated for 5 minutes at room temperature. After incubation 100 μl of sodium carbonate (7%) was added to each well. Plates were shaken in the dark at room temperature for 90 min. The absorbance of the formed colour was measured at 750 nm. All measurements were repeated three times and mean absorbance values were used to evaluate results. A calibration curve of Gallic acid (ranging from 0.010 mg ml-1 to 200 mg ml-1; Sigma-Aldrich, USA) was drawn, and the results were expressed as Gallic Acid (GA) mg equivalents’ ratio to dry weight (g).

The β-carotene/ linoleic acid activities of samples were evaluated by β-caroten bleaching system with the minor modifications for 96-well plate (Zhang et al.). 8 μl linoleic acid (SIGMA: L1012) were pipetted into eppendorf containing 800 μl of β- carotene in chloroform (1 mg ml-1) and added 80 μl of Tween 40. The chloroform was blown away by nitrogen flow. This mixture was pipetted slowly in 20 ml of distilled water with vigorous agitation to form an emulsion. 20 μl of blank (ethanol), positive control (BHA: Buthyl- 4- hydroxyanisole) or samples (5 mg ml-1) were loaded 96- well plate and added 200 μl of the emulsion and the absorbance was measured immediately at 450 nm. The plate was placed in a dark room for 90 min. The absorbance was measured again. All measurements were carried out in triplicate. The antioxidant activity of extracts was evaluated using the following formula:

Growth inhibitory effects of extracts were investigated via mitochondrial dehydrogenase activity by WST-8 colorimetric assay kit (Sigma-Aldrich, USA). Briefly, MCF7 cells were seeded in 96- well plate 10 × 103 cells per well and incubated overnight for both cell attachment and growth. Macroalgal extracts were added to wells in different final concentrations (0, 1, 5, 10, 25, 50 and 100 μg ml-1) with six repeats. Maximum DMSO concentration was 1%. After 72 hours of incubation, 10 μl of WST-8 reagent was added to wells and plates were incubated at 37°C for 15 minutes for the formation of color. Absorbance was measured at 450 nm on multi-well spectrophotometer. Untreated cell viability was considered as 100% and extract- treated cell viabilities were calculated accordingly. IC50 (inhibitory concentration 50) values were calculated using CalcuSyn v2.0.

α- Glucosidase enzyme inhibiton: α- Glucosidase enzyme inhibiton test was used to determine the hypoglycemic activity of the macroalgal extracts. This enzyme inhibition activity was assessed using the PNG (4- nitrophenil- α- D- glucopyranoside; SIGMA: N1377) as substrate and Saccharomyces cerevisiae α- glucosidase as enzyme (SIGMA: G5003). 50 μl of PBS (100 mM; pH 7.5) were loaded into wells of 96- well plate and 2 μl of samples (1 mg ml-1), acarbose (250 mg ml-1; as positive control) or PBS (for enzyme reaction) were added. 15 μl of α- glucosidase was added, except for blank. The plate was pre- incubated at 37°C for 10 min. 15 μl of PNG (3 mM) was added into wells and the plate was incubated at 37°C for 30 min. The enzymatic hydrolysis of substrate was monitored by the amount of ρ- nitrophenol released in the reaction mixture at 410 nm where the enzymes were replaced buffer. The inhibition percentage of α- glucosidase was assessed by following formula:

Pancreatic lipase enzyme inhibition test: Pancreatic lipase enzyme inhibition test was designed as fluorometric assay for 96- well plates (black flat bottom). 50 μl phosphate buffer with CaCl2 (Ca-PBS; 0.1 mM CaCl2, pH 7.5), 50 μl of pancreatic lipase (SIGMA: L0382; 2 mg ml-1) were loaded into wells. 20 μl of sample (5 μg ml-1), orlistate (positive control; SIGMA: O4139; 15 mg ml-1) or Ca-PBS (for enzyme reaction) were added and then the plate was pre-incubated at 37°C for 10 min. After the pre-incubation, 100 μl of 4-methylumbelliferyl oleate (4- MU; SIGMA: 75164; 0.1 mM) was pipetted into wells and the plate was incubated 37°C for 30 min. The amount of 4-MU released by the lipase measured using a fluorescence spectrometer at an excitation wavelength of 320 nm and an emission wavelength of 450 nm. The inhibition percentage of pancreatic lipase was assessed by following formula:

Scytosiphon lomentaria (Lyngbye) Link and Padina pavonica (Linnaeus) Thivy were collected with the Voucher IDs EGE41710 and EGE41834, respectively. Collection data about date, location and coordinates was presented in our previously study [33]. TLC profiles of macroalgal cold methanol extracts are shown in Figure 1. The fingerprints exhibit the high abundancy of extracted molecules for these macroalgal samples. Our study has figured out high antioxidant, hypoglycemic and hypolipidemic potentials for cold methanol extracts for Scytosiphon lomentaria and Padina pavonica. 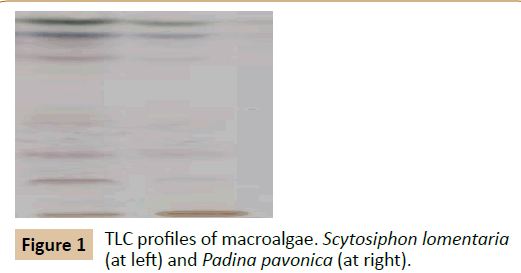 Antioxidant activities of macroalgal extracts are presented in Table 1. Commonly named as peacock’s tail, P. pavonica, has 251.56 ± 1.33 mg GA g-1 dw TPC, 70.50 ± 1.4% DPPH radical scavenging activity and 60.6 ± 1.6% bleaching activity. Whereas, in literature, other extractions types of S. lomentaria which had been used different solvent reported different DPPH inhibition rates such as 16.00 ± 1.13% for carbohydratic hydrolase and 19.33 ± 0.49 proteolytic enzyme extract [34], It has been reported that its methanol: chloroform extract [35] and ethanol extract [1] have low DPPH scavenging capacities. It has also been observed that different solvents used for extraction of this species cause lower yield for TPC [35,36]. It is quite apparent that these differences of antioxidant activity probably arise from the different collection dates, performing drying and/or milling, solvent selection and extraction term. Based on the interactions of compound being analyzed and solvent, this situation is generally valid for all kind of extraction studies. According to our results, P. pavonica has displayed both high TPC and DPPH inhibition rates. But it has been reported that its methanol and ethanol extracts exhibit lower TPC and DPPH inhibition rate than those our study [37]. Same solvent but different yields for TPC probably are a result of the temperature. The colder temperatures during extraction protect the compounds of microalgae. As a summary, even if the parameters for the solvent type, the temperature and term of extraction are different, both S. lomentaria andP. pavonica have good antioxidant capacities.

The effects of macro algal extracts on viability of MCF-7 cells are depicted in Figure 2. At 100 µg ml-1 of their concentrations, both P. pavonica and S. lomentaria weakly inhibited MCF-7 viability. At the lower doses than 100 µl ml-1, S. lomentaria did not display a cell viability inhibition. While, IC50 value of P. pavonica was 320 µg ml-1, IC50 value of S. lomentaria was not determined. The methanol extract has displayed cytotoxic activities on Hela (IC50: 86.45 μg ml-1) and MDA-MB (IC50: 74.59 μg ml-1) cell lines [38]. It has been reported that xenican diterpenes of P. pavonica methanol extract exhibits cytotoxicity on H460 cells (37.3%) and HepG2 cells (24.1%) at 10 µg ml-1 concentration [39]. But, oxysterol of P. pavonica dichloromethane extract inhibits the viability of KB cells with the percentage inhibition of 100% [20]. It is very clear that the solvent type, extraction conditions, extracted compound, administered doses and cell line selection affect the throughputs of cytotoxicity studies. An IC50 value could not be determined for S. lomentaria, in contrast our results, its ethanol: acetate fraction induced the apoptosis by way of the down-regulation of Bcl-2 and the activation of caspase on leukemia cells [21]. Both Padina pavonica and Scytosiphon lomentaria have higher α- glycosidase enzyme inhibiton potential than acarbose. According to the measurements, positive control acarbose inhibited 79.5 percentage of α- glucosidase enzyme activity. But, the inhibition rates of macro algal extracts were higher than this value. In spite of the fact that both macroalgal extracts were subjected as crude material, P. pavonica and S. lomentaria strongly inhibited this enzyme, 89 and 88%, respectively. It has been observed that its polyphenols and phlorotannins could weakly inhibit α- amylase and - glucosidase than acarbose [40]. Researchers have notified that its ethanol extract lead to ameliorate elevated levels of glucose, aspartate aminotransferase, lactate dehydrogenase and creatine kinase and decline serum insulin levels of Type 2 diabetic rats [41]. Experiments showed that S. lomentaria also have same inhibition effect on this enzyme. This is the fact that both P. pavonica and S. lomentaria have strong-glycosidase inhibition potential is taxonomically important so that probably reflects seconder metabolite profile analogy. 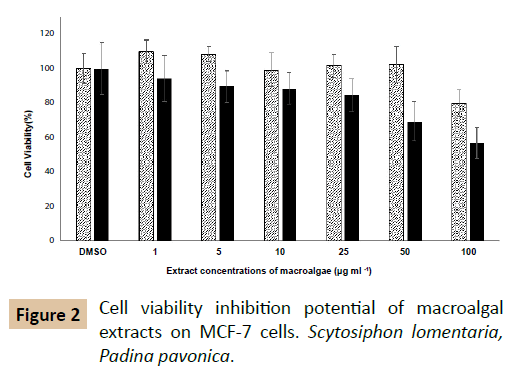 The authors declare that there are no conflicts of interest.