In-vitro conservation consists in the maintenance of living biological material under aseptic conditions and can be carried out in the medium or long term [1,2]. In medium-term conservation, it is possible to highlight the slow-growing technique, in which propagules are kept at reduced temperatures (4°C - 15°C) with low luminous intensity and culture medium containing osmotic agents [3]. Cryopreservation, a method that guarantees the viability and genetic integrity of plant material for a long period of time, through its ultra-low temperature (-196ºC) stands out for long-term conservation [4].

The establishment of protocols for cryopreservation and subsequent explant survival is dependent on application of the most appropriate technique used for size and water content in plant material [8]. Thus, the choice of a method that allows a rapid cooling and, at the same time, leads to the direct transition of water from the liquid state to an amorphous or vitreous solid state, called vitrification, can ensure the reduction in crystallization [9].

Among the main cryopreservation techniques are slow cooling, characterized by the use of low concentrations of cryoprotectants and gradual temperature reduction, controlled by a programmable freezer [10]. The classical vitrification technique – PVS2 vitrification, which is based on the increase of solution viscosity, using highly concentrated cryoprotectant solutions (such as PVS2), followed by ultrafast cooling of explants, wherein solidification occurs without crystallization [11-13]. Droplet vitrification method [14] which differs from PVS2 vitrification, since the samples are placed on a small sterilized aluminum foil. One PVS2 drop is placed on samples and all aluminum foil is dipped in LN [15].

Encapsulation-dehydration is a technique in which explants are encapsulated in alginate matrix, pre-cultured in a medium containing high concentrations of sucrose, dehydrated by exposure to air in a laminar flow chamber or drying in a container with silica gel, reducing the water content to 20% to 30%, followed by rapid immersion in LN [11]. Encapsulation-vitrification is a combination of encapsulation-dehydration and vitrification methods, in which the explants are encapsulated in an alginate matrix, transferred to cryotubes, exposed to cryoprotectant solutions and rapidly frozen in LN [16].

Such techniques seek to minimize cellular damage, and consequently increase the regeneration rate of explants [17-19]. Thus, cryopreservation becomes a tool for the successful creation of germplasm banks, in which cryopreserved plant material will be readily available for regeneration [4].

Cryopreservation techniques have been used to store live biological material, for long periods [20]. However, during the sequential stages of cryopreservation, the plant material is exposed to some cryoprotectant solutions such as Loading Solution - LS; Plant vitrification solution - PVS; and Recovery Solution - RS, which basically consist of distilled water, high concentrations of sucrose, MS basal salts, ethylene glycol, Glycerol and dymethylsulfoxide- DMSO [21]. All these compounds in contact with the intracellular space for a certain period can lead cells to osmotic and oxidative stress and thus damage the tissues, making it impossible to regenerate the explants. Nevertheless, all the factors affecting the success of cryopreservation, especially biochemicals with important implications for plant material survival, are not yet known [5].

Stress factors such as dehydration from vitrification solutions, as well as freezing and thawing, can induce the production of Reactive Oxygen Species (ROS) [22]. As a consequence of aerobic life, ROS are formed by the partial reduction of molecular oxygen [23]. Oxidative stress conditions are characterized by the accumulation of different ROS: superoxide radical (O2•-), hydroxyl radical (•OH), singlet oxygen (1O2) and hydrogen peroxide (H2O2). Under normal physiological conditions, there is a balance between the formation of ROS and the protective antioxidant mechanisms of cells [24,25]. In plant cells, ROS can be formed preferentially in mitochondria, chloroplasts and peroxisomes [22]. On the other hand, these organelles act in an integrated way to overcome the situation of oxidative stress and to maintain cellular redox balance [26]. When this balance is disrupted, the increase in ROS can induce cell damage and even leads to cell death [23,27]. It is known that increased levels of ROS can cause damage to biomolecules such as DNA and proteins [28] and, by reacting with membrane lipids, a process called lipid peroxidation can occur, which may trigger programmed cell death [29], shown in Figure 1. 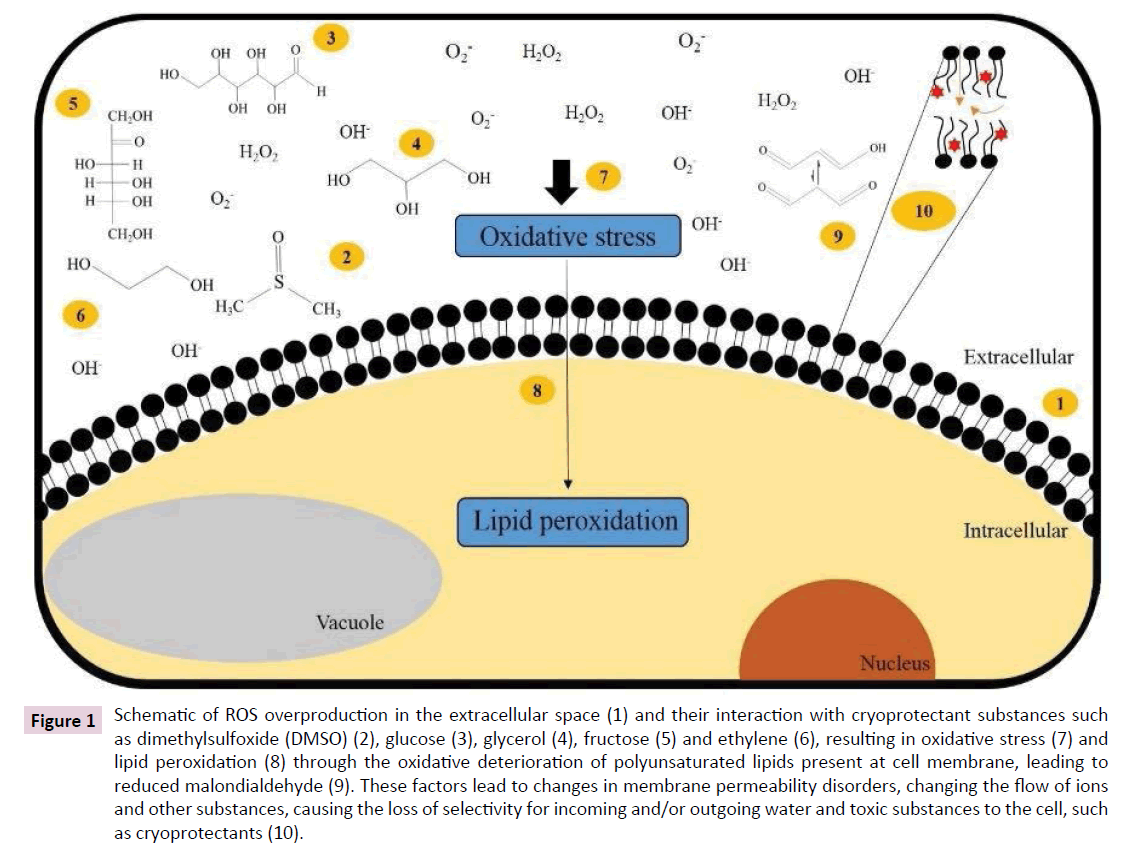 Figure 1: Schematic of ROS overproduction in the extracellular space (1) and their interaction with cryoprotectant substances such as dimethylsulfoxide (DMSO) (2), glucose (3), glycerol (4), fructose (5) and ethylene (6), resulting in oxidative stress (7) and lipid peroxidation (8) through the oxidative deterioration of polyunsaturated lipids present at cell membrane, leading to reduced malondialdehyde (9). These factors lead to changes in membrane permeability disorders, changing the flow of ions and other substances, causing the loss of selectivity for incoming and/or outgoing water and toxic substances to the cell, such as cryoprotectants (10).

In general, plant cells have two mechanisms to maintain stable levels of ROS: (i) enzymatic: represented by the action of enzymes such as superoxide dismutase (SOD), ascorbate peroxidase (APX) and catalase (CAT) and; (ii) non-enzymatic: includes the ascorbate (ASC)/glutathione (GSH) cycle [26]. The activity of the antioxidant system is a defense mechanism triggered when the cells are confronted with some type of stress [30]. However, proper ROS concentrations can stimulate the transcription of defense genes and trigger adaptive responses in the plant [31].

Recent studies support the hypothesis that oxidative stress may be an implicit component in somatic embryogenesis and seed germination [30]. However, at the same time, proteins were identified, expressed after the explant underwent cryoprotectant, freezing treatments, and an influence of cryoprotectant excess was verified at the intracellular space. Together with these observations, it was found that lipid peroxidation shows a negative correlation with the cryopreserved explants survival, an important factor to evaluate cell survival during the cryogenic treatment, thus modulating the effects of excessive ROS production.

Different factors can trigger stress signals that end up being responsible for the convergence of cell signaling pathways. Therefore, studies on biochemical aspects of cryopreservation may increase the understanding of stress associated with cryopreservation and provide clear solutions for the oxidative stress control and elimination of free radicals, essential for the technique’s success for a greater number of species.