Adenocarcinoma of small bowel is a rare entity. Its diagnosis can be challenging because of lack of symptoms or non-specific symptoms (abdominal pain, nauseas, vomits. etc.). When intestinal obstruction or upper digestive haemorrhage occurs they are in advanced stage. They incidence has increased in the last years, probably due to the development in imaging techniques, including capsule endoscopy. A 67-year-old man with medical history of anemia was admitted to our center. Colonoscopy and gastroscopy did not reveal any alteration. Capsule endoscopy demonstrated a tumor placed on proximal jejunum. Computed tomography showed enlarged lymphatic nodes and solid lesions in liver. Oncological intestinal resection with lymphadenectomy was performed and histological study reported a mucinous adenocarcinoma of small bowel with metastasis in nodes (T3N2M1). Adenocarcinomas of small bowel are uncommon tumours that require surgical treatment. Most of them are in advanced stages when symptoms are evident. On the contrary, in early stages they remain silent and diagnosed is frequently delayed.

Small bowel (SB) constitutes 75% of all the length of digestive system and 90% of all surface area for absorption [1]. The malignant neoplasms of the SB account for less than 3% of all malignant digestive neoplasm [2]. However, their incidence has increased in the last years due to the development in new imaging techniques and the advance in endoscopic methods [3]. Malignant neoplasms of SB are classified in adenocarcinoma (30-40%), carcinoid tumours (35-42%), lymphoma (15-20%) and sarcoma (10-15%). Adenocarcinoma of SB has an incidence 40- 50 times lower than colorectal adenocarcinoma [4]. We report a 67-year-old male with medical history of upper digestive haemorrhage and anemia diagnosed of adenocarcinoma of jejunum using capsule endoscopy.

A 67-year-old male with a medical history of high blood pressure, diabetes mellitus and dyslipidemia was admitted to our center because of upper digestive hemorrhage with anemia.

He did not report history of taking steroidal-anti-inflammatory drugs. He was a non-smoker and non-alcoholic. Physical examination revealed stable vital signs and no abdominal pain. On admission, he presented hemoglobin 9.5 g/dL, 10.500 leukocytes in a microliter and prothrombin time (PT) and activated partial thrombophlebitis time (APTT) in normal range. A gastroscopy and colonoscopy were performed and did not show any relevant alteration. Then a capsule endoscopy (Covidien SB3) was done and showed a neoplasm with signs of growing and ulceration at proximal jejunum (Figure 1). A computed tomography revealed enlarged mesenteric lymph nodes and solid lesions on liver related to metastasis (Figure 2). 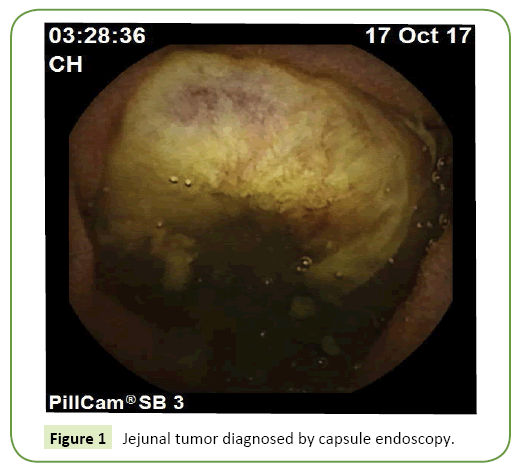 The patient was referred to Hematology Department to optimize hemoglobin level and underwent surgery. A laparoscopic approach was chosen, a neoplasm at proximal jejunum was identified and an oncological resection including mesenteric lymph nodes was performed; a mechanic side-side anastomosis was done. On liver, solid lesions were evidenced and a biopsy of one them taken. No other data of dissemination were found (Figure 3). 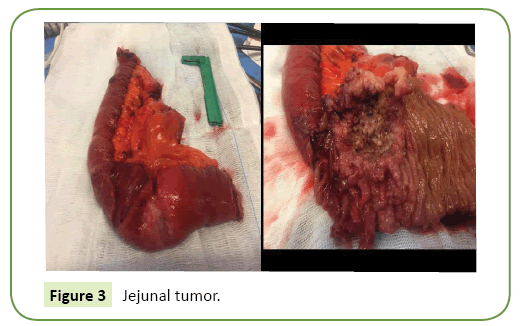 Postoperative period was uneventful and the patient was discharged after 10 days. The patient was referred to Oncology Department. Histological study revealed a mucinous adenocarcinoma of SB, well-differentiated (G1) of 8.4 cm size with free resection margins. The lesion presented linfovascular invasion and metastasis in 6 of 13 lymph nodes. Liver biopsy confirmed metastasis of intestinal adenocarcinoma. According to the 2010 American Joint Committee on Cancer (AJCC) it was classified as T3N2M1.

Adenocarcinoma of SB presents an incidence that varies according to the different geographic areas. In USA, neuroendocrine tumors are more common than adenocarcinoma. However, in Thailandia GISTs are the most frequent type [2,3].

Small bowel adenocarcinoma predominates in males in their sixth decade of life, with a male to female ratio of approximately 1.4.

Etiopathology of small bowel adenocarcinomas is similar to colorectal adenocarcinoma. The high rate of replacement of the cells of small bowel (approximately 4 to 7 days) does not allow to accumulate mutated cells, in addition immunoglobulins IgA play an important role in immune function. However, despite these features, they still present the sequence adenoma-carcinoma found in colorectal carcinomas, although they have a lower incidence of mutation in gen APC [3,9,10].

Diagnosis is a challenge and it is frequently delayed due to lack of symptoms. Furthermore, there is not a screening program for these tumors. Approximately 50% of all patients remain asymptomatic and the rest will present abdominal pain, vomits, nauseas or lose of weight [4,6,11].

Intestinal obstruction and digestive hemorrhage appear when the tumor is in advanced stage. On this situation, 43% of all patients will have metastasis , being the peritoneum the most frequent place of dissemination [12].

CT is a useful tool, however it has a low sensibility (57%) for lesions at early stage [3]. Recently, CT with enteroclysis has demonstrated a higher sensibility and specificity, 85-95% and 90-96% respectively. Capsule endoscopy and double balloon enteroscopy are also useful tools for diagnosis [5].

Surgery is the gold standard, it consists on intestinal resection with free margins and lymphadenectomy In some occasions, a cephalic duodenopancreatectomy could be required ( for tumors located in the second portion of duodenum). However, when it is placed in the third or fourth portion, pancreatic preservation is the best option. For those located in distal ileum, right hemicolectomy could be needed [6]. Saxena reported the role of hyperthermic intraperitoneal intraopertaive chemotherapy for selected patients [12]. Chemotherapy used for adenocarcinoma of SB is based on the regimen used for adenocarcinoma of colon with nodes affection [6]. In the last years, the use of chemotherapy for these tumors has increased, especially from 1985 to 2005 [3]. FOLFOX (leucovorin, fluoracil, oxaliplatin) regimen reaches a survival approximately of 26.2-42.4 months for advanced stages [3,5,13].

Poor prognostic factors are: location (worse for duodenum), age, stage, margins affected and nodes [7,10]. Global survival depends on tumoral stage. So, in early stages (I-II) the 5-year survival is 39-60%, on the contrary when metastases appear it plunges and scarcely reaches 3-5%.

Adenocarcinoma of SB is an uncommon malignant neoplasms. In early stages, it remains silent, however in advanced stages intestinal obstruction and upper digestive hemorrhage are two typical presentations.

Surgery is the gold standard, oncological intestinal resection with lymphadenectomy is mandatory. However, the prognosis is poor with low survival rate.

The authors declare that they have no competing interests and any sources of funding for our publication.