Introduction: Iterative hepatectomy for recurrent gallbladder cancer was not reported yet. Radical surgery of gallbladder carcinoma is still modest for almost cases advanced gallbladder which is the majority of this disease. Radical surgery is possible only for 15% of patients. We have realised 4 cases of hepatectomy for a recurrent tumours. Materials and Methods: The first patient was 42 year-old woman who had bisegmentectomy IV-V and extensive lymphadenectomy and associated to anther bisegmental VI-VII at 24 months on postoperative path. The second patient woman aged of 48 year-old has had Glenn and bisegmentectomy IV-V for recurrence 2 years after. The third case was 51 year-old woman how had operated from cholecystectomy and bisegmentectomy. After recurrence, she was operated again for metastasectomy enlarged to the diaphragm. The forth patient was a 54 year-old woman who undergoes a bisegmentectomy and lymphadenectomy. Results: A new hepatectomy was done at 10 month for a recurrent hepatic disease. A metastasectomy was done. She died at 31 month from a new hepatic metastasis. We instituted systemic adjuvant chemotherapy for all 4 cases in postoperative period. The four first patients died at 4, 6, 17, 22 months and the fifth is still alive at 3 month after a new hepatectomy. These cases illustrate thepossibility of iterative hepatectomy for recurrent gallbladder carcinoma. Conclusion: There are a few articles in literatures about recurrent gallbladder carcinoma and especially for iterative hepatectomy. This surgery must have a discussion between a surgeon and patient. Even if the mean survival is not verylong, these cases motivate us to continue in this way. With strict analysis and more elements of judgment, our hope is to improve the survival in the second phase.

Radical surgery of gallbladder carcinoma is still modest for almost cases advanced gallbladder which is the majority of this disease. Radical surgery is possible only for 15% of patients [1]. Overall survival is modest with 5 years survival which does not exceed 10% [2]. Iterative radical surgery remains a possibility more unlikely nowadays. This iterative hepatectomy is well established for the colorectal hepatic metastasis since more than 20 years [3]. We report 4 cases of iterative surgery for recurrent gallbladder carcinoma. All our patients are female.

The first patient was 42 year-old who undergoes a cholecystectomy for biliary lithiasis. The study of histological specimen revealed the presence of pT3 (invasion of serous layer) an adenocarcinoma well differentiated. We completed the surgery with a bisegmentectomy IV-V and extensive lymphadenectomy. The patient received 12 courses of chemotherapy (5 Fluoro-uracile and Cisplatine) and 45 grays of external radiotherapy (Figure 1). 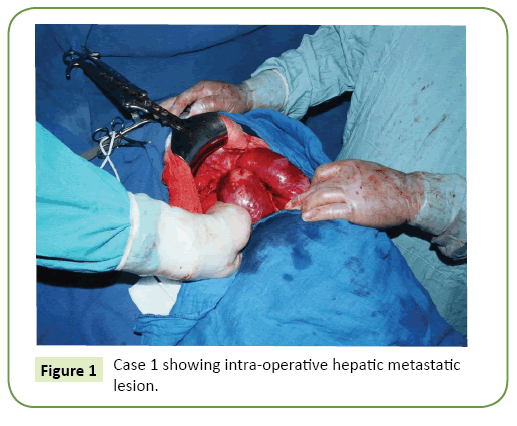 At 24 months on postoperative period, ultrasonography control revealed a liver metastatic lesion with elevation of CEA at 11.25 ng/mL. A CT-scan confirmed the lesion which was located on the segments VI-VII. No other lesion was discovered on the morphological exploration. The CA 19-9 was normal. The operative and ultrasonography exploratory confirmed the metastasis in the segments VI-VII and found another metastasis in the segment III. A bisegmentectomy VI-VII and metastasectomy were performed (Figure 2). The postoperative period was smooth. Three courses of systemic chemotherapy (Gemcitabine and Cisplatine) were instituted. The patient died 6 months after apparition of a new metastatic lesion. Her total survival after cholecystectomy was 30 months (Figure 3). 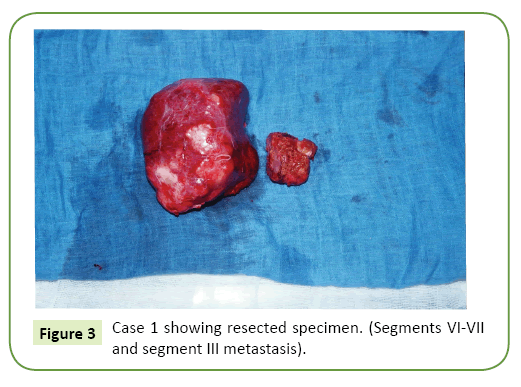 The second patient was 48 year-old who undergoes Glenn resection 2 years ago for gallbladder carcinoma. A recurrent carcinoma was discovered on a CT-scan. The CEA was normal and CA 19-9 was elevated at 97 UI/mL. We discovered a tumor located at segments IV and V which was ruptured in the bile duct. No other lesion was discovered. We performed a bisegmentectomy IV-V enlarged to bile duct and extensive lymphadenectomy after removal of free tumour. A Roux on way loop was anastomosed to bile duct. The postoperative period was passed smoothly and 6 courses of chemotherapies (5 Fluoro-uracile and Cisplatine) were instituted followed by 45 grays of external radiotherapy. 18 months later, a CT-scan showed a new metastasis and patient was reoperated again. The metastasis was located on the jejunal loop and on the vascular side and the resection was not possible. The patient died 22 months after the iterative hepatectomy and 46 months after the Glenn resection.

The third patient was 51 year-old in whom a gallbladder pT3 adenocarcinoma was discovered on the histological specimen after a cholecystectomy done for biliary lithiasis. We performed a bisegmentectomy IV-V with extensive lymphadenectomy. The postoperative course was uneventful. Six courses of systemic chemotherapy (5 Fluoro-uracile and Cisplatine) followed by 45 grays of external radiotherapy was instituted. A recurrent lesion was diagnosed on CT-scan after a rise of CEA from 10 à 28 ng/ mL. The metastasis had 3 cm in diameter and located to the segment VI. We decided to operate a patient. On intraoperative exploration, we found a metastatic lesion located on segment VI and involved diaphragm. We performed a total removal of the metastatic lesion with resection of part of diaphragm. The postoperative period was complicated by a pleural effusion treated by punctures. A systemic chemotherapy was established (Gemcitabine). The patient died 7 months after the iterative surgery and 47 months after cholecystectomy.

The last patient was 54 year-old in whom a gallbladder pT3 adenocarcinoma was discovered on the histological specimen after a cholecystectomy done for biliary lithiasis. A bisegmentectomy IV-V associated with lymphadenectomy were performed at the second operation followed by chemotherapy (Gemcitabine and Cisplatine). A recurrent metastasis was diagnosed at ten postoperative months on CT scan. We carry out a complete removal of metastatic lesion followed by a course of chemotherapy (Gemciatbine alone). A new metastasis was diagnosed in the segment III. The patient could not follow new cycles of chemotherapy because of thrombocytopenia and died at 17 month after the second hepatectomy and 31 month after the cholecystectomy.

There are a few articles in literatures concerning recurrent gallbladder carcinoma and especially for iterative hepatectomy. To our knowledge only Noji et al. [3]. have reported a series of 27 patients with biliary of recurrent cancers (18 cholangiocarcinoma and 9 gallbladder carcinoma). They realized 30 resections of whom 18 hepatectomy (11 minor resections and 7 major resections). They did not specify if hepatectomy were done for gallbladder cancer. The 5 year global survival was 23.5% in resected group and nil for a palliative group. Takahashi et al. [4]. also reported their experience on recurrent biliary cancers. They operated 74 patients from a series of 606 patients with recurrences (135 gallbladder cancer and 471 cholangiocarcinoma). Five hundred thirty-two were not operated on. Survival after recurrence was significantly better in the 74 patients with surgery than in the 532 without (32% vs. 3% at 3 years; p<0.001). Survival after surgery for recurrence was similar between gallbladder cancer and cholangiocarcinome. Their conclusion was that surgical resection for recurrent biliary cancer can be performed safely and offers a better chance of long-term survival in selected. For us, it is not the overall survival, which is currently important, but the possibility to perform a new radical surgery without mortality and great morbidity for gallbladder carcinoma. We insure all means we have to offer for our patients a long survival. We demonstrate that we were able to associate surgery, chemotherapy and external radiotherapy to treat this kind of patient. Tomika et al. [5]. reported a case of a patient treated with chemotherapy and radical surgery with success. In literature there are some case report which were treated with chemotherapy with a real success. As it is known, iterative hepatectomy is well established for the colorectal metastasis [6,7]. Some authors reported interesting results for other tumors [8,9]. These results are immediate or at distance are equivalents to the first resection and especially for the mortality (low than 5%) with 5 year survival between 25 à 35% [7] even if Aramaki et al. [10]. Reported a tendency to more morbidity for iterative surgery for colorectal cancer. The first and great problem to be resolved for the gallbladder carcinoma is its treatment at the time of diagnosis nowadays [1,11]. Nevertheless, for the patients whom benefited from a radical surgery, a regular follow up will discover some patients with resectable tumour and then the surgical team with oncological specialists will struggle with the problematic of a new radical resection. Suggestion that gallbladder carcinoma may be curable if diagnosed as IGBC at an early stage. If the cancer has reached an advanced stage, radical surgery should be performed [12]. We maintain a new radical resection with or without chemotherapy or radiotherapy or both (it is better with these two therapeutic methods), when the recurrent lesion is well localized (without diffuse hepatic metastasis and/or biliary tree and/or peritoneal carcinomatosis) for a patient who could support a new aggressive surgery. Locally advanced unresectable cancers may benefit from neoadjuvant chemoradiation to facilitate a curative resection with a good survival [13]. This kind of surgery must have a discussion between a surgeon and patient. Even if the mean survival is not very long, four cases incite us to continue in this way. In a study conducted by Kobayashi et al., estimates that they try to evaluate the survival and the objective response to neoadjuvant combination therapy with gemcitabine and radiation therapy in patients with biliary tract cancer [14].

Our four cases stress the fact that iterative hepatectomy is possible for patients treated with radical intent for gallbladder carcinoma. In the future, other cases could show us to treat similar cases, to have more patients and more experience. With strict analysis and further elements of judgment, our hope is to improve the survival in the second phase.