Ganglioneuroma is a rare, slow-growing, benign, neurogenic tumor that often originates from sympathetic ganglion cells and rarely from the adrenal medulla, sympathetic nerves and peripheral nerves. Mediastinum and retroperitoneum are the most common locations, but they can be seen in any part of the gastrointestinal system. The patient, who applied to our clinic with abdominal pain and had two hypodense lesions in the liver and pulmonary nodules in the lung, which caused invagination at the terminal ileum-ileocecal valve level as a result of advanced examinations, was performed right colectomy and histopathological diagnosis was reported as ganglioneuroma.

Its clinical expression is variable, leading to different designations in the literature. The polypoid form of ganglioneuromatosis can be solitary, where patients have single colonic polyps composed of spindle and ganglion cells; or multiple, most commonly in the terminal ileum and colon, also known as ganglioneuromatous polyposis. The diffuse form is characterised by hyperplasia of the myenteric plexus and transmural proliferation of ganglioneuromatous tissue in the bowel wall (2). The clinical condition of the patients varies according to the location of the lesion, its spread and its effect on intestinal motility. The most common symptoms are abdominal pain, signs of obstruction, and changes in bowel habits. This condition may affect any segment of the gastrointestinal tract, but the ileum, colon and appendix are most frequently involved (3).

A 44-year-old female patient was evaluated in an external center due to abdominal pain and constipation, and invagination was detected at the level of the terminal ileum and ileocecal valve as a result of abdominal tomography, and 2 hypodense lesions in the liver and nodules in the lung were detected, and she was referred to our center.

In the thoracoabdominal CT, two 10 and 15 mm hypodense lesions in segment 7 in the liver, a 1 cm pulmonary nodule located in the lower lobe of the right lung and cecal 10 * 5.5 cm conglomerated bowel loops were observed. was interpreted as malignancy when taken. Figure 2:Hypodense lesion in segment 7 of the liver. 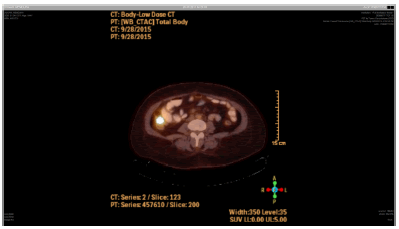 Double balloon enteroscopy was performed by the gastroenterologist and a 5 cm ulcerated lesion protruding towards the lumen at the terminal ileum level was detected. The biopsy result was reported as fibrinoproplated exudate and active granulation tissue.

Diagnostic PET CT was performed on the patient, who could not be diagnosed with the result of biopsy. As a result; Focal increased F-18 FDG uptake was noted in the right lower quadrant, possibly in the ileum (SUVmax: 5. 5).

The patient underwent a right colectomy including the terminal ileum and its pathology was reported as ganglioneuroma.

In the macroscopic examination of the small intestine resection material; In the small intestine segment with a length of 15 cm, an area with an appearance compatible with invagination was observed at one end approximately 1.5 cm from the surgical margin. When the intestine is opened along the lumen, a 4.1*3*1 cm gray-white, well-circumscribed lesion, which is thought to originate from under the mucosa, was observed on the wall of the 8 cm long invaginated bowel segment.

Microscopic examination revealed a nodular submucosal lesion with a well-circumscribed border (Figure 4). It has been observed that this lesion consists of spindle cells and ganglion cells (Figure 5). Cytological atypia and mitotic activity were not observed in the cells forming the lesion. In immunohistochemical examinations, staining was observed only with CD56 in ganglion cells. With the present morphological and immunohistochemical findings, the case was evaluated"ganglioneuroma". Ganglioneuroma is a subgroup of peripheral neurogenic tumors; It is defined as a tumor that originates from the neural crest and develops from migrating neuroectodermal cells (4). Peripheral neurogenic tumors are divided into three subgroups, namely, neuroblastoma, ganglioneuroblastoma, and ganglioneuroma, according to the degree and type of neuroblastic differentiation, malignancy potential, and schwann stroma development (5). Among these, ganglioneuroma is a rare, slow-growing tumor with benign character, often arising from sympathetic ganglion cells or adrenal medulla cells. It is composed histologically from ganglion cells, and includes schwann cells and fibrous tissue.

Although the most common regions are reported as the posterior mediastinum and retroperitoneal area, the adrenal gland is involved in 21% (6). More rarely, it has been reported that they can be seen simultaneously in the mediastinum and retroperitoneal region or they are localized in the parapharyngeal area, bone, gastrointestinal system, and supraclavicular region (3). It is generally encountered in the pediatric age group, 2/3 of the cases are under the age of 20 (7). Because of its slow growth, it is usually diagnosed in late adolescence. Its symptoms are usually caused by the compression of the tumor on the surrounding tissue. In this case, clinical findings such as persistent cough and shortness of breath manifest themselves. In addition to neural compression, dorsal spinal scoliosis, increased catecholamine secretion due to secretory activity and metabolic problems may rarely be encountered (5).

When intestinal ganglioneuromatosis affects the terminal ileum, it causes an increase in the thickness of the intestinal wall, submucosal nodular proliferation and stricture formation. It gives symptoms in the form of abdominal pain and diarrhea. In our patient, as a result of abdominal tomography, an increase in the wall thickness at the ileocecal junction in the right lower quadrant and the interlocking of intestinal segments compatible with invagination at this level are observed.

Increased intestinal wall thickness, luminal narrowing, invagination, presence of mesenteric lymph nodes, nodular hypodense lesions in the liver and lungs, which can be seen in abdominal tomography, can easily overlook the diagnosis of intestinal ganglioneuroma.

The treatment of intestinal ganglioneuromas is surgical resection since it responds poorly to medical therapy. Ganglioneuromas are benign tumors that are curative after excision. Recurrence has not been reported. In very few cases, metastasis to surrounding lymph nodes was found. Intestinal ganglionuromas can be seen with diseases such as Cowden's syndrome, Neurofibromatosis 1, Multiple endocrine neoplasia type 2B.