1University of Antwerp, Department of Medicine, Universiteitsplein 1, B-2610 Antwerp, Belgium

2University of Antwerp, Department of Medicine, Universiteitsplein 1, B-2610 Antwerp, Belgium

Materials and methods: Clinical trial on 72 glaucoma patients, controlled on medication that received SLT as replacement therapy. We compared the effect of SLT on patients with CCT ≥ 550 μm with patients having CCT <550 μm. Primary end point was intraocular pressure and number of medications taken. Measures were made at 1 h, 1 week, 1 month, 3, 6, 12 and 18 months after SLT.

Conclusion: CCT does not influence the outcome of SLT in terms of mean IOP reduction and number of medications needed.

In 1997, Latina et al. launched selective laser trabeculoplasty (SLT) as a new treatment to lower intraocular pressure (IOP) [1]. Since then, SLT has proven to be efficient [2,3] and its use has become widespread. Several studies have been performed to investigate which factors influence the outcome of SLT. Up to now, only higher pre-laser IOP seems to be correlated to higher IOP lowering effect of the SLT [4-6]; other factors like race 6, trabecular meshwork pigmentation [7,8], number and type of previously used anti-glaucoma medications [9,10], previous laser [11,12] and phakic or pseudophakic eyes [13] showed no impact on SLT efficiency. Shazly et al. examined whether central corneal thickness had influence on SLT outcome and suggested that thinner corneas gave better IOP reduction after SLT [14].

CCT is known to have an effect on IOP measurement [15] but some studies suggest that CCT may also give information about tissue properties of the eye that are otherwise difficult to measure [16,17].

The Ocular Hypertension Treatment Study [18] showed that CCT was a strong predictor for the development of open angle glaucoma in patients with ocular hypertension. This was confirmed by the European Glaucoma Prevention Study [19] and the Barbados Eye Studies [20]. Several studies have found that CCT is an important variable in patients with existing glaucoma [17,21-24].

The Early Manifest Glaucoma Trial however, reported that CCT was not a significant predictor of glaucoma progression [25]. Medeiros et al. did identify CCT as a risk factor for development of visual field loss among patients diagnosed with optic neuropathy [21].

The aim of this study is to examine the possible effect of CCT on SLT outcome.

This is a post hoc analysis of data collected in a randomized interventional clinical trial conducted to evaluate use of antiinflammatory drops after SLT. The design of that study has been reported previously [21].

Exclusion criteria were other types of glaucoma than open angle glaucoma, previous glaucoma surgery or previous laser trabeculoplasty. Patients with corneal disease that inhibited good visualization of the trabecular meshwork and those taking systemic steroids were also excluded from the study.

POAG was defined as IOP above 21 mmHg on two separate occasions, open angle on gonioscopy and either glaucomatous visual field defects on Humphrey visual field analyzer, optic disc changes on funduscopy and/or loss of retinal nerve fiber layer on Optical Coherence Tomography (OCT). The diagnosis of OHT was made when an IOP higher than 21 mmHg was measured on two separate occasions in the absence of field or disc changes or defects in retinal nerve fiber layer.

The study was not designed to create additional IOP lowering effect, because IOP was already controlled with medication before treatment with SLT. The main goal of this study was lowering the number of medications needed to maintain adequate IOP control and examine effect of CCT on SLT outcome.

All OCT scans were performed with the spectral-domain OCT RTVue (Optovue, Fremont, USA). We used focal loss of volume (FLV) as determinant for the OCT [26]. CCT was measured at baseline using a handheld pachymeter (iPac Pachymeter, Reichert, Buffalo, NY, USA); the same pachymeter was used for every patient.

The same examiner performed all examinations.

A frequency doubled, Q-switched Nd:YAG laser was used, emitting a wavelength of 532 nm, coupled to a slit lamp delivery system (Selecta Duet laser, Lumenis, Dreieich, Germany). We used single pulses with pulse duration of 3 ns and spot size of 400 μm. The laser energy was initially set at 0.9 mJ and a single laser pulse was delivered at the 12 O’clock position. If a cavitation bubble appeared, the laser energy was reduced by 0.1 mJ increments until minimal bubble formation was observed. Treatment was then continued at this energy level. If no cavitation bubble was observed, the pulse energy was increased by steps of 0.1 mJ until bubble formation [1].

Immediately before the laser procedure a drop of pilocarpine 1% and apraclonidine 0.5% were instilled into the treated eye. After the laser treatment, indomethacin 3 times daily, dexamethasone 3 times daily for one week or no anti-inflammatory drops were administered, following study protocol. The observation that the use of anti-inflammatory drops did not influence SLT outcome was previously published [27].

Patients were examined 1 h, 1 week, 1, 3, 6, 12 and 18 months after SLT. A full clinical examination, comparable to the examinations at baseline, was performed at 6 and at 12 months. After SLT, glaucoma drops were continued until IOP was more than 2 mm Hg below target pressure, at which point they were stopped one by one. A fixed combination of drugs was considered as a combination of two medications; the first step entailed a switch to a single medication. The second drug was stopped if possible, after respecting a wash out period of three months. The number of applications daily was not changed during the study; medication was given at the normal frequency or stopped.

A paired samples t-test was performed to compare baseline differences between the low and the high CCT group for continuous variables (i.e., age, IOP at baseline with medication, BCVA, cup-disc ratio, CCT, visual field mean deficit, OCT FLV, IOPmax before treatment, number of medications at baseline). A χ2-test was used to compare baseline differences in sex and type of glaucoma.

Demographic and baseline characteristics are shown in Table 1.

135 eyes of 72 patients underwent SLT. We met no significant complications or side effects after SLT; data collection was stopped for practical reasons.

No significant differences were present between the high and the low CCT groups in terms of mean age, sex, BCVA, visual field deficits, OCT and medication taken at baseline. This excluded all these factors as possible confounders.

A significant difference was found in IOP before start of medication and IOP at baseline; patients with low CCT had significantly lower IOP at these two time points. Since a thin cornea leads to measuring a lower IOP than the ‘true’ IOP [15], this is not unexpected. There were significantly less patients in the low CCT group diagnosed with ocular hypertension.

A significant baseline difference was also present in the cup disc ratio of the two groups; optic discs were more excavated in the low CCT group. This concurs with other studies that showed glaucoma patients with thinner cornea have higher cups disc ratio [17,22,29]. The visual field and OCT examinations however, showed no significant difference between the two groups [17,30].

All patients received a 360° treatment of the trabecular meshwork. We used a mean number of 102.37 ± 9.34 non-overlapping spots with a mean energy of 1.09 ± 0.31 mJ. The same experienced practitioner (MDK) applied all treatments.

Evolution of IOP and medication

The mean percentage of IOP reduction in eyes with thinner corneas (CCT<550 μm) showed no significant difference compared to the percentage of IOP reduction in thicker corneas at 1 h, 1 week, 3, 6 and 12 months. At 18 months, there was a small rise in mean IOP in the low CCT group, resulting in a negative mean reduction percentage and a significant difference to the high CCT group (Table 2 and Figure 1). The results at 18 months may be somewhat biased by the smaller group of patients at that time.

It is well known that measuring IOP with the Goldmann applanation tonometer (GAT) is influenced by the thickness of the cornea, since the design of the GAT was based on a CCT of 500 μm. Consequently, thicker corneas generally yield higher IOP values and thinner corneas lower IOP readings than the ‘true’ IOP [15,19,22,23,31]. There is evidence to suggest however, that the association between CCT and POAG severity is more than just a tonometry artifact. Several studies have proposed CCT as an independent risk factor for POAG and an important predictor of the evolution of OHT to POAG [18,19,25]. CCT could also be an indicator for an independent mechanism of glaucoma based on the biological properties of ocular tissues like the posterior sclera and the lamina cribrosa [16,29,31,32]. 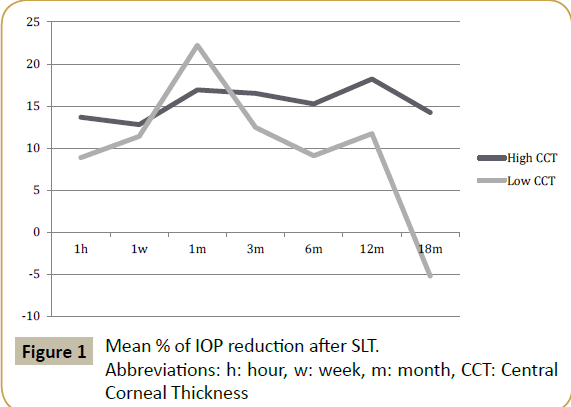 Since SLT relies on biochemical properties of the tissue of the eye [33-35] and CCT may be an index for tissue qualities, it is not unthinkable that CCT should influence the outcome of SLT. 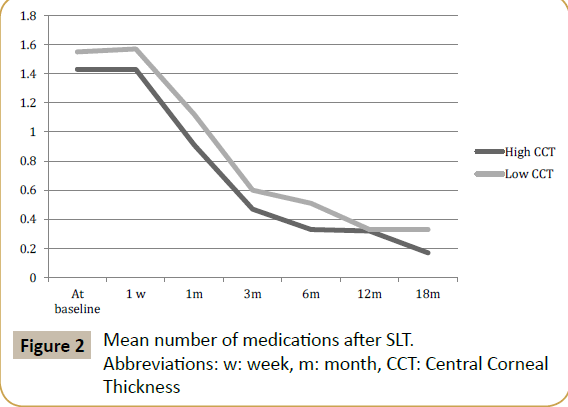 In our study, we recorded a significantly larger cup disc ratio in patients with thinner cornea compared to those with thicker cornea. This concurs with the study of Pakravan et al. who suggested that thinner corneas may be a marker for more deformable discs, prone to the effects of increased IOP [29]. Jonas et al. also described the high association between thin corneas and more pronounced glaucomatous optic nerve, but noticed that thin corneas were not associated with a higher risk for glaucomatous visual field progression [22]. We can agree with this; although the patients with low CCT and those with high CCT showed a difference in cup to disc ratio, we did not record a significant difference in visual field parameters or OCT of the optic nerve head between the two groups.

In our trial, we recorded a comparable percentage of IOP reduction between the high and the low CCT groups at all-time point, except at 18 months. At that point, the number of patients was reduced to about half the number at baseline; this makes the results less reliable.

CCT was obtained using a hand held pachymeter, which is only one of many methods of measuring CCT. Studies have shown that, depending on the method used, different CCTs may be obtained [23]. Also, a larger number of patients would add significance to the results.

At no point in time was there a significant difference between the IOP of the group with high CCT compared to the group with low CCT. SLT can be considered an efficient therapy in glaucoma in patients with both thinner and thicker corneas. 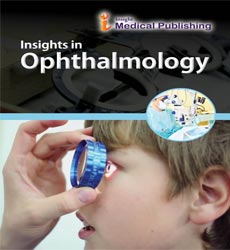