Penaeus monodon is one of the world’s most commercially important cultured penaeid shrimp. About two decades ago, rapid development and expansion of prawn farming occurred throughout much of southeast Asia [1,2]. Since then, China has successfully used artificial breeding technology and directional selection to improve P. monodon yield [3-5]. Selective breeding is essential to increase efficiency and profitability of production, with body weight among the key selective breeding traits that drives profitability in P. monodon farming [6]. However, determining body weight is frequently difficult due to measuring locations, tools and environments, and thus morphological indicators such as body length and carapace length are often preferable and easier to obtain. Understanding the relationships between body weight and other morphological characteristics is therefore vital for selection [7]. 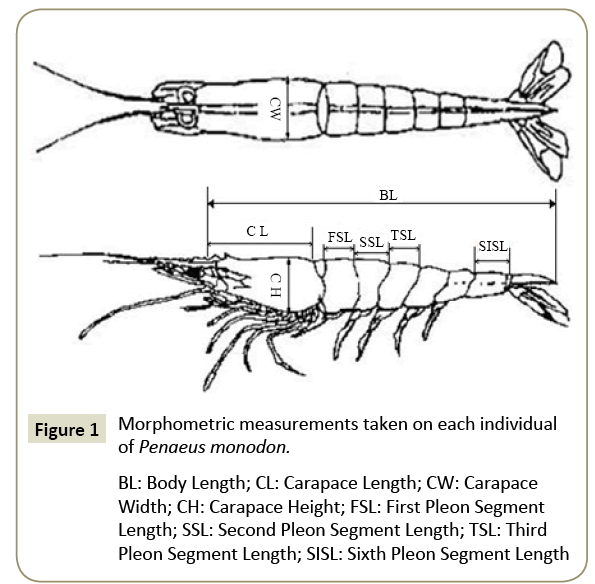 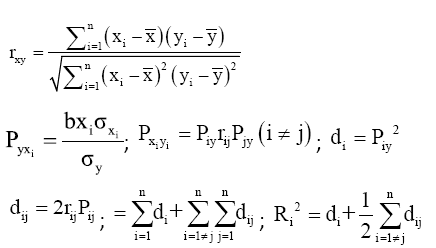 The regression equation linear model of quality traits Y was as follows:

Descriptive statistics of the P. monodon samples are presented in Table 2. The coefficients of variation (CV) reflected the varying degrees within the samples. The CVs estimated for morphological characteristics within the samples were different from each other, with the CV estimated for BW the highest (42.98%), suggesting that BW exhibited considerable variation, which is an advantage for the selective breeding of P. monodon.

The correlations were highly significant for all variables (P<0.01, Table 3), indicating that the variables had important practical significance for correlation analysis. Results showed that BW was positively correlated with all other variables, and the order of relevance was

The significant correlation between BW and all other traits made it difficult to assess the major factors associated with BW from simple correlation analysis alone. Therefore, path coefficient analyses between each trait and BW, including endogenous and dependent or exogenous and independent variables, were performed to clarify the relationships. The results showed that CL and CW were highly significant and significant to BW, respectively (Table 4), suggesting that these two morphological traits had strong direct effects on BW. The direct effect of BL on BW was obviously greater than the indirect effect of BL on BW through other traits. In addition, while the correlation coefficient between CW and BW was very large, the direct impact on BW was small. This indicated that the indirect effect of CW on BW (via other traits) was much larger than its direct effect, suggesting that CW affected BW through BL indirectly.

Table 4: Path analysis of the effects of various traits on body weight of P. monodon.

Predicted by the regression equation, no significant differences were found between the estimated and actual observed values. Thus, the above equation can be used conveniently and reliably in actual production.

Phenotype correlation coefficients are used to comprehensively reflect relationships among variables. Since the influence of other variables is not eliminated, the direct effect of the independent variables on the dependent variables and their indirect effect through other independent variables may act against each other, and consequently phenotype correlation may be unable to accurately explain the relationship among all variables. Conversely, path coefficients are standardized partial regression coefficients that can differentiate direct and indirect effects without being influenced by other variables, and can therefore accurately reflect the relative importance of the results [16,17]. Our study showed that all nine quantitative traits of P. monodon showed positive correlations to each other, though the correlation coefficients between BW and BL (0.985), BW and CW (0.973), BW and CH (0.964) and BW and CL (0.962) were higher those between BW and SSL (0.776), BW and TSL (0.817) and BW and FSL (0.868). These results suggest that the four above mentioned variables exhibited a stronger influence on BW compared with the other traits, which is in accordance with the path coefficient results reported by Li et al. [18] and Zhang et al. [19] for Exopalaemon carinicauda and Exopalaemon modestus, respectively. However, correlation analysis alone cannot determine whether the traits with the largest correlation are the major factors that affect the dependent variables. Therefore, we used path analysis to not only reflect the relationship between variables, but also categorize the relationships between characteristics into direct and indirect effects, and thus determine the major factors affecting the BW of P. monodon.

The main independent variable influencing a dependent variable can be determined when the sum of the multiple coefficient, or the sum of the single determination coefficient of variables to the dependent variable, or the sum of the pairwise coefficient are equal to or higher than 0.85. In this study, the summed (total) determination coefficient of BL and CW to BW was 0.952, indicating that BL and CW were the main characteristics that influenced BW. Hence, as far as P. monodon is concerned, morphological characteristics showed significant regression correlation with BW and indicated that path coefficient analysis was suitable for determining the real relationship between morphological traits and BW, as observed in Zhang et al. and Li et al. Due to the high genetic correlation between BL, CL, CW and CH, it would be appropriate to select BW and BL followed by CW as the main selection characteristics in the breeding of P. monodon.