Development of a rapid, sensitive and specific liquid chromatography-electron spray-mass spectrometry (LC-ESI-MS) method as an effective tool for identification of different types of alkaloids from Aconitum chasmanthum collected from Sopi Kargil that can be used for quality checking of aconitum formulations. Chromatographic separation were achieved on C18 column and peaks determined by mass spectrometry in positive and negative modes. Chromatographic conditions were optimized to obtain high resolution and short run time. Use of the validated method led to tentative identification of seven alkaloids heterophylisine, atidine, atisine, chasm aconitine, 3-bichaconine, neoline and heteroatisine out of the twelve alkaloids picked from total ion chromatogram at the retention time of 1.74- 13.75 m on the basis of their retention times and fragmentation patterns in MS-MS data. Results showed that the positive mode response was much higher than the negative ion mode as most of the characteristic and adduct peaks were obtained in positive mode. Moreover this method has proved to be an effective tool to analyse the components of especially endangered plant species and can be used in quality control.

Aconitum chasmanthum stapf.ex Holmes. is the botanical name of a plant commonly called vatsanabha (classical), Aconite, Monk’s hood, Holf’s bane (English), bachnak, beesh, atees (urdu), banbalang, mohri, mohand (kashmiri) which belongs to family renunculaceae. It is an erect, perennial herb with biennial, paired and tuberous roots. Stem is simple and erect bearing numerous leaves around 50-100 cm high. Inflorescence is long, narrow, stiff raceme over 30 cm long. It bears white or bluish flowers with oblong follicles. The flowering season is from july-september [1]. It has a wide distribution in sub alpine and alpine regions of western Himalayas from Chitral and Hazara to Kashmir and Lahul between altitudes of 2100-3600 m. It is also found in the mountains of Assam and sub alpine grasslands of Himachal Pradesh. The genus Aconitum has over 250 species [2]. Different species of Aconitum [3] with their distribution in the Himalayas and medicinal importance have been given by shah. Genus Aconitum is enlisted as endangered medicinal plant in Red Data Book. The factors like overgrazing, prolonged seed dormancy, seedling mortality and unsustainable exploitation of plants in conditions other than their natural habitat have increased threat to natural population of medicinal plants. Research studies on A. sinomontanum [4] has revealed that chilling is the prerequisite condition for overall improvement in seed germination. Similarly the low temperature condition was reported to be the requirement for embryo growth in A. lycoctonum. Besides, the low pollen germinability in alpine conditions is responsible for poor seed set. Pollen fertility can aid in the successful adaptation of plant species. Recovery and conservation of threatened species is possible through use of reproductive biology [5]. Conservation and commercial cultivation of the endangered species is possible through effective breeding programs. Conservation by cultivation may prove to be lucrative as it is trouble free. Some standard methods are to be developed by scientists and researchers for benefit of farmers in particular and consumer in general. Tissue culture can greatly aid in the conservation of threatened Aconitum sp. As small amounts of plant material can generate a large number of disease free propagules which can be retaken to their native habitats. It also helps in broadening the genetic database, augmenting the yield and production of active secondary metabolites. It has the potential to act as the source of future plant based medicines. On account of increased demand for herbal products, the concern for increasing the secondary metabolite production through genetic engineering is gaining significance. Different species of Aconitum are rich in diterpene alkaloids and flavonoids with wide spectrum of activities. Alkaloids like mesaconitine, aconitine, hypaconitine, heteratisine, heterophyllisine, heterophylline, heterophyllidine, atidine, hetidine, hetsinone and benzoylheteratisine have been reported from different species of aconitum [6]. Although highly toxic, Aconitum tubers are used as herbal drugs after heat or alkaline treatment resulting in reduction in toxicity on account of deacetylation, debenzoylation and oxidation. The processed tubers have shown lesser alkaloid content than unprocessed ones when separated by modified the HPLC method using C18 column gradient eluted with acetonitrile and ammonium bicarbonate buffer [7]. Eleven diterpene alkaloids were isolated from Aconitum with oxazolidine8 ring containing isoatisine and coryphine being the most active ones. Seven C19 norditerpenoid and a C20 diterpene alkaloid have been reported in Aconitum jaulense [9]. A new alkaloid 8-O-Azeloyl-14- benzoylaconine was reported from the roots of Aconitum karacolicum [10]. 6- dehydroacetyl-sepaconitine and 13- hydroxylappoconitine, two new norditerpenoids and Heterophylline A, Heterophylline B were reported from the roots of Aconitum heterophyllum Wall [11, 12]. Spicatine A and Spicatine B, two new norditerpenoids were isolated in A. Spicatum [13]. Swatinine, 4[2-(methoxycarbonyl) anilino] 4-oxobutanoic acid, delphatine, lappaconitine, puberanine and Nacetylsepaconitine have been isolated from A. Leave Royle. Two flavonoids Quercitin and kaempferol derrivatives with two known flavnol glycisides clovin and robinin have been isolated and identified from roots of A. anthora L [14]. liquiritigenin and liquiritinflavonoids were reported from A. carmichaeli [15].

The root part of Aconitum chasmanthum (15 Kg) were collected from sopi-a place 85 km away from Kargil Ladakh (J&K, India) in august 2010. The specimen was identified by Akhtar H. Malik, Curator, Centre for Biodiversity & Taxanomy, University of Kashmir (Specimen deposited under accession No. 341320 and Collection No. 1300- Bilal, Kash).

The air dried, finely powdered root material (5Kg) was extracted for 72 hours with methanol to afford the respective extract, which was concentrated under reduced pressure and was coded as ACE.

The analyses were obtained based on an Angilent 1260 infinite series, which consisted of a pump, Autosampler, detector and a column component. The chromatographic separations were performed on chromo lith RP-18e column (4.6mm ID, 50mm length) which was maintained at room temperature. Mobile phase consisted of (A) aqueous formic acid (0.1%) and (B) methanol, with the gradient elution as follows:0-8 min, 12%-25% B; 8- 12 min, isocratic at 25% of B; 12-16 min, 25%-40% of B; 16-40 min, 40%-50% of B, 40-50 min, 50%-100% of B. The flow rate was 1ml/min. The optimized chromatographic conditions like selection of mobile phase are used to obtain a good resolution and short run time. The use of 0.1% formic acid has been adopted to increase ionization efficiency and improve peak shape.

For LC-ESI-MSn experiments, LCMS QqQ-6410B equipment (Agilent Technologies) comprising a chromatographic system 1260 Infinity (Agilent Technologies) coupled with an Agilent Triple Quad mass spectrometer fitted with an ESI source was used. The conditions of ESI source were set as follows: sheath and auxillary gases flow, 25 and 3 arbitrary units, respectively; spray voltage, 4KV; capillary temperature 325oC and tube length voltage: 120 V. The samples were analyzed in both positive and negative modes and full scan mass range was set between m/z 100- 1200 with the acquisition of centroided-type mass spectra. Accurate mass analyses were calibrated according to manufacturers guidelines. In the MSn experiments, data dependent MSn scanning was performed to minimize total analysis time as it can trigger fragmentation spectra of target ions and prevent repitition by dynamic exclusion settings. The software of the Agilent technologies was used for data analysis. After the automated removal of noise and baseline signals, the theoretical extract chromatogram of main alkaloids was shown in the plot (fig. 1).

For LC-MS experiments different fragmentation measurements were conducted in independent LC-MSn experiments. In the first measurement the survey scan was performed in analyser at (R=30,000) followed by MS2 scan at (R=15,000). The accurate tandem mass spectra can provide strong evidences for identification of fragments and neutral loss. In the separate measurement in which ESI MS2 and MS3 experiments using dynode detection provided more fragment ions and order of fragmentation could be determined to show evidence of structural identification. Twelve alkaloids were picked from the chromatogram at the retention times from 1.74-13.75 min. Among them seven compounds were identified as heterophyllisine, atidine, atisine, chasmoaconitine, 3- bichaconine, neoline and heteroatisine by comparing their retention times and on the basis of their fragmentation patterns in MS-MS data. The other compounds were tentatively identified by comparing their mass data with those reported in literature. The Retention time values and mass data of deduced compounds from the peaks are summarized in table 1. The fragmentation patterns of the identified compounds are shown in (fig. 2a to2e). 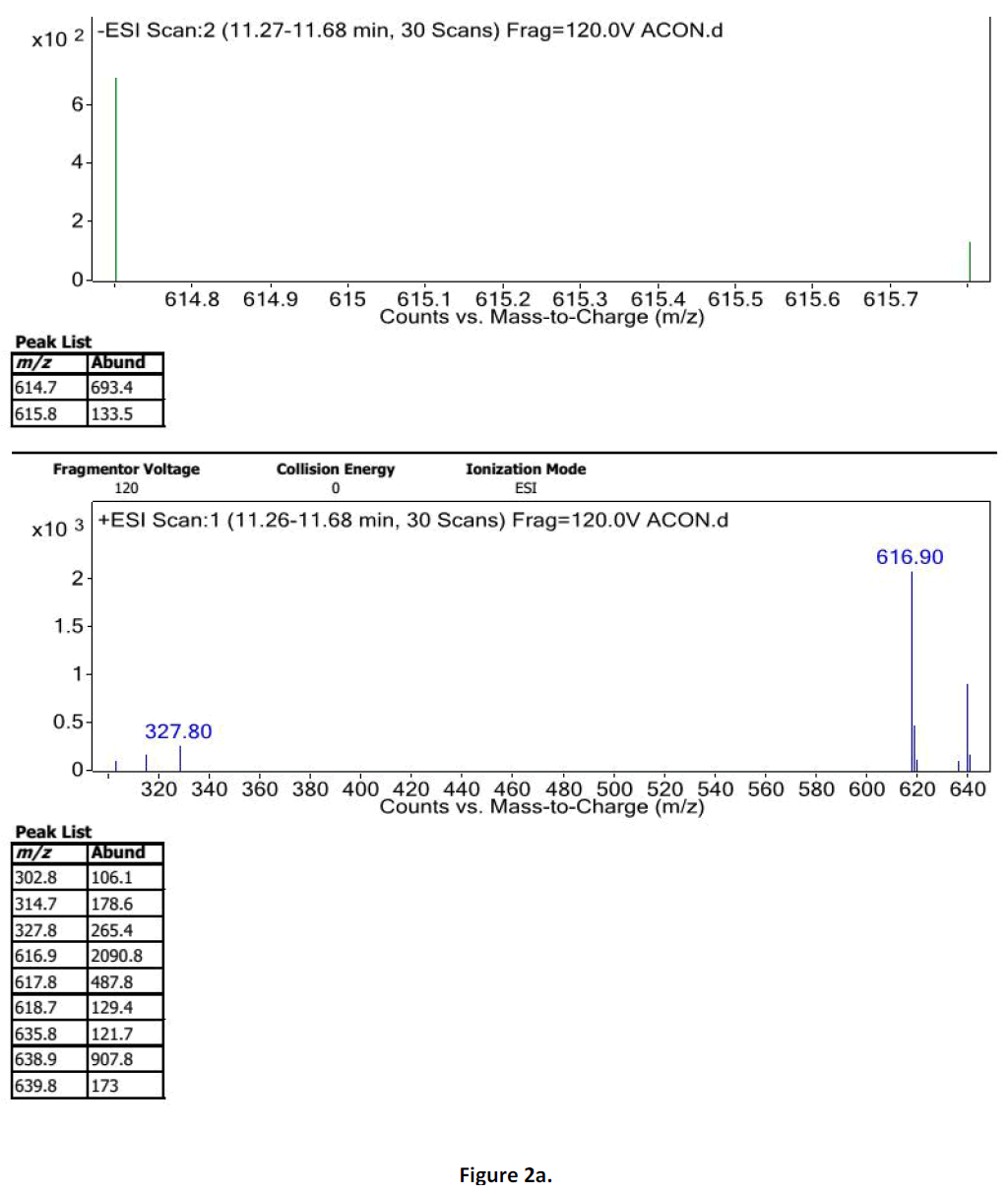 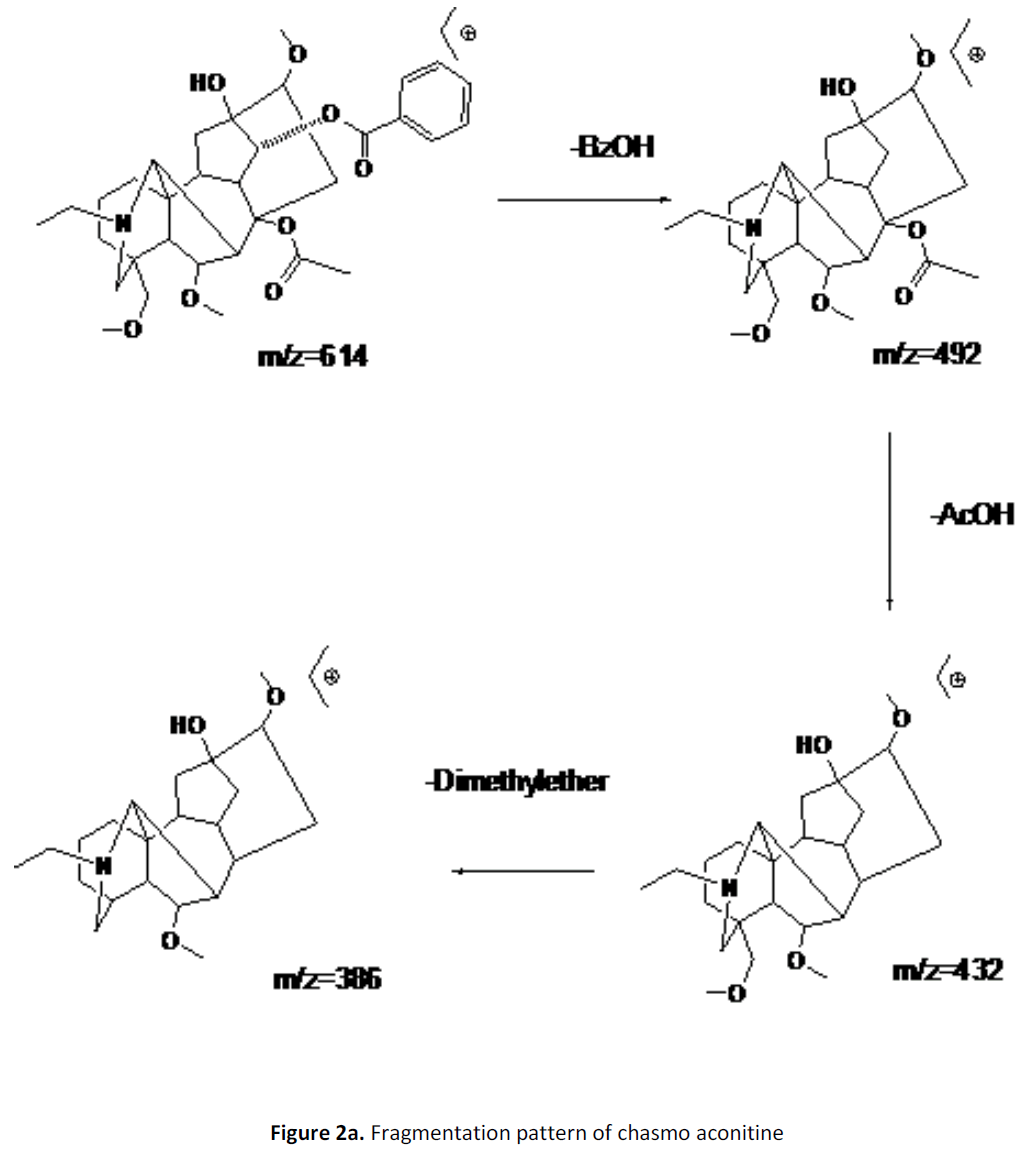 Figure 2b: Fragmentation of neoline 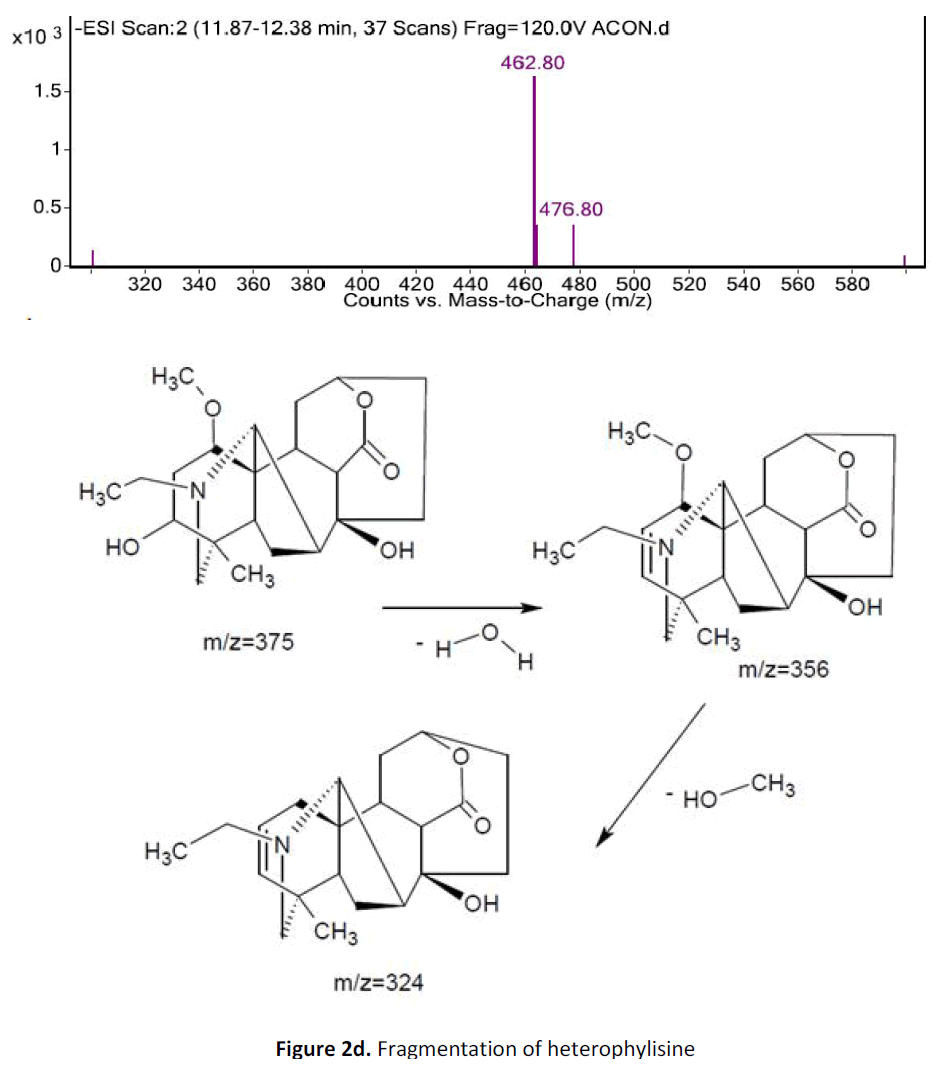 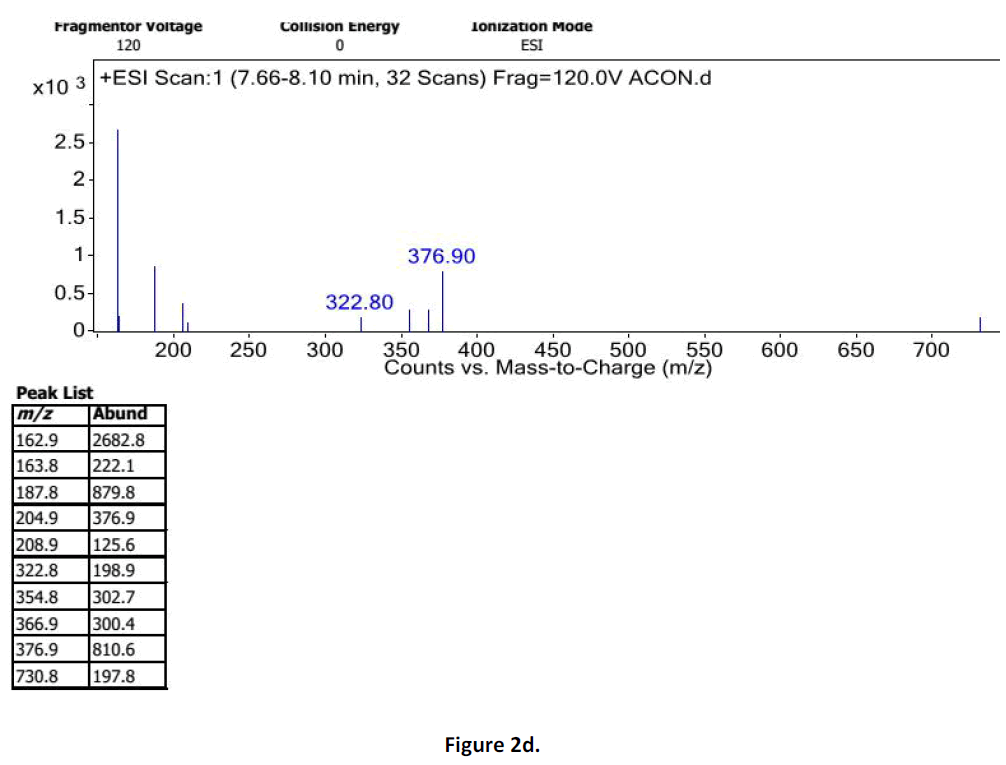 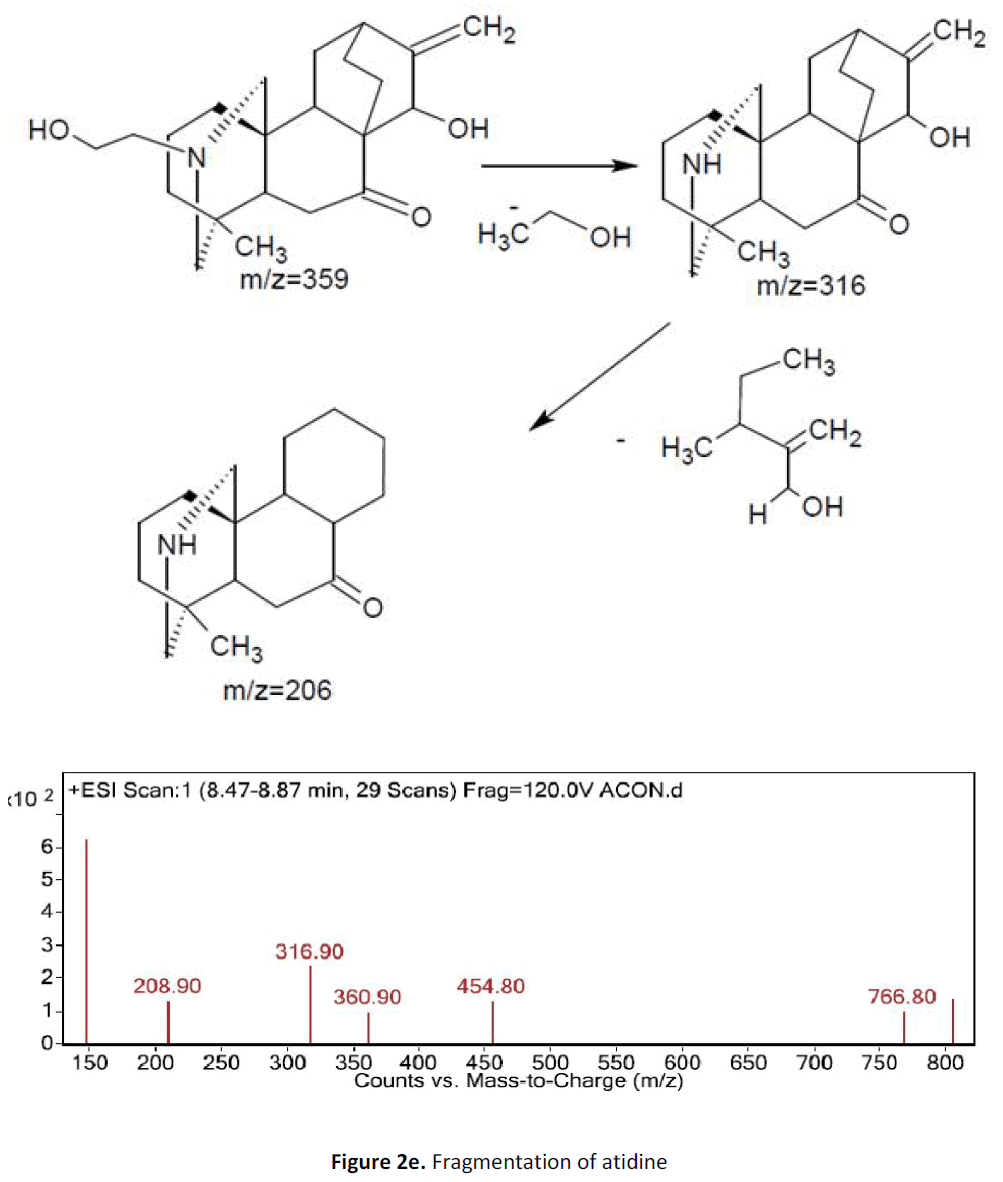 In this study a simple and efficient LC-ESI-MSn method has been developed for providing a sensitive and applicable tool for determination and identification of alkaloids from the roots of aconitum chasmanthum which can also be used in other Aconitum herbs and their formulations. Moreover the LC-ESI-Mass spectrometry has been demonstrated to be an effective tool for analysis of the components and searching of novel compounds in plant extracts of especially endangered plant species. It also provided the essential data for further pharmacological and toxicological studies on Aconitum plants.