Copyright: © 2018 D’souza M, et al. This is an open-access article distributed under the terms of the Creative Commons Attribution License, which permits unrestricted use, distribution, and reproduction in any medium, provided the original author and source are credited.

There are many radiological manifestations of lung injury secondary to medication. Many of these pathologies have overlapping patterns on imaging, so classification can be a challenge. The most common presentations on high resolution CT are described in this pictorial essay. Also depicted are the common causative agents and their associated patterns of lung injury.

Many pharmacological agents have the potential to cause lung damage. This damage can either be acute or chronic. More than 100 cytotoxic and non-cytotoxic agents have been reported to cause pulmonary toxicity, and as more pharmaceuticals are developed, the number of causative agents is increasing. Other causes of lung injury must be ruled out before diagnosing drug-induced pulmonary toxicity, however, it should be considered in patients with new onset or progressive, respiratory complaints that correlate with the introduction of a new medication and improve on cessation of the drug.

Diffuse alveolar damage is commonly caused by cytotoxic chemotherapy agents such as: bleomycin, cyclophosphamide, carmustine, and mitomycin. Other iatrogenic causes may be found in Table 1.

Table 1: Patterns of pulmonary lesions and their causative agents.

The commonest drug causes are amiodarone and carmustine. Methotrexate, chlorambucil and leflunomide have also been implicated.

Hypersensitivity reactions are mediated by the active immune system. The immune damage may be caused by drugspecific antibiotics, or drug-specific T cells. Deposition of antibody-drug complexes further perpetuates the reaction. Lymphocytes and plasma cell infiltrates lead to alveolar inflammation and subsequent damage to the lung parenchyma.

Nitrofurantoin and immunosuppressive drugs such as methotrexate, sulfasalazine and gold salts are known causes of hypersensitivity reactions.

Common drug causes are NSAIDs, para-amino salicylic acid, ACE inhibitors, nitrofurantoin, penicillamine and sulfasalazine. Cessation of the offending agent and treatment with steroids are the mainstay of management.

BOOP, also known as cryptogenic organizing pneumonia, is an inflammation of the bronchioles and surrounding tissue. It is characterized by proliferation of immature fibroblasts, called Masson bodies, causing polypoid plugs within respiratory bronchioles, alveolar ducts and alveolar spaces.

Anticoagulants are common used drugs that can cause pulmonary haemorrhage. Other drugs are listed in Table 1.

ARDS is characterized by diffuse injury to alveolar cells, leading to surfactant dysfunction, abnormal coagulation and activation of the innate immune response. This leads to non-cardiogenic pulmonary oedema and impaired gas exchange in the alveoli [4].

This is a rare form of pulmonary hypertension, characterized by progressive intimal fibrosis and occlusion of pulmonary veins, leading to high pulmonary arterial pressures.

HRCT may show main pulmonary artery enlargement, ground-glass opacities in a centrilobar distribution, and mediastinal lymphadenopathy. However, lung biopsy may be required to make a definitive diagnosis [5].

The usual drugs responsible are cytotoxic agents such as bleomycin, mitomycin and carmustine.

Amiodarone: Lung disease usually develops within months of initiating therapy in susceptible individuals. There is usually no correlation between dose or duration of treatment and development of pathology. Those most at risk are the elderly and patients administered a daily dose of greater than 400 milligrams. The pathology most often seen with Amiodarone is NSIP, pleural effusions and BOOP (Figure 1a). Usually patients respond well to cessation of amiodarone therapy (Figure 1b), although some may progress to death. 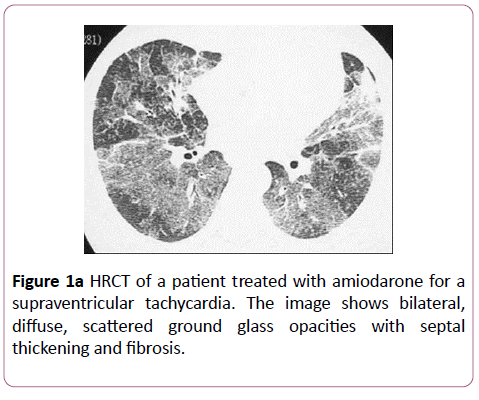 Figure 1a: HRCT of a patient treated with amiodarone for a supraventricular tachycardia. The image shows bilateral, diffuse, scattered ground glass opacities with septal thickening and fibrosis. 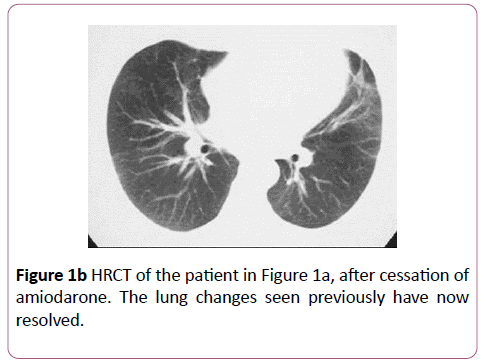 Figure 1b: HRCT of the patient in Figure 1a, after cessation of amiodarone. The lung changes seen previously have now resolved.

These features are consistent with a diagnosis of nonspecific interstitial pneumonitis.

Captopril: Captopril is an angiotensin converting enzyme inhibitor used to treat hypertension. Eosinophilia is a common side effect of captopril therapy, which rarely manifests as an eosinophilic pneumonia (Figure 2). There is symptom resolution upon discontinuation of the drug. Figure 2: HRCT shows focal areas of consolidation due to eosinophilic pneumonia in someone receiving captopril therapy.

Nitrofurantoin is an uncommon cause of drug-induced lung disease. An acute reaction mimics hypersensitivity pneumonitis, and occurs within 2 weeks with an eosinophilia, fever, dyspnoea and cough. Imaging shows bilateral, diffuse, basal heterogeneous opacities. Chronic toxicity occurs months to years after therapy. The most common presentation is nonspecific interstitial pneumonitis (Figure 3a), although it can rarely present as BOOP. Nitrofurantoin induced lung disease has a good prognosis and responds to cessation (Figure 3b). 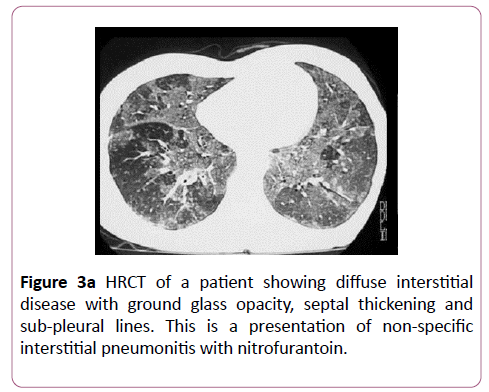 Figure 3a: HRCT of a patient showing diffuse interstitial disease with ground glass opacity, septal thickening and sub-pleural lines. This is a presentation of non-specific interstitial pneumonitis with nitrofurantoin. 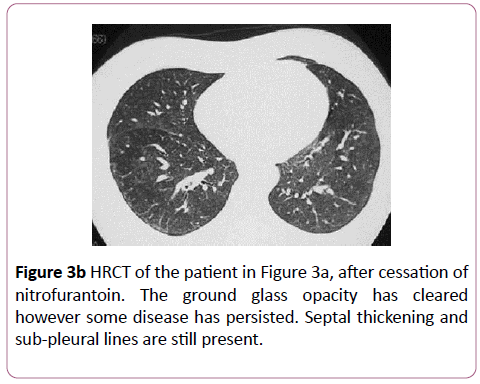 Figure 3b: HRCT of the patient in Figure 3a, after cessation of nitrofurantoin. The ground glass opacity has cleared however some disease has persisted. Septal thickening and sub-pleural lines are still present. 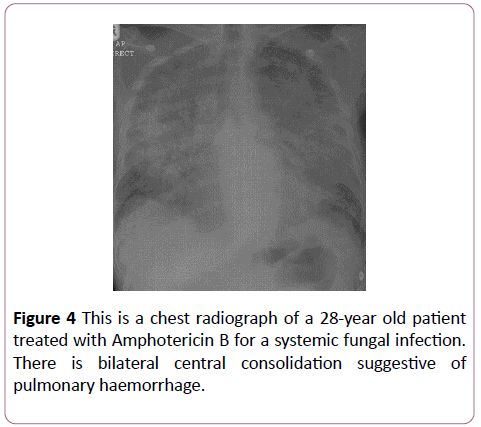 Figure 4: This is a chest radiograph of a 28-year old patient treated with Amphotericin B for a systemic fungal infection. There is bilateral central consolidation suggestive of pulmonary haemorrhage.

Methotrexate is commonly used to treat rheumatological conditions. 5-10% of those treated develop some lung disease. This occurs within months of therapy, with no relation to dose or duration of treatment. NSIP and hypersensitivity pneumonitis (Figure 5) are most commonly seen with methotrexate treatment, and these usually improve on stopping the drug. 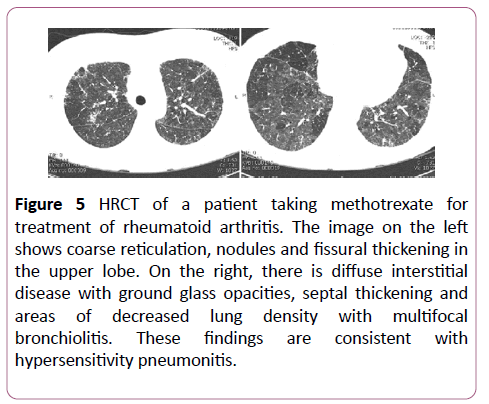 Figure 5: HRCT of a patient taking methotrexate for treatment of rheumatoid arthritis. The image on the left shows coarse reticulation, nodules and fissural thickening in the upper lobe. On the right, there is diffuse interstitial disease with ground glass opacities, septal thickening and areas of decreased lung density with multifocal bronchiolitis. These findings are consistent with hypersensitivity pneumonitis.

Gold salts are also used to treat rheumatological conditions. 1% of these patients go on to develop lung disease within 2-6 months of initiating therapy. DAD, NSIP and BOOP are the usual pathologies found with gold salts (Figure 6) and cessation has a good response. 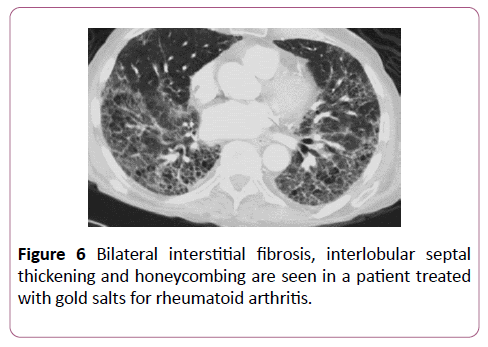 Sulfasalazine is used to treat inflammatory bowel disease and inflammatory arthritis, although its use has decreased in preference for the 5-aminosalicylic acid derivatives which have a more acceptable side effect profile. The lung lesions caused by this drug can be variable (Figures 7a-7c). 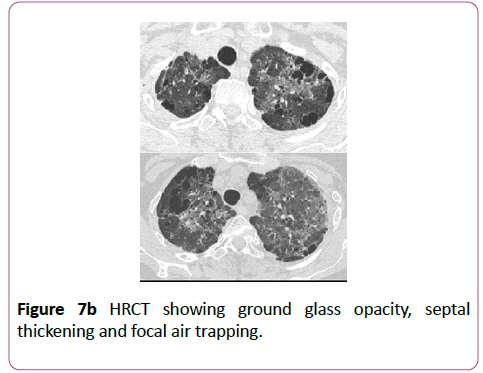 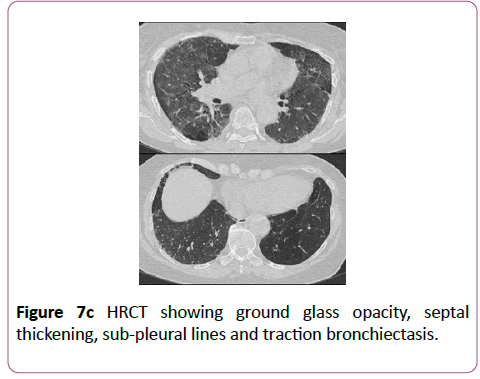 Penicillamine is primarily used as a chelating agent in the treatment of Wilson’s disease. It can also be used as a disease modifying agent in patients with severe rheumatoid arthritis that have failed to respond to conventional therapy. Penicillamine has been reported to cause BOOP (Figure 8). 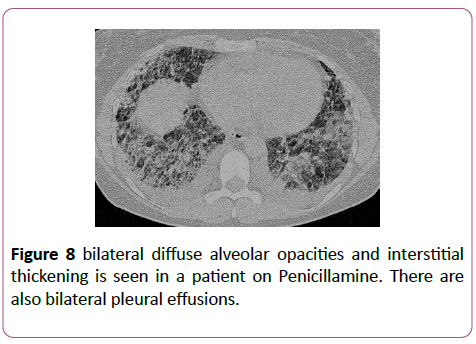 Figure 8: bilateral diffuse alveolar opacities and interstitial thickening is seen in a patient on Penicillamine. There are also bilateral pleural effusions.

Cyclosporine is an immunosuppressive agent used as posttransplant prophylaxis against graft rejection. It can also be used to treat rheumatological conditions. Non-cardiogenic pulmonary oedema is a complication of cyclosporine treatment (Figure 9). 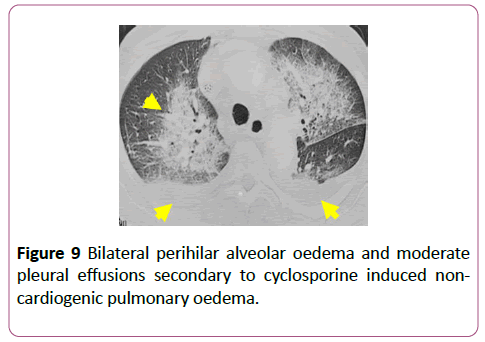 Bleomycin is one of the most commonly implemented drug. The risk of developing lung disease is increased with a cumulative dose of >450 units. Additionally, being elderly, or having a history of oxygen therapy or irradiation are risk factors. Reinstitution of bleomycin treatment within 6 months of cessation also increases risk.

Bleomycin can cause lots of lung pathologies but the most commonly seen is diffuse alveolar damage, then non-specific interstitial pneumonia and BOOP (Figure 10). Bleomycin related lung damage is associated with a poor prognosis, with respiratory failure in 3 months [6]. 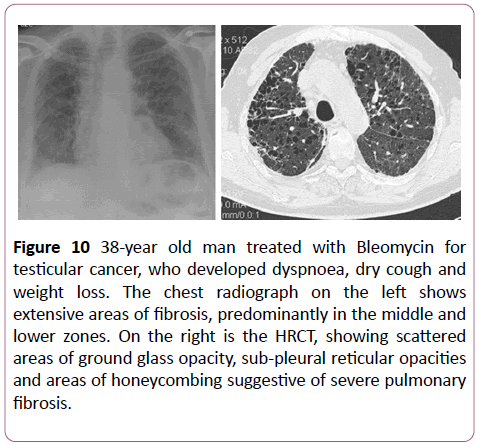 Figure 10: 38-year old man treated with Bleomycin for testicular cancer, who developed dyspnoea, dry cough and weight loss. The chest radiograph on the left shows extensive areas of fibrosis, predominantly in the middle and lower zones. On the right is the HRCT, showing scattered areas of ground glass opacity, sub-pleural reticular opacities and areas of honeycombing suggestive of severe pulmonary fibrosis.

20-30% of patients treated with carmustine develop druginduced lung disease. There is a clear relationship between cumulative dose and lung injury; if the cumulative dose is greater than 1.5 gm/m2, more than 50% of the lung is affected. A history of radiation increases the risk of developing lung disease. The pathologies most associated with carmustine are DAD and NSIP (Figure 11). 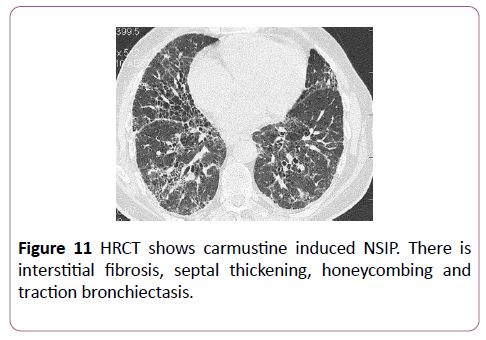 Unlike carmustine, there is no relationship between the dose of cyclophosphamide and the severity of lung injury. The onset of symptoms can be variable with some developing symptoms 2 weeks after treatment, some 13 years after. DAD is the most common lung pathology seen, however HSIP or BOOP can also occur (Figure 12). The prognosis is usually improved with discontinuation of cyclophosphamide. Figure 12: 45-year old man on cyclophosphamide. The chest radiograph on the left shows bilateral hazy ground glass opacities and fine reticular shadows, worse in the right lung. The HRCT on the right shows bilateral, heterogeneous ground glass opacity and thickened interlobular septae. There is distortion of the architecture and traction bronchiectasis in the right lung, suggestive of pulmonary fibrosis. These features are consistent with diffuse alveolar damage secondary to cyclophosphamide therapy.

Drug induced damage should be suspected in patients presenting with new or progressive respiratory symptoms, and receiving medications known to cause pulmonary toxicity, particularly chemotherapeutic agents. The clinical and radiological findings in drug-induced lung disease can be nonspecific and may imitate non-drug related disease processes, such as infection.

It can be difficult to determine the aetiology of lung lesions without histological confirmation of the underlying pathological process. Thorough drug histories are essential to identify iatrogenic causes for the lung injury, as different medications are associated with different patterns of radiological lesions. As more pharmaceuticals are developed, the list of causative agents will undoubtedly increase. Identifying the pulmonary reaction and underlying cause can improve the management of iatrogenic lung disease.