Herbal and Medicinal Plants Molecules Towards Treatment of Cancer: A Mini Review

Cancer is one of the leading and most fatal diseases in the present decade, every year millions of people die because of various types of cancers. Many aspects relate to the cause of disease besides heredity, food habits, smoking, nutritional behaviours, radiation etc. The successful cancer therapy till now has been under research, only chemotherapy and radiation treatments are at times successful and much times toxic and lethal. Alternative and less toxic medication is very much in need towards the disease, the use of concepts of herbal medicine with knowledge of Ayurveda could present better drug leads towards the inhibitory treatment of Cancer. Nature shows plethora of medicinal plants with anticancer and antioxidant activities which may suppress the disease completely. The search for cancer drugs from natural sources started in late 1960s, lead to discoveries of vincristine, vinblastine, campthothecin and taxol. This review certainly focuses on the herbal medicine from natural products for the discovery of new drug leads towards the cancer treatment.

Natural products especially plants have been used for the treatment of various diseases promisingly from the decades by knowledge of Ayurveda in our country. In developing countries herbal medicine is the source of new discoveries for the new drug leads towards various healthcare issues and synthesis of new formulations. Traditional medicine when compared to other sources of drug discoveries had contributed many novel therauptic compounds for preventive and curative medicine. Secondary metabolites like polyphenols, terpenes and alkaloids have been reported to possess antimutagenic and anticancer properties in many studies [1]. Several researches on cancer drugs and discovery of new lead molecules towards anticancer activity by using medicinal plants was put forward, reason to explain- as medicinal plants are reservoirs of antioxidants and possess no toxicity as compared to the modern drugs; concept of combining Ayurveda with advanced drug discovery may bring some lead compounds towards various human sufferings.

Cancer is one of the most life threatening diseases and possess many health hazard in both developed and developing countries [2], characterized by irregular proliferation of cells. Every biological change can be seen when a normal cell progresses to cancerous one. Since many treatments are available for cancer therapy still cancer is the 2nd leading cause of death in the globe, Chemotherapy and modern drugs for treatment of cancer reported more side effects in the patients treated. Every year, millions of people are diagnosed with cancer, leading to death [3]. Cancer kills about 3500 million people annually all over the world; it accounts more than 2-3% of the annual deaths recorded worldwide [4]. Treatment of Cancer is somewhat successful with chemopreventive agents but usage is left against risk because of their toxicity [5,6]. Smoking, dietary imbalances, hormones and chronic infections leading to chronic inflammation accounts high casuals for cancer disease. In view of serious side effects of chemotheraphy and radiation treatment for cancer, there should be immediate search for alternative and safer methods of treatment [7]. As age old saying always prevention is better than cure, cancers can be preventive by proper dietary habits, saying no to tobacco, treatment of inflammatory diseases effectively, and taking nutritional supplements that aid immune functions [8]. Chemotherapy, presently the only major treatment modality used for the control of advanced stages of malignancies, exhibits severe toxicity on normal tissues [9,10]. The search for cancer drugs from natural sources started with discovery of Podophyllotoxin in late 1960s, further lead to discoveries of vincristine, vinblastine, campthothecin and taxol [11]. Nature counting more than 1000 species of plant varieties which possess significant anti-cancer properties. Taxol, one of the most outstanding agents, has been found beneficial in treatment of refractory ovarian, breast and other cancers, Podophyllotoxin, synthetic modification of this molecule led to the development of Etoposide, known to be effective for small cell cancers, of the lungs and testes [12]. The discovery of medicinally important herbs and their mechanism of action would provide an alternative and effective treatment towards the cancer prevention. Since decades plethora of drugs have been developed from potent compounds which are isolated from medicinal plants. The process of drug discovery and development includes three main following research approaches

(1) Bioactivity- based on mechanism of specific action-directed isolation and characterization of active compounds,

(2) Rational drug design - involves modification and synthesis of analog, and

Traditional medicine and knowledge of Ayurveda help in the discovery of new drug leads with high activity and low toxicity for cancer therapy, initial research focuses on the isolation of bioactive lead compounds, chemical modification and improving other pharmacological profiles [13]. The use of traditional medicine for treatment of various diseases is continued in the Indian sub-continent with greatear botanical diversity. Ethno historical accounts shows that medicinal plants have been used as a remedy for various human ailments, the reason of using these plants is that they are reservoirs of potent chemical compounds which acts as a curative medicine with fewer side effects. Over the past decade, healthcare system is all around the herbal medicine and gained global importance, making an impact on both world health and international trade [14]. Due to the low economic rate of the majority of population in developing countries and high cost of Western medicine, herbal medicine has a long and uninterrupted history of continuous usage by a large proportion of the population in the developing countries [15,16]. In addition from their cultural and spiritual points herbal medicines are more acceptable in these countries. Cancer would be probably the most important genetic disease to carry out treatment with medicinal plants [16]. See fig. 1. 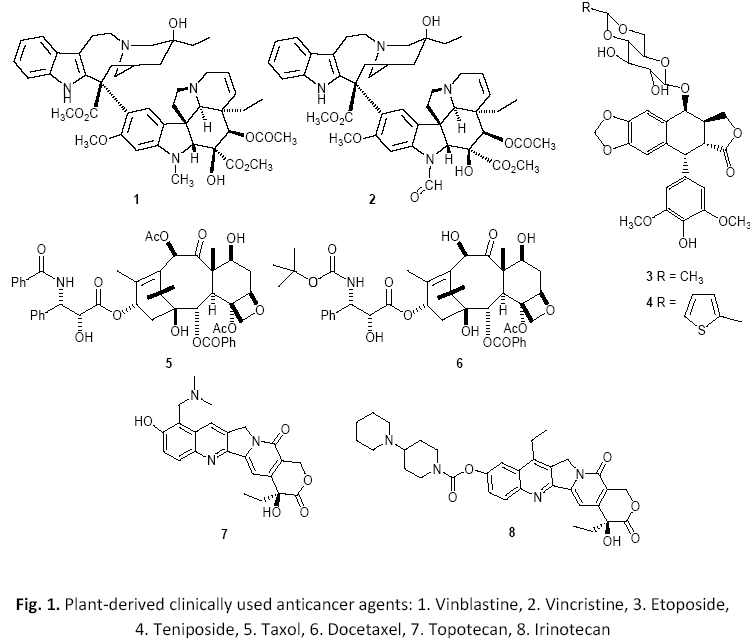 Microtubulin assembly into coiled spiral aggregrates induced by selfassociation of tubulin is under the influence and mode of action of Vincristine [17]. Etoposide is a topoisomerase II inhibitor causes DNA breaks, whereas topoisomerase I is inhibited by the action of Docetaxel [18]. Drugs made of synthetic chemistry and use of technological combinatorial chemistry in the synthesis of new leads , still today drugs derived from natural product make an enormous contribution to drug discovery. Nature is an attractive source of new therapeutic candidate compounds as a tremendous chemical diversity is found in millions of species of plants, several plantderived compounds are currently successfully employed in cancer treatment.

The annual deaths across the globe according to American cancer society accounts for more than 3 million cancer deaths, ongoing research is being done throughout the world to seek out effective treatments for cancer, Chemotheraphy which includes the high risk dosage of chemical drugs leading to high toxic cases at times. Medicinal plants relieve and treat cancer by making use of the compounds naturally present with antioxidant, anticancer activities that are known to inhibit or kill carcinogenic cells, Some plants may contain properties that naturally have the ability to prevent the spread or risk of developing various forms of cancer. Some examples of plants that may be used for cancer treatment are discussed with their respective advancements are listed in below Table No. 2.

Table 1: Some examples of secondary metabolites having anticancerous activity26

Cancer described as “granthi” and “arbuda” in Charaka and Sushruta Samhita by two great Indians and explained the disease conditions reasons responsible behind the cause of cancer [19,20]. Charaka and Sushrutha explained cancer as inflammatory or devoid of inflammation, based on the doshas involved [21]. Three doshas “Vata, Pitta and Kapha” in body are responsible for disease and the balanced coordination of these doshas in body, mind and consciousness is the definition of health in Ayurveda [22,23]. A morbid condition arises in cancer is the state where all three major body humors lose mutual coordination and it is explained as Tridoshicarbudas in Ayurveda [24]. In ayurveda the concept of Neoplasm shows various clinical symptoms. varous types of cancers were much earlier classified in to three groups in ayurveda. The three groups divided in ayurveda based on their occurance.

Group II: Inflammatory conditions that can be altered to a probable malignancies, such as ulcers and growths under certain influences like radiation, change in dietary habits, stress, smoking etc. Examples of these are growth of lips, incurable thyroid tumour, abdominal tumours like carcinomas of the stomach and liver or lymphomas.

Group III: Diseases in which there is a possibility of malignancy, such as incurable jaundice, intreatable sinusitis. [27]

Medicinal plants are rich sources of herbal properties contributing in the discovery of new drugs towards various disorders, diseases including cancer without showing no toxic affects on the individuals treated. Treatment of cancer by use of natural products and traditional medicine by applying the concepts of Ayurveda is attaining a great significance scope of cancer research. In this review author presented the importance of traditional medicine, medicinal plants in cancer treatment, anti cancer properties of natural products in brief. Medicinal plants contain good immunomodulatry and antioxidant properties which leads them to be a anticancer drug. Only few selected plants have been explored for biological activity from around 1000 species and much more, so further investigations into anticancer activity of the plants showing promising activity, must be undertaken. Vinca rosea alkaloids, Vinblastine and Vincristine, are one of the most potent anticancer drugs known. Taxol isolated from Taxus brevifolia has figured high in the therapeutic segment of cancer. From this review, it can be concluded that cancer is the leading cause of death in developing countries like India. The less expensive herbal drug treatment may highly be recommended to the rural and poor people to treat effectively the cancers of various type is an ideal choice.