Determination of Kinetics of Peroxidase Enzyme Isolated From Brassica oleracea

Copyright: © 2018 Kesavan V, et al. This is an open-access article distributed under the terms of the Creative Commons Attribution License, which permits unrestricted use, distribution, and reproduction in any medium, provided the original author and source are credited.

Peroxidases are extensively found in plants, microorganisms and animals and are resourceful biocatalysts with a wide number of applications in biomedicine as well as biotechnology. The enzyme peroxidase was isolated from the leaves of Brassica oleracea using 0.2 M phosphate buffer at pH 7.0. Different dilutions of this crude enzyme were then examined for peroxidase activity assay. The substrate 4-aminoantipyrine-phenol was used to determine peroxidase activity. The effect of enzyme concentration, substrate concentration as well as temperature and pH on enzyme activity was then determined. The kinetic constants Km and Vmax were also determined. Based on Lineweaver-Burk plot with substrate concentration in the range of 4.25 x 10-4 M to 16.15 x 10-4 M the Km was found to be 7.14 mM and Vmax was found to be 0.1 mole/min. The optimum temperature was 50°C and the optimum pH was 8.0 for the peroxidase enzyme. These optimum conditions were used to determine enzyme activities in the cabbage sample.

Peroxidases are widely distributed in nature and are found in plants, microorganisms and animals, where they catalyse the reduction of hydrogen peroxide (H2O2) to water, rendering it harmless. H2O2 is a common end product of oxidative metabolism, and being a strong oxidising agent, could prove toxic if allowed to accumulate. Peroxidase is an oxidoreductase that is directly involved in many plant functions such as hormone regulation, defence mechanisms, indol acetic degradation and lignin biosynthesis [1]. It catalyses the reaction in which hydrogen peroxide acts as the acceptor and another compound acts as the donor of hydrogen atom.

Peroxidases are versatile biocatalyst with an ever increasing number of applications [2].

Horse radish roots are used as a traditional source of peroxidase for commercial purpose. At present, horse radish is used as the major source of commercially available peroxidase, however, the researchers still investigate for new peroxidases of elevated stability and properties suitable for different biotechnological, biomedical and other application, e.g., spring cabbage peroxidase was suggested as a potential tool in biocatalysis and bio-electro catalysis [3]. Peroxidases have possibilities for applications clinically, in diagnostic kits, antibody labeling, waste water treatment and in food and paper industries.

Peroxidase can be an efficient biocatalyst for the production of industrially relevant compounds [4]. Lignin peroxidase and manganese peroxidase have significant role in lignin degradation which ultimately reduces the effort in bioethanol production from agricultural wastes [5]. As peroxidase is produced by number of microorganisms and plants, plants source is used for commercial production. Naturally thermo stable peroxidases have been described and include peroxidase from leaves of royal palm tree [6], spring cabbage peroxidase [3].

In this study peroxidase enzyme of cabbage was isolated and its activity was determined using physical and kinetic properties.

As a source of peroxidase, leaf portion of Brassica oleracea were collected from local market and carried at 4°C to the laboratory and stored at -20°C until used. Samples (2 gm) were washed with distilled water and homogenized in a blender using 10 ml of 0.2 M phosphate buffer of pH 7.0. The extract was passed through cheese cloth, centrifuged at 12000 g for 30 minutes and the supernatant was labeled as crude extract.

The extract was heated at 65°C for three minutes to inactivate any catalase present in extract [7-9]. Different dilutions of the crude enzyme were examined for peroxidase activity assay.

Total protein concentration was determined in triplicate by the method of Lowry using bovine serum albumin as a standard [10].

H2O2 rapidly reacts with 4-aminoantipyrine-phenol solution in the presence of peroxide to produce a quinoneimine chromogen which showed intense pink color with a maximum absorbance at 510 nm. Aminoantipyrine and phenol were used at concentrations of 0.0025 M and 0.17 M respectively. In this method the amount of quinoneimine formed was influenced by the amount of peroxidase present [11].

Different aliquots of the enzyme were taken into a series of test tubes. After making up the volume to 0.1 ml with phosphate buffer (0.2 M, pH 7.0) in all the tubes, 1.5 ml of H2O2 (0.0017 M) and 1.4 ml of 4-aminoantipyrine (0.0025 M) phenol (0.17 M) solution were added. After mixing the contents in each test tube thoroughly, the tubes were incubated for 4 minutes at room temperature. The change in absorbance was recorded at 510 nm in a calorimeter at one minute intervals over a period of 5 minutes. A graph was plotted with time in minutes on x-axis versus activity on y-axis [11].

Different concentrations of the substrate solution (ranging from 0.04 × 10-4 M to 0.17 × 10-4 M) were taken into a series of test tubes. Into each tube 1.25 ml of phosphate buffer (0.2 M, pH-7.0) and 1.4 ml of 4-aminoantipyrine-phenol mixture were added followed by the addition of enzyme (2.5 μg). After thorough mixing, the tubes were incubated at room temperature and the change in absorbance was recorded at an interval of 1 minute over a period of 5 minutes in a calorimeter set at 510 nm. A graph was plotted with time in minutes on xaxis versus enzyme activity on y-axis [11].

Effect of temperature on enzyme activity

10 μl of the enzyme in 0.1 ml of phosphate buffer was pipetted out into a series of test tubes. These tubes were incubated at different temperatures for a period of 10 minutes (temperature ranging from 20°C to 60°C). Following incubation the substrate solution was added to the tubes and the absorbance axis [11].

Effect of pH on enzyme activity

Determination of Km and Vmax

Kinetic studies were performed by using different concentrations of substrate solution (ranging from 4.25 × 10-4 M to 16.15 × 10-4 M) were taken into a series of test tubes. Into each of the test tube 10 μL of enzyme, varying volumes of phosphate buffer and 4-aminoantipyrine- phenol solution were added to make the final volume to 3.0 ml. After mixing thoroughly, the tubes were incubated for 5 minutes. Following incubation, the absorbance was recorded at 510 nm in a colorimeter [10]. The apparent Km and Vmax were determined from the Line weaver-Burk plot 1/V versus 1/S (Line weaver and Burk) by following the optimum pH and temperature conditions [12].

Enzymatic activity was determined at different concentrations of enzyme and substrate. H2O2 rapidly reacts with 4-aminoantipyrine-phenol solution in the presence of peroxide to give a quinoneimine chromogen which shows intense pink color with maximum absorbance at 510 nm.

The enzymatic oxidation of 4-aminoantipyrine-phenol by POD/H2O2 changed the substrate into pink compound. Enzyme at a concentration of 36 μg showed a linear increase in activity at each of the time intervals at which the enzyme activity was measured (Figure 1). 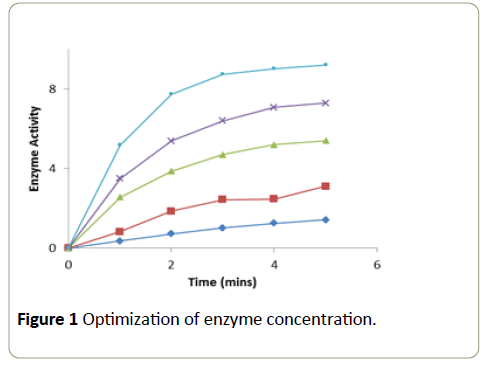 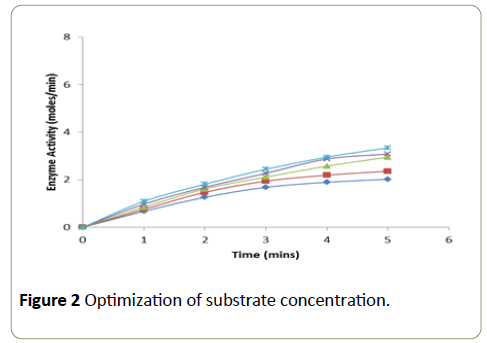 The enzymatic activity obtained at different temperatures examined is expressed as moles/min (Figure 3). The activity gradually increased up to a temperature of 50°C and then declined thereafter. Therefore the optimum temperature was found to be 50°C. 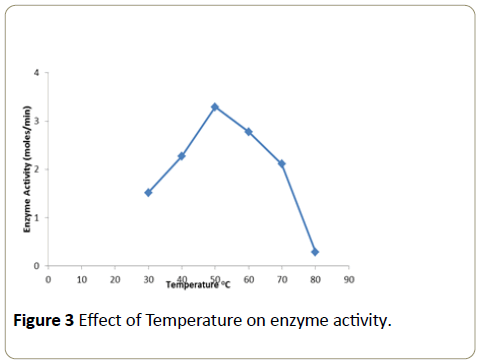 The enzymatic activity obtained at different pH tested is expressed as moles/min (Figure 4). Maximal enzyme activity was observed at pH 8. 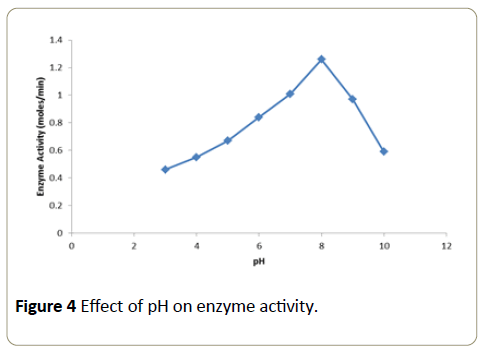 The kinetic constants Km and Vmax for the enzyme activity were determined at varying substrate concentrations. Using Line weaver-Burk plot, the Km was found to be 7.14 mM and Vmax was found to be 0.1 mole/min respectively (Figure 5). 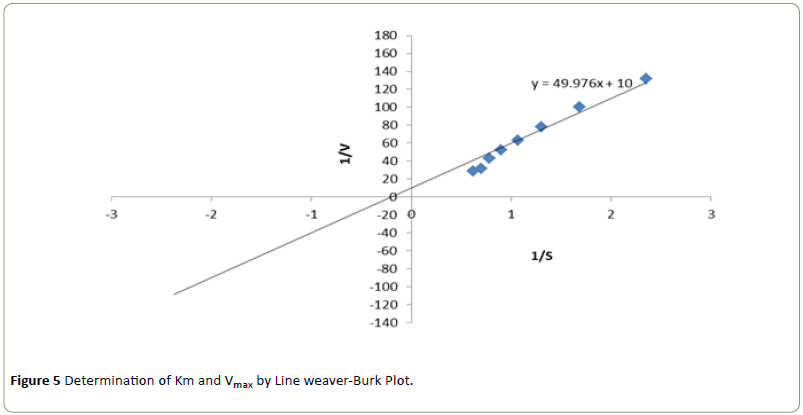 Figure 5: Determination of Km and Vmax by Line weaver-Burk Plot.

The purified peroxidase enzyme showed increased activity at an enzyme concentration of 36 x 10-2 μg and substrate concentration at 14.45 × 10-4 M. Optimum temperature was observed at 50°C and optimum pH was exhibited at 8.0. The kinetic constants Km and Vmax for the enzyme were determined using Line weaver-Burke plot and the Km was found to be 7.14 mM and Vmax was found to be 0.1 mole/min respectively. All of the above data was found to be in accordance with data reported earlier.

Brassica oleracea is a readily available vegetable which is available in all seasons at very low price and in large quantities also throughout the world. The peroxidase content of Brassica oleracea doesn’t have high peroxidase concentration as compared to HRP, but mostly have all the chemical properties which they possess. Peroxidase has many applications in the field of clinical biochemistry, immunology, biotechnology, environment and industry and is considered as one of the most valuable industrial enzyme. The procedure mentioned in this study to obtain this enzyme and to study its kinetic activity is effective and suitable for diagnostic application. 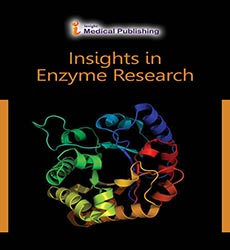