In our ongoing research to identify effective and simple compounds, we studied the cyclocondensation of 5-Chlorosatin derivatives by the action of Diamino-5- bromo-pyridine to give heterocyclic possessing Pyrido [2,3-b] Pyrazines, in a moderate to good yield. The synthesized products were characterized by 1H NMR and 13C NMR. In addition, the antibacterial properties in vitro were tested against certain microorganisms using the disk diffusion technique. The final results revealed that the majority of the compounds exhibited good antibacterial activity against Bacillus cereus and Staphylococcus aureus.

Isatin is a valuable starting material for the synthesis of a large number of fused ring systems, like the pyridine ring which can be considered as one of the simplest yet most important heteroaromatic structures, it is utilized in many pharmaceutical actives and possibly even more commonly found in agrochemical products [1,2].

In view of this we become interested in the syntheses of some new 5-Chloroisatin derivatives. We have previously reported the cyclocondensation reactions of amino group with heterocyclic carbonyl are the subject of our study because of the possibility of their use for preparation of various heterocycles [17,18]. However, only one heterocyclic carbonyl group is able to undergo to cyclocondensation, the product of this reaction can be easily predicted.

The purpose of this paper is to focus on the study of cyclo-condensation of 5-Chloroisatin derivatives with diamino-5- bromo-pyridine, to obtain new six-membered heterocyclic rings and also to investigate the possibility of using these amino ketones for the synthesis of new nitrogen-containing heterocyclic with conventional procedures.

Melting points were determined using a Buchi apparatus in glass capillary tubes or a Kofler hot-stage apparatus and are uncorrected. NMR spectra of solutions in CDCl3 (TMS as internal standard) were measured on a Bruker Avance 300 spectrometer AC 300 (1H) or 75 MHz (13C). The solvents were removed under reduced pressure using standard rotary evaporators. The purity of compounds was done by column chromatography was carried out, while thin-layer chromatography was carried out on silica gel (230-400 Mesh).

A mixture of 1 equivalent of 5-chloro-1-methylindoline-2,3-dione and 1.2 equivalent of Diamino-5-bromopyridine are added and 20 mL of xylene. The mixture is brought to reflux for 24 hours. After cooling of the reaction, the reaction mixture was concentrated under vacuum, the precipitate obtained is treated and separated by column chromatography and then recrystallized from ethanol (Scheme 1). All the prepared compounds are practically insoluble in water and only partially soluble in most organic solvents. These properties aggravated their characterization and study in solution with use of NMR spectroscopy (Scheme 2). 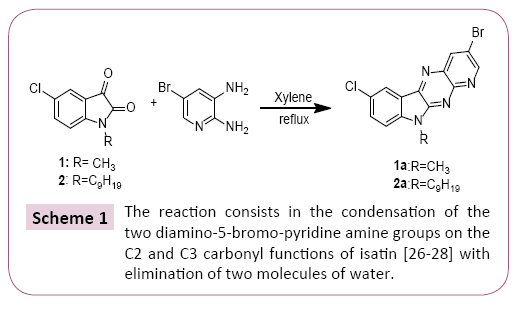 Scheme 1: The reaction consists in the condensation of the two diamino-5-bromo-pyridine amine groups on the C2 and C3 carbonyl functions of isatin [26-28] with elimination of two molecules of water. 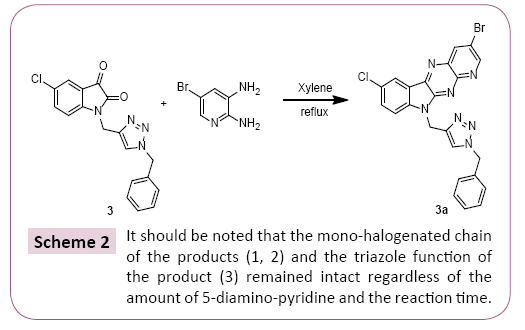 Scheme 2: It should be noted that the mono-halogenated chain of the products (1, 2) and the triazole function of the product (3) remained intact regardless of the amount of 5-diamino-pyridine and the reaction time.

Disc diffusion test: It consists of depositing a sterile disk imbibed by the test product on a bacterial mat at the very beginning of its growth and measuring the area where the bacteria could not develop. The inhibition diameter, which reflects the antibacterial activity of the product tested, is thus determined. The antibacterial activity of 5-Chloro-1H-indole-2,3-dione derivatives was evaluated using the disc diffusion method [19] using different microorganisms, including three types of bacteria: Bacillus cereus, Staphylococcus aureus, Escherichia coli and Pseudomonas aeruginosa. Mueller Hinton agar medium (MHA) was used for bacteria. Plates were preincubated at 37°C for 24h.

A sterile paper disk (6 mm in diameter) was placed on the surface of each agar plate and impregnated with 5 μL of each solution of 5-chloroisatin derivatives at a final concentration of 10 mg/ mL. Then, the Petri dishes are incubated at 37°C for 24 h for the bacteria.

Minimum inhibitory concentration determination (MIC): As a second step, we have proceeded to the determination of MICs of the products which have given positive results in the first test. The MIC was defined as the lowest concentration of compound giving complete inhibition of visible growth. All experiments were conducted in triplicates. MICs values were determined in 96 well-microplates using the micro-dilution assay according to the protocol described by Ismaili et al. [20] with some modifications.

Briefly, a stock solution of each product was prepared in 2% DMSO. Then, serial dilutions, of the antimicrobial agent were prepared in Mueller Hinton Broth (MHB) at final concentrations ranged between 5 mg/mL and 0.004 mg/mL. Then, each well is inoculated with a microbial inoculum prepared in the same medium at a final concentration of 106 CFU/mL. The 12th tube was considered as growth control, because no extracts solutions were added. Then, 50 μL of bacterial inoculum was added to each well at a final concentration of 106 CFU/mL. The final concentration of the extracts was included from 5 mg mL-1 (3rd well) to 0.019 mg mL-1 (11th well). After incubation at 37°C for 24 hours, 10 μL of rezasurin were added to each well as mycobacterial growth indicator. After further incubation at 37°C for 2 hours, the bacterial growth was revealed by reduction of blue dye resazurin to pink resorufin.

Minimum bactericidal concentrations (MBC): In order to determine the CMB, a bactericidal control is carried out 24 hours earlier by streaking on a platelet agar, after micro dilution to the broth by spreading 5 μL of the negative wells on Luria Bertani agar plates (Luria Bertani medium: Yeast extract 5.0g, peptone 10.0g, sodium chloride 5.0g, distilled water 1000 mL). The MBC will be the lowest concentration whose transplant shows a growth of germ less than or equal to 0.01% of survivors [21].

Herein, we report an efficient and economic synthesis of new products containing 6-membered heterocycles from 5-Chloroisatin. The starting material for preparation of these precedent compounds were 5-chloro-1-methylindoline-2,3- dione (1) and 5-chloro-1-nonylindoline-2,3-dione (2), which were obtained by N-alkylation reaction under phase transfer catalysis condition [22-24] and also 1-((1-benzyl-1H-1,2,3-triazol- 4-yl)methyl)-5-chloroindoline-2,3-dione (3) that was prepared by cycloaddition reaction catalyzed by Cu(I) [25].

The cyclocondensation of these compounds 3-5 was given by the action of the diamino-5-bromo-pyridine on a stoichiometric amount of the 5-chloroisatin derivatives in xylene at reflux for 12 hours resulted in a single product reclosing the pyrido [2,3- b] pyrazine structure, to give desired products in good to better yields, purity of which was declared by NMR methods.

The reaction consists in the condensation of the two diamino- 5-bromo-pyridine amine groups on the C2 and C3 carbonyl functions of isatin [26-28] with elimination of two molecules of water. It should be noted that the mono-halogenated chain of the products (1,2) and the triazole function of the product (3) remained intact regardless of the amount of 5-diamino-pyridine and the reaction time [29]. The synthesis of compounds 1a-3a is shown in Schemes 1 and 2.

Table 1 MICs and MBCs of the compounds against the microbes used.

In this paper, we have developed successfully a straightforward and an efficient single-step reaction between diamino-5-bromopyridine and 5-Chloroisatin derivatives to synthesize new products containing pyrido [2,3-b] pyrazine, with moderate to good yield under mild conditions, the structures of compounds obtained were confirmed by 1H-NMR, 13C-NMR. These derivatives were evaluated for their antibacterial activity in vitro against four bacteria including two Gram positive and two Gram negative. It is clear that the results revealed that the 2 compounds were biologically active with different spectral activity across all bacteria studied, whereas compound 3 showed no antibacterial effect. Whereas the other compounds 1 exhibited a moderate inhibitory effect. These encouraging results indicate that these organic compounds should be studied more widely in order to explore their potential in the treatment of infectious diseases as well as in the inhibition of bacterial growth.

The authors would like to thank yasir zaid who helped to carry out this work such as 1H NMR, 13C NMR in France.