2Department of Life and Environmental Sciences, University of Cagliari, via Ospedale 72, 09124, Cagliari, Italy

Copyright: © 2018 Aissani N, et al. This is an open-access article distributed under the terms of the Creative Commons Attribution License, which permits unrestricted use, distribution, and reproduction in any medium, provided the original author and source are credited.

Allelochemicals are compounds produced by plants and have a role in the growth, health, and behavior of other organisms [1]. Root-knot nematodes (Meloidogyne spp.) are among a vast array of pests continually attacking plants and causing roughly US$70 billion annually of crop losses in fruit and vegetable production [2]. Meloidogyne spp. being the most common and widespread group of Root Knot Nematodes in the world, increases the severity of soil borne diseases [2-6]. Many scientific studies have reported data on the biological activity of plant secondary metabolites on root-knot nematodes. Aldehydes from Ailanthus altissima as (E,E)-2,4- Decadienal and (E)-2-Decenal and methyl isothiocyanate from caper were active on Meloidogyne javanica [6,7]

Buckwheat (Fagopyrum esculentum Moench) is a wellestablished special crop that has been grown on Eastern prairies for the last 40 years. Seeds of common buckwheat or sweet buckwheat are usually consumed in Asia, Europe, North America, South Africa, and Australia [8]. At the present time the only attributes used to evaluate buckwheat quality are color and flavor related to volatile aldehydes [9]. Buckwheat contains high levels of nutritionally beneficial components and can be processed into various functional foods. There have been a large variety of buckwheat-based food products available in the market such as buckwheat noodles, pasta, bread, tea, spirits, and vinegar [10].

Recent researchers have found that buckwheat seed extract has a strong anti-oxidant activity [11]. Besides, immunestimulant and anti-virulent activities of seeds were noted [12,13].

In the present investigation, we report (1) for the first time the antiparasitic activity of the methanolic extract of common buckwheat aerial part on Meloidogyne incognita with and without taking into account moisture (2), the nematicidal activity of the most abundant aldehyde in the extract (salicylaldehyde) and structurally related aldehydes and finally (3) their synergistic activity.

Seeds of buckwheat were purchased from a local market in Cagliari-Italy in March 2016. Voucher specimens were deposited at the Laboratory of Functional physiology and valuation of bioresources, High Institut of Biotechnology of Beja-University of Jendouba-Tunisia, for species identification. Seeds were germinated in cotton for 2 week at a temperature of 24°C. Fresh aerial plant parts were collected and ground (100 g) and extracted with methanol (1:1 w/v) in a sonicator apparatus for 15 mints, filtered through a Whatman no. 40 filter (Thermo Fisher Scientific, Illkirch, France) and centrifuged for 15 mints at 28341 g. The extract was then used to assess the nematicidal activity. The same protocol was repeated after drying plant aerial parts at 105°C for 24 h and moisture determination.

A population of M. incognita originally reared from tomato roots (Solanum lycopersicum L.) cv. Belladonna, a cultivar that is very susceptible to root-knot nematodes, was collected from a greenhouse in Cagliari (Italy). All plants were maintained in a growth chamber at 25°C to 28°C, 60% relative humidity, and 16 h photoperiod, in plastic pots (18 cm diameter). Plants used for inoculations were 7-week-old, at the 5-leaf stage. After 40 days, the plants were uprooted, and the roots were washed free of soil and cut into 2 cm pieces. Eggs were extracted according to the sodium hypochlorite procedure, and secondstage juveniles (J2) were allowed to hatch in modified Baermann funnels at 28°C. All J2 hatching in the first 3 days were discarded, and thereafter J2 collected, after 24 h, were used in the experiments [15].

The nematicidal activity of the extract and compounds, in terms of nematode juvenile infestive stage (J2) paralysis, was tested and the EC50 values were calculated. Stock solutions were prepared by dilution with dimethyl sulfoxide (DMSO), whereas working solutions were obtained by dilution with distilled water containing the polysorbate surfactant 20 (Tween-20). Final concentrations of dimethyl sulfoxide in each well never exceeded 2% v/v, because preliminary trials showed that paralysis of nematodes exposed at those concentration levels was similar to paralysis of nematodes maintained in distilled water [1]. Distilled water, as well as a mixture of water with dimethyl sulfoxide and Tween-20 at concentrations equivalent to those in the treatment wells, served as negative control while fosthiazate at the same concentrations was used as positive control. Twenty-five juveniles were used per treatment well in Cellstar 96-well plates (Greiner Bio-one, Milan, Italy). The plates were covered to prevent evaporation and were maintained in the dark at 28°C. Border wells containing plain water with nematodes were placed around the wells of each treatment to check the vapor drift among wells that could possibly interfere with the efficacy results. Juveniles were observed with the aid of an inverted microscope (Zeiss, Oberkochen, West Germany) at 40 x after 24 h and were ranked into 2 distinct categories: motile or paralyzed. After the assessment, the nematodes were transferred into plain water, after washing in tap water through a 20 μm pore screen to remove the excess of tested compounds, and they were assessed again after 24, 48 and 72 h for the re-obtainment of motility. Dead nematodes were characterized by the presence of internal vacuoles.

The same protocol with adequate concentrations was repeated for synergistic activity assessment.

Treatments of paralysis experiments were replicated 6 times, and each experiment was performed twice. The percentages of paralyzed J2 in the microwell assays were corrected by elimination of the natural death/paralysis in the water control according to the Schneider Orelli formula, corrected [16]:

Then, they were analyzed (ANOVA) after being combined over time. Since ANOVA indicated no significant treatment by time interaction, means were averaged over experiments. Corrected percentages of paralyzed J2 treated with test compounds were subjected to nonlinear regression analysis using the log-logistic equation proposed by Seefeldt et al. [17]:

where, C=the lower limit, D=the upper limit, b=the slope at the EC50, and EC50=the test compounds concentration required for 50% paralyzed nematodes after elimination of the control (natural death/paralysis). In the regression equation, the test compounds concentration (% w/v) was the independent variable (x) and the paralyzed J2 (percentage increase over water control) was the dependent variable (y). The mean value of the 6 replicates per compound concentration and immersion period was used to calculate the EC50 value.

The 2 week aged aerial part plants moisture was calculated at 60.5% dealing with the richness of this plant on water and allowing the assessment of the nematicidal activity of the extract before and after drying the plant.

Without taking into account plant compound bioavailability or the synergetic effect, the extract was tested against M. incognita, a linear concentration-mortality relationship was established and significant paralysis/death of nematodes was evident after 48 and 72 h of exposure with an effective dose 50 (EC50) calculated value of about 62.6 ± 26 (R2=0.99) and 40.8 ± 26 μg/ml (R2=0.96), respectively (Figure 1). Nematicidal activity of the methanol extract without drying was EC50=127.7 ± 67 μg/ml and 98.3 ± 54 μg/ml after the same period of immersion respectively. 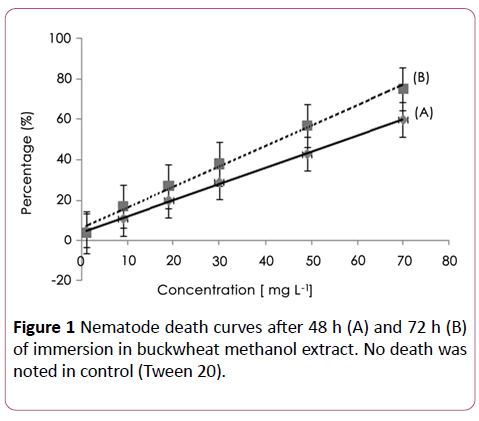 Figure 1: Nematode death curves after 48 h (A) and 72 h (B) of immersion in buckwheat methanol extract. No death was noted in control (Tween 20).

J2 paralysis of the tested compounds

The analysis of the extract volatilome by headspace technique showed that this plant is rich in aldehydes and ketones according to a previous study [11]. Figure 2 and Table 1 present chemical structure and EC50 of the most important aldehydes found in this extract against M. incognita and M. javanica [5-7,18] as well as the control fosthiazate. Salicyl aldehyde (2-hydroxy benzaldehyde) was the most active aldehyde followed by 3-hydroxy benzaldehyde (3), 4-hydroxy benzaldehyde (4), benzeneacetaldehyde (5) and then benzaldehyde (1) with an EC50 after 24 h of immersion of about 11 ± 1; 31 ± 22; 75 ± 23; 168 ± 52 and 300 ± 110 μg/ml respectively (Table 1). 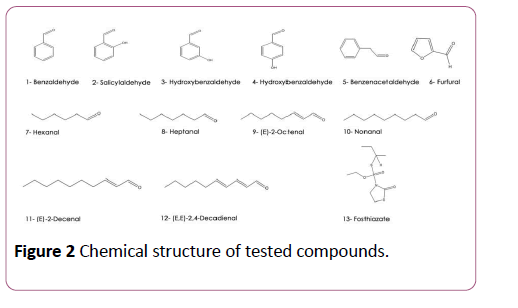 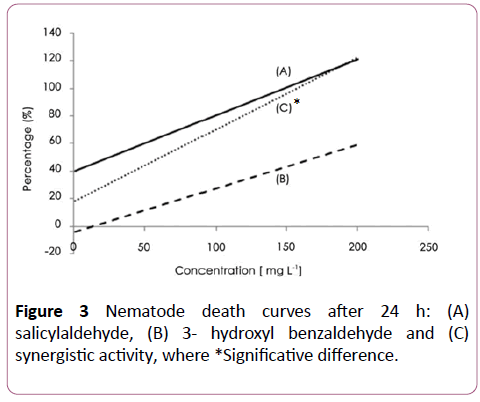 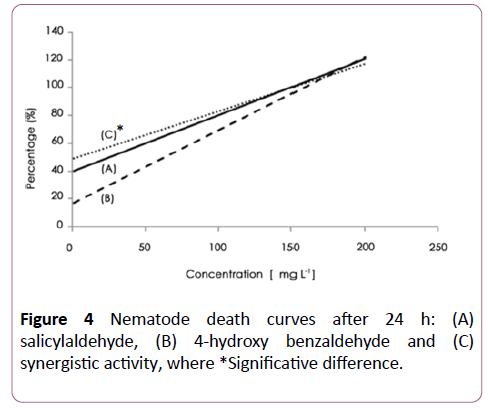 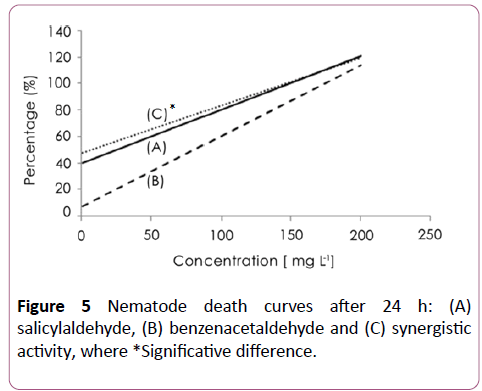 In this study, aerial fresh and dried part of Common buckwheat (Fagopyrum esculentum) was extracted using methanol and the nematicidal activity of the extracts was assessed against juveniles of Meloidogyne incognita. Results showed that the extract was more active when the plant was dried with EC50=40.8 ± 26 μg/ml after 72 h. This nematicidal activity is high considering those of Capparis spinosa stems methanol extracts with an EC50 value of 215 ± 36 μg/ml [7].

The chemical analysis of buckwheat showed that this plant is rich in polyphenols such as rutin, quercitin and tannins [19-21] which can be responsible for this nematicidal activity. In a previous study, polyphenols from Melia azedarach presented a nematicidal activity against M. incognita and the most active compound was salicylic acid with EC50 of 379 ± 96 μg/ml after 24 h of exposure [5].

Different isomers of fagopyrin, a phototoxic agent which can act as photosensitizer upon excitation with visible light causing fagopyrism, were found in buckwheat [22]. Symptomatically, fagopyrism is manifested as a skin irritation that occurs with sunlight exposure following the ingestion of large quantities of this plant [22]. The phenomenon of skin irritation was observed when nematodes were treated with aldehydes such as phthalaldehyde and cinnamic aldehyde [18]. Aldehydes from Ailanthus altissima presented a strong nematicidal activity against root knot nematodes [6,7].

In the same fashion, the analysis of buckwheat volatilome by headspace technique showed that this plant is rich in aldehydes and ketones [11]. According to Janes and Kreft [23,24], salicylaldehyde is a characteristic aroma component of buckwheat and presents the highest concentration with 1.6 μg/ml. The structure-activity study showed that salicylaldehyde (2-hydroxy benzaldehyde) is 3 times more active than 3- hydroxyl benzaldehyde and 7 times more than 4- hydroxybenzaldehyde. Thus, the position 2 of the hydroxyl group in the benzene ring seems to be very important for the nematicidal power followed by the position 3 and 4. Using aldehydes with linear chains, our results clearly indicate that α,β,γ,δ- unsaturated C10 aldehydes are generally more nematicidal than their shortest C-chain counterparts versus M.incognita confirming those found by Caboni et al. [6,7] using M. javanica.

In a recent study, (E)-2-decenal degenerated the nematode pseudocoel cells and caused malformations of somatic muscles [25]. Caboni et al. [18] showed that nematodes treated with salicylaldehyde and aromatic aldehydes presented serious cuticle damages with marked macroscopic fractures and paralysis in a straight shape with evident internal vacuolization compared to the controls [18]. This observation was noted also after immersion of nematodes in buckwheat methanolic extract (Figure 6). Previous studies reported similar results when nematodes were treated with isothiocyanates and some vacuolar-type proton-translocating adenosine triphosphatase (V-ATPase) inhibitors such as pyocyanin [1,2]. 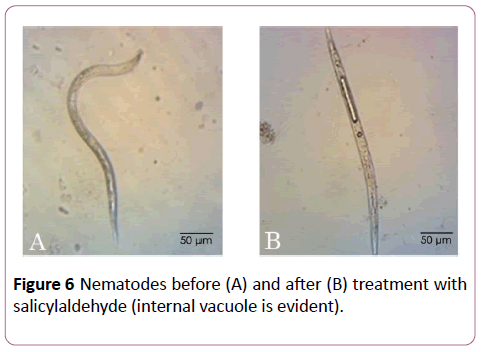 Interestingly, salicylaldehyde produced an increased pH in lysosomal-like organelles on HeLa human cell line and this alteration was most likely related to a V-ATPase impairment [15].

This study deals for the first time with the nematicidal activity of common buckwheat methanol extract against M. incognita. This plant is rich in polyphenols, fagopyrin and aldehydes such as salicylaldehyde, which has nematicidal activity against this root-knot nematode. Results are promoters and allow us to use this plant for crop protection against pests.

Special thanks to Professor Pierluigi Caboni from the University of Cagliari-Italy for providing nematodes, chemical standards and his valuable technical assistance. 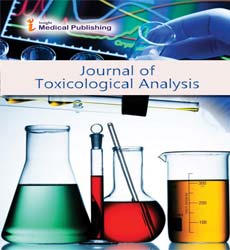