Objective: 1’-Acetoxychavicol acetate (ACA), a compound contained in the rhizome and seeds of Alpinia galanga, has various physiological effects. To identify the effect of ACA on wound closure in an in vitro model of human keratinocytes and fibroblasts, and on human skin in an ex vivo wound model.

Conclusions: ACA coordinates 1) fibroblast proliferation, 2) collagen accumulation, 3) keratinocytes migration and 4) re-epithelialization, which are important in the control of wound healing. This finding suggests that ACA has clinical applications in accelerating wound healing.

Surgical incisions and minor lacerations, diabetic, venous, and pressure ulcers are the most common wounds. Among them, many surgical incisions and lacerations are categorized as acute wounds and almost of them heal with minimal complications. On the other hand, diabetic, venous, and pressure ulcers are chronic wounds that are difficult to heal and require expensive treatments. Recently, chronic wounds, which are commonly found in patients who are bedridden or diabetic, have become a social problem. Therefore, wound healing is important for both the prevention of infections and the improvement of the patient’s quality of life. New drugs for treating chronic wounds, including intractable skin ulcers and decubitus ulcers, have been developed by many researchers. However, unwanted side effects sometimes prevent the utilization of these new drugs. As sources for the development of new drugs, natural products are very suitable because they have no side effect. Recently, some natural products such as honey [1], aloe [2], herbs [3] and caffeine [4] have been incorporated into wound treatments. Ginger extract has also been reported to be effective in treating wounds [5]. 1’-Acetoxychavicol acetate (ACA) is a compound contained in the rhizome of Alpinia galanga and Alpinia conchigera of the ginger family, but not in other ginger. Alpinia galanga and Alpinia conchigera are distributed in Southeast Asia and are mainly used in cuisine of their countries. On the other hand, we have reported that ACA has various physiological effects, including anti-cancer [6], anti-obesity [7], antioxidant [8], detoxification of xenobiotics [9] and anti-cognitive [10]. Furthermore, other researchers have reported that ACA inhibited skin tumorigenesis in K5.Stat 3C mice, which is a model of psoriasis induced by suppressing phospho-p65 NF-β activation [11]. ACA also inhibited phorbol esters-induced oxidative stress in mouse skin and inflammatory responses [12]. However, it is not clear that whether ACA is effective on wound healing. The wound healing process depends on many types of cells. The migration, proliferation, and differentiation of keratinocytes and fibroblasts are very important for re-epithelialization and wound healing. Therefore, we examined the effect of ACA on wound closure in an in vitro human keratinocytes model, the activation of human fibroblasts, and the progression of re-epithelialization on human skin ex vivo wounds.

The MTT [3(4,5-dimethylthiazol-2-yl)-2,5-diphenyltetrazoliumbromide] assay was carried out according to our previous report [13].

In vitro wound healing assay was carried out according to Torre et al [14]. The relative migration of the cells was measured using Image J software (Wayne, Rasband, National Institutes of Health).

Transwell migration assay was carried out according to Wolczyk et al. [15,16]. The cells were treated with 1 μM ACA and then incubated for 48 h. The cells that migrated to the lower surface of the membrane were fixed with methanol, stained with hematoxylin, and examined using an Olympus IX-70 microscope. Five randomly chosen fields were counted using ImageJ software.

Immunohistochemistry was carried out according to our previous report [16]. Anti-collagen I polyclonal antibody (Millipore Corporation, Temecula, CA, USA) or anti-elastin polyclonal antibody (Cosmo Bio Co., Ltd, Tokyo, Japan) was used as a primary antibody. The antibody biotinylated anti-rabbit goat was used as a secondly antibody. Then the cells were incubated with horseradish peroxidase-labelled streptavidin-biotin complex. 3,3’-Diaminobenzidine tetrahydrochloride with nickel chloride was used for peroxidase reaction. The cells were observed under an Olympus IX-70 microscope.

Preparation of human skin for assay

Ki-67 expression was used as an indicator of cell proliferation. Human skin specimens were used to generate acute wounds. Acute wounds were treated by a 4-mm biopsy punch. After culturing with or without 1, 5, or 10 μM ACA for 24 h in 6-well plates, skin fragments were put into OCT compound (Sakura FineTechnical Co, Ltd, Tokyo, Japan) and stored at -80Ã‹ÂšC.The mouse anti-human Ki-67 (Dako) or mouse anti-human CK6 antibody (Abcam) was used as a primary antibody. The antibody goat anti-mouse Alexa Flour 488 was used as a secondary antibody. Then, the slides were counterstained with 4',6-diamidino-2-phenylindole (DAPI). The slides were observed under a FS X 100 Bio Imaging Navigator. The rate of Ki-67 positive cells was measured by ImageJ software.

Skin specimen preparation for the assessment of re-epithelialization

The specimens were provided by a 23-year-old man. Skin specimen preparation for the assessment of re-epithelialization was carried out according to Meier et al. [17]. The created “punch-in-punch” skin wounds were cultured in the medium with ACA (0.1 or 1 μM) for 24 h. The skin sheets were put into in OTC compound and frozen in liquid nitrogen. The antibody mouse anti-CK6 (Abcam, Cambridge, UK) was used as a primary antibody. The antibody goat anti-mouse Alexa Flour 488 was used as a secondary antibody. Then, the slides were counterstained with DAPI. The slides were observed under a FS × 100 Bio Imaging Navigator. The length of the epithelial tongue was estmated by ImageJ software.

The effect of ACA on the cell number of HaCaT keratinocytes was examined using MTT assay. The number of HaCaT keratinocytes after culturing for 24 h was slightly but significantly reduced after treatment with 5 μM of ACA, but ACA had no toxicity at concentrations of up to 1 (Figure 1). From this result, effective concentration of ACA was decided to 1 μM.

Effect of ACA on wound closure in vitro

The effect of ACA on wound closure was examined using in vitro scratch assay and evaluated the ability of migration of HaCaT cells. ACA significantly stimulated wound closure dose-dependently (Figures 2A and 2B).

Effect of ACA on cell migration in vitro Gurtner et al. has suggested that the ability of keratinocyte proliferation is also an important factor for wound healing [18]. Therefore, we examined by scratch assay for the assessment of the effect of mitomycin C, an inhibitor of cell proliferation, in wound closure. However, mitomycin C did not affect the ACAinduced stimulation of wound closure (Figure 4). 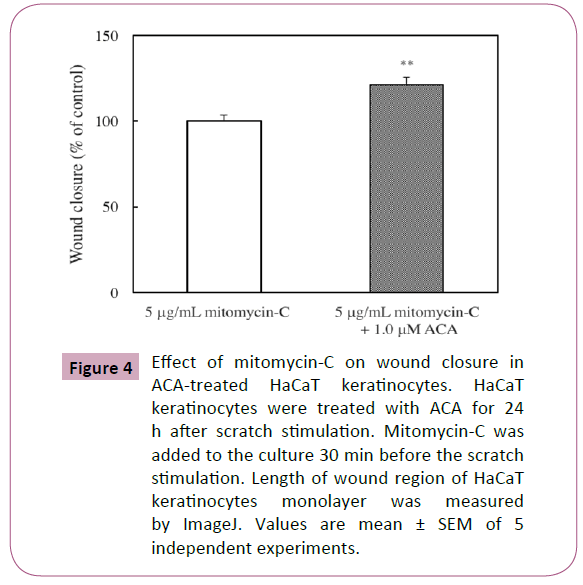 Fibroblasts play an important role in wound healing. Because they synthesize of extracellular matrix. Therefore, CCD-1059SK were incubated for 24 h with 1 M ACA. As shown in Figures 7A and 7B, treatment with ACA enhanced the collagen I and elastin expressions. 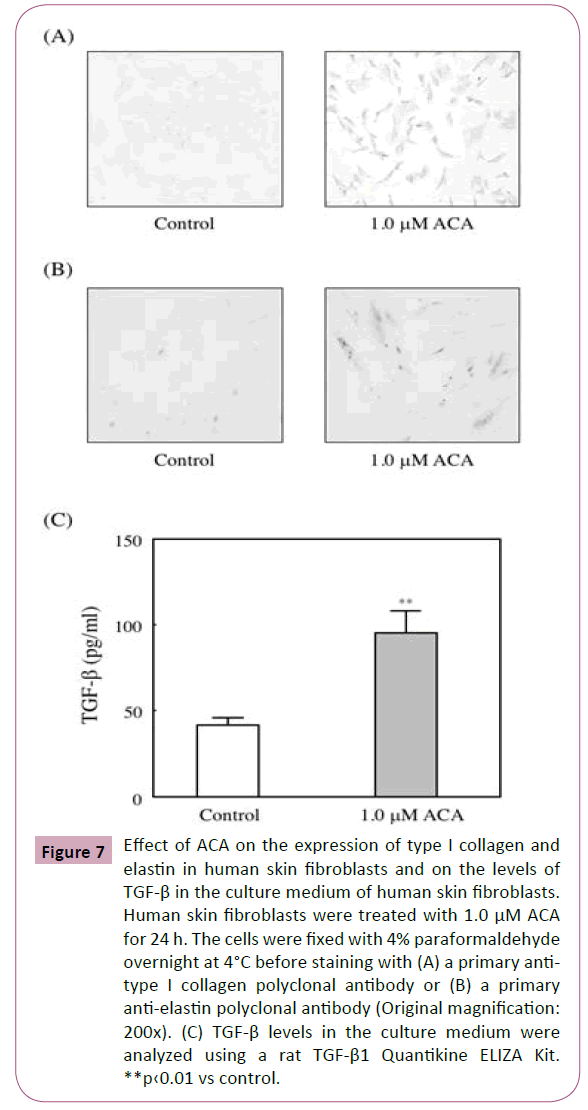 Figure 7: Effect of ACA on the expression of type I collagen and elastin in human skin fibroblasts and on the levels of TGF-β in the culture medium of human skin fibroblasts. Human skin fibroblasts were treated with 1.0 μM ACA for 24 h. The cells were fixed with 4% paraformaldehyde overnight at 4°C before staining with (A) a primary antitype I collagen polyclonal antibody or (B) a primary anti-elastin polyclonal antibody (Original magnification: 200x). (C) TGF-β levels in the culture medium were analyzed using a rat TGF-β1 Quantikine ELIZA Kit. **p‹0.01 vs control.

To further assess the effect of ACA in vitro, human skin organ was cultured with ACA for 24 h. The concentration of ACA was decided to 1, 5, or 10 μM, because it was considered that ACA might be required higher concentration in the culture medium of skin organ than that of HaCaT keratinocytes. Then, the tissues were stained immunofluorescently using Ki-67, a marker of the proliferative activity of cells. The percentage of Ki-67 positive cells in the epidermis was not affected by ACA treatment (data not shown), suggesting that ACA does not enhance cell proliferation. This result completely fits with results in in vitro HaCaT keratinocytes. Figure 8: Effect of ACA on the expression of CK6 in human skin organ culture.The skin fragments were treated various concentrations of ACA for 24 h in 6-well plates after staining with mouse anti-human CK6 as a primary antibody and goat anti-mouse Alexa Flour 488 as a secondary antibody. Then, the slides were counterstained with DAPI. (A) The specimens were observed with a FSX100 Bio Imaging Navigator. Red: CK6, blue: nucleus. (B) The immunofluorescence intensity of CK6 was measured by ImageJ. Values are mean ± SEM of 4 independent experiments. *p‹0.05, **p‹0.01 vs control.

Furthermore, the effect of ACA on the progression of reepithelialization of human skin was examined. The wound circles were treated with ACA (0, 0.1, or 1 μM) for 24 h, and the length of the epithelial tongue that formed on the wound closure was then measured. As shown in Figures 9A and 9B, the epithelial tongue was significantly increased by the ACA treatment (1.0 μM). Figure 9: Effect of ACA on the progression of re-epithelialization on human skin ex vivo wound model. (A) The wound circles were treated with ACA (0, 0.1, or 1 μM) for 24 h, and the length of the epithelial tongue was measured by ImageJ. (B) The graph indicates the mean ± SEM values of 8 independent experiments. **p‹0.01 vs control.

The authors declare they have no competing interests.