The development of chemotherapy-induced left ventricular dysfunction should be carefully monitored in patients with breast cancer who are receiving trastuzumab therapy, and also with associated valvular heart disease (VHD). Left ventricular myocardial global longitudinal systolic strain (GLSS) and left ventricular dimension monitoring can be independent subclinical predictors of the subsequent decline in left ventricular ejection fraction (LVEF). This change can be incremental to usual predictors in patients at risk for trastuzumab-induced cardiotoxicity. Our patient presented with an increase in her left ventricular internal diameter diastolic dimension (LVIDd) three months into her initiation of chemotherapy (CT), followed by a reduction in her left ventricular GLSS about ten months into her Trastuzumab based CT. LVEF and Troponin values obtained were not suggestive of cancer treatment-related cardiac dysfunction (CTRCD). Some recovery in the left ventricular GLSS and improvement in the LVIDd was observed following optimization of medical therapy. Her beta-blocker was switched from Labetalol to carvedilol, angiotensin-converting enzyme inhibitor (ACE-I) was initiated, and the doses titrated as tolerable by the patient (limited by her hypotension) along with non-pharmacological intervention.

A woman in her mid-40's with a history of hypertension, mitral valve prolapse with moderate to severe mitral regurgitation (MR), was diagnosed with infiltrating ductal carcinoma of the lower outer quadrant of right breast stage II B, metastatic to axillary lymph nodes. This tumor was ER/PR negative and HER-2 positive. The staging CT scan showed subpectoral lymph nodes in addition to axillary lymph nodes.

She was referred for a cardio-oncology consultation before initiation of her chemotherapy. Her baseline Cardio-oncology transthoracic echocardiogram (TTE) performed on Phillips Epiq-7 CV platform with an X-5 variable frequency transducer on demonstrated normal left ventricular (LV) size and ejection fraction (EF) estimated at 63% by biplane modified Simpson's method, baseline GLSS at -16.7%, and her LVIDd was normal at 4.8 cm (figure: 1). GLSS of 18% is set a standard as normal for our cardiovascular laboratory per protocol. Her TTE also revealed bi-leaflet mitral valve prolapse with a moderate to severe mitral regurgitation. (Blood pressure (BP) =112/70 mmHg and Heart rate (HR) = 73 bpm). Baseline Troponin-I was 0.01 ng/ml. Labetalol was changed to carvedilol 6.25 mg by mouth orally (PO) bid after meals. She was started on neoadjuvant TCHP chemotherapy (CT), four-drug regimen Taxotere (docetaxel), Carboplatin, Herceptin (Trastuzumab), and Perjeta (Pertuzumab) by her oncologist, with the plan to continue Trastuzumab every three weeks for a total of 18 cycles.

TTE (per cardio-oncology TTE protocol utilizing the same ultrasound system for all the subsequent transthoracic echoes) performed at a three-month interval, revealed left ventricular ejection fraction (LVEF) at 59%. Her LVIDd now increased to 5.9 cm (figure: 2). LV GLSS remained relatively unchanged at -16.5%. Her HR was 83 bpm, and BP was 129/77mmHg for this TTE. She remained euvolemic on examination. Given the increase in the LV diastolic dimension to 5.9 cm from 4.8 cm by the three months before TTE, ACE-I Lisinopril was added to her medical regimen. 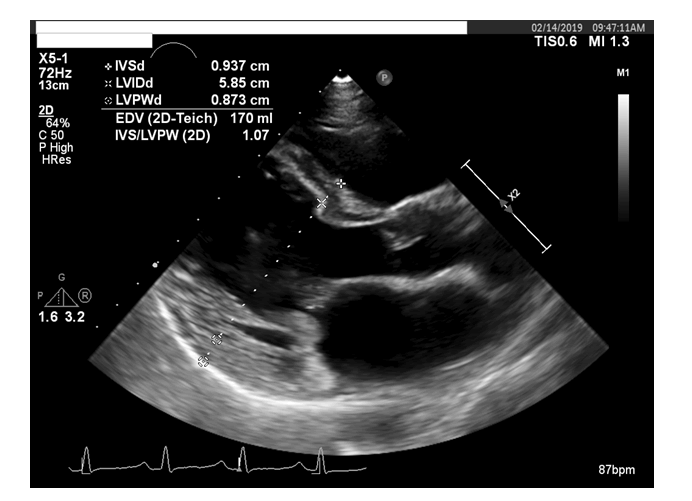 Figure 2:A transthoracic echocardiogram (TTE) obtained at a three-month interval from initiation of her CT demonstrated a normal LVEF, but an increase in end-diastolic dimension to 5.85 cm.

Her follow-up three-month cardio-oncology TTE revealed LV GLSS to have further decreased to -12% (figure: 3), EF was relatively stable at 57%, and LVIDd was unchanged at 5.5 cm. Her BP was 135/71 mmHg and HR at 69 bpm. Troponin I remained less than 0.01 ng/mL. Lisinopril dose was further titrated up, and her carvedilol was continued.

Subsequent TTE, post completion of her chemotherapy regimen, showed that her LVEF to be at 56%, and her LV GLSS improved to -14.4. (Figure: 4). Mitral regurgitation was of moderate severity, and her LVIDd was unchanged at 5.4 cm. Her BP was 116/70 mmHg and HR 63 bpm. Her Troponin I at that time remained at less than 0.01 ng/mL.

The patient has since completed 18 cycles of Trastuzumab and has had no symptoms of heart failure. She continues to receive pharmacological and non-pharmacological intervention and post-RT surveillance. 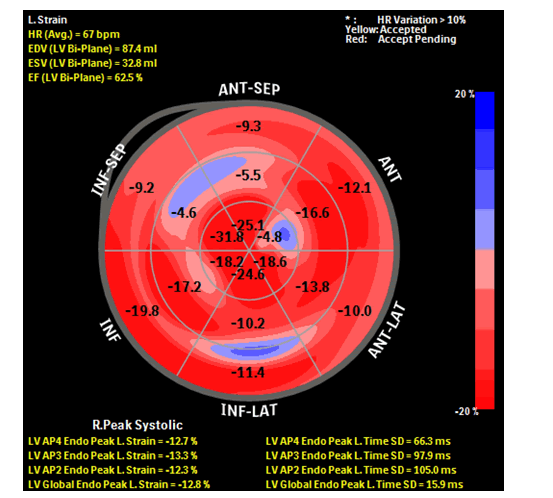 Figure 3:Bull's eye plot showing GLSS and regional longitudinal strain of the patient. GLSS -12.8%. GLSS has decreased from −16.5% from her baseline to −12.8% (22% decrease). The decrease in GLS is considered of clinical significance (>15% vs. baseline). 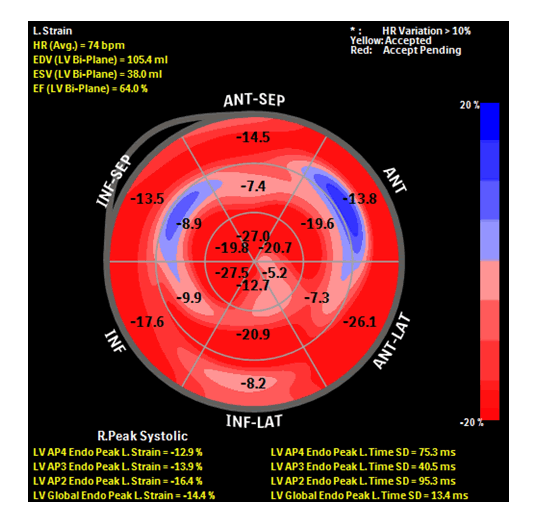 Figure 4:Bull's eye plot showing GLSS and regional longitudinal strain of the patient at the completion of her CT regimen. GLS -14.4%, an improvement from 12.8%.

A TTE demonstrated a stable LVEF (56-63% by quantitative biplane measurement) with no left ventricular regional wall motion abnormalities but an increase in LV diastolic dimension and a decrease in myocardial strain with abnormal global longitudinal strain to as low as (−12.8%). These findings were all new compared to her baseline TTE prior to treatment. She did have some improvement in her LV GLSS to -14% and LVIDd to 5.4 cm following the pharmacological intervention and ABCDE non-pharmacological intervention.

Global longitudinal systolic strain (GLSS) is the optimal measure of deformation for the early detection of sub-clinical LV dysfunction. The measurements obtained during chemotherapy should be compared with the baseline value. (1) In one study which evaluated patients undergoing chemotherapy with available baseline strain measurements, a relative reduction in the global longitudinal strain of less than 8% from baseline appeared clinically insignificant. In contrast, a reduction in the strain of greater than 15% was more likely to correlate with cardiotoxicity (2). This study concluded that deformation parameters could provide added value as compared to clinical parameters and EF alone in prognostication of subsequent reductions in EF in patients undergoing treatment with potentially cardiotoxic agents.

The OVERCOME trial (3) showed that the combination of treatment with an ACE inhibitor (Enalapril) and a beta-blocker (carvedilol) led to a significantly decreased risk of LVEF reduction in patients with diverse hematologic malignancies who were undergoing aggressive chemotherapy.

In another study, (4) treatment with candesartan prevented the early LVEF decline associated with adjuvant therapy for breast cancer. Accordingly, it seems likely that this attenuation of the early decline in ventricular function may have beneficial long-term consequences concerning the risk of developing asymptomatic or symptomatic ventricular dysfunction. In another study (5), carvedilol had no impact on the incidence of early onset of LVEF reduction. However, the use of carvedilol resulted in a significant reduction in troponin levels and diastolic dysfunction.

The Food and Drug Administration label for Trastuzumab (6) suggests obtaining baseline and on-treatment LVEF assessment as follows: Baseline LVEF measurement immediately before initiation of Trastuzumab, every three months during the CT and after completion of Trastuzumab therapy. If Trastuzumab is held for symptomatic or LVD during the treatment, a repeat LVEF measurement should be performed at four-week intervals until improvement. The label also recommends withholding Trastuzumab for a ≥ 16% absolute decrease in LVEF from pretreatment value or an LVEF value below institutional limits of normal along with a ≥ 10% absolute decrease in LVEF from pretreatment values. A cardiac evaluation should be performed in patients on Trastuzumab if they present with new symptoms, which could be attributable to heart failure. Montazeri, K et al. have adopted specific ABCDE steps, (awareness of risks of heart disease, blood pressure, cholesterol management, tobacco cessation, diet and weight management, dose of chemotherapy and radiotherapy, Diabetes preventive measures, exercise and echocardiogram) (7) that effectively prevent heart disease in breast cancer survivors. Our patient was receiving chemotherapy and had an additional risk factor of moderate to severe mitral regurgitation. Thus, guideline-directed pharmacological therapy in the highest dose tolerated and specific ABCDE steps except for aspirin that effectively prevent heart disease in breast cancer survivors therapy were administered to this patient even during the CT.Our patient is a non smoker.

Her LVEF remained stable, and there was no rise in her troponin value throughout the treatment period. Some recovery in LV myocardial strain and improvement in the LVIDd was observed following changing her beta-blocker from Labetalol to carvedilol, initiating and up titrating her ACE-I, and non-pharmacological intervention. In another study (8), about 20-30% of the patients with chemotherapy-induced LVD did not show LV function recovery, even though LV function was recovered in 60-70% of the patients with chemotherapy-induced LVD. Trastuzumab-induced cardiotoxicity, described as type 2 cardiotoxicity, generally is connected with dysfunction of the cardiac muscle cell, rather than cell death. It is usually reversible by the discontinuation of chemotherapeutic agents and medical therapy for heart failure. Non-recovery of LV function in one retrospective study (8) was possibly due to the mixture of type 1 and 2 cardiotoxicities in the setting of risk factors.

Our patient demonstrated an increase in her LVIDd three months into her initiation of CT. This was followed by a reduction in her LGSS about ten months after initiation of her Trastuzumab - based chemotherapy. LVEF and Troponin values obtained were not suggestive of cancer treatment-related cardiac dysfunction (CTRCD). There was no measurement or physiologic variability during the entire duration of the case management to account for any changes in the cavity size since the same Philips system was utilized to perform all the TTE measurements. We currently lack diagnostic findings to include LVIDd specific recommendations for trastuzumab-associated cardiotoxicity. One study (9) is investigating whether a strain-guided strategy could prevent subsequent cardiac dysfunction compared with current EF-guided management in patients receiving cardio toxic cancer therapy. Management of CTRCD using advanced imaging techniques, such as GLSS, could be an attractive option in the future. Further studies evaluating serial LVIDd measurements may guide monitoring cancer patients receiving trastuzumab therapy, particularly in those patients with associated valvular heart disease or other cardiac comorbidities. This may aid us in understanding the mechanism by which Trastuzumab induces cardiomyopathy and guide in terms of which patients with valvular heart disease may need closer monitoring with Trastuzumab based CT. Until more data is available, clinicians should be proactive in documenting baseline LVIDd and vigilantly monitoring subsequent measurements to detect adverse reactions early, even in asymptomatic patients, and to avoid severe cardiotoxicity from an otherwise well-tolerated and highly effective therapy. Increased awareness and vigilant monitoring can lead to earlier diagnosis of trastuzumab-related cardiotoxicity, resulting in reduced morbidity and mortality.