Some Edible Spices of Southeastern Nigeria with Antiparasitic Properties: A Review

Records of information on the use of animal and plant parts to produce medicines are traceable to countries like China, India and Egypt. This indigenous knowledge was discovered through series of trials and then scientifically proved to be effective when compared to modern day medicines. Herbal remedies have thus become popular and therefore used in primary health acre deliveries of most countries. Fulani herdsmen of Nigeria and other peasant farmers also use herbs to treat their animals when they are sick and to prevent parasitic diseases. Variable successes have been reported on the use of orthodox medicaments for the treatment of internal and external parasites. However, their toxic effects on humans and livestock, the development of resistance to them by target parasites, as well as high cost of drugs, have led to the use of herbal remedies as reasonable alternatives. Herbal therapies are natural products, environmentally friendly and cheap. These short comings have thus, necessitated this study, which aims primarily to review the uses of Piper guineense, Ocimum gratissimum and Gongronema latifolium as alternatives to conventional antiparasitics.

Piper guineense is a gnarled vine native to West Africa, which is used as a substitute for black pepper. Their leaves are heart – shaped, oval, petiolate, and alternate and 12 cm long. It is a perennial plant. The inflorescence is a pedicelled flower spike between 3cm and 6cm long. The peduncle and flowers are greenish yellow and arranged in spirally along the spine [1].

Ocimum gratissimum is a herbaceous plant which belongs to the Labitae family. The plant is indigenous to tropical areas especially India and also West Africa. In Nigeria, it is found in the Savannah and coarse areas. It is commonly grown in Ceylon, South Sea Islands, Nepal, Bengal, Chittagong and Decan [2]. It is known by various names in different parts of the world. In Nigeria for instance, the plant is called Effinrin-nla by the Yorubas, Ahuji or Nchuanwu by the Ibos and Diadoya in Hausa [3].

In other climes, this plant has extensively been employed in the traditional medicine. In some parts of Brazil, it is used both as medicine and for culinary purposes. The flowers and leaves of this plant are rich in essential oils, so it is used in preparation of teas and infusion [4].

In the southern parts of Nigeria, O. gratissimum is used in the treatment of epilepsy, febrile conditions and diarrhoea [3]. In the northern part of the country, decoctions of the leaves of O. gratissimum have been used to treat mental illness [5]. The Ibos of southeastern Nigeria use Ocimum gratissimum in sterilizing wound surfaces of their babies cord. It is also used in treatment of fungal infections, fever, cold and catarrhs6. The other minor tribes of Nigeria use the leaf extract for diarrheic cases and relief of stomach upset and hemorrhoids.

Gongronema latifolium (Asclepiadaceae) bush buck, an edible rainforest plant, native to South Eastern part of Nigeria, has been widely used in folk medicine as spices and as vegetable in making soup [7]. It is also used in maintaining blood glucose levels. Reports have revealed the antioxidant effect of extracts of Gongronema latifolium leaves [8]. It has equally been reported to enhance haemoglobin formation [9] and its blood pressure lowering properties [10] was attributed to the high magnesium content. The leaf extract also exhibits antibacterial activity [11], an anti-ulcer, and analgesic, with antipyretic properties [12]. The medicinal potentials of Ocimum gratissimum, Piper guineense and Gongronema latifolium, have been documented, thus, this work is an attempt to review these, including their anti-parasitic effects.

Origin and distribution of Ocimum gratissimum

Vegetables are good sources of carotenoids, vitamins, folate, phytochemical, dietary fibres and some minerals, but low in proteins, digestible carbohydrates and lipids [13]. They are very easy to cultivate and are used in combating vitamin and mineral deficiencies in low income countries. Ocimum gratissimum is cultivated and could also be found in the wild in the tropics and subtropics.

It is very viable in India and tropical Africa, from where it probably originated [14]. The leaves of the plant are used as both seasoning and vegetable. It has great medicinal values [15,16] but little is known about its nutritional and antimicrobial activities.

The plant is grown for its’ essential oil in the leaves and stems. The phytochemicals, Eugenol and thymol extracted are used in place of clove oil and thyme oil [18]. Both the plant and its’ essential oil have beneficial applications in herbal medicine, especially in Africa and India. Mixtures from the plant are used as stomachic, treatment of sunstroke, headache, convulsion and influenza [18].

The leaves are used as laxative and are prescribed against gonorrhea. It has also been proved to have antibiotic properties. The essential oil is also an important insect repellant. Tea is also made from the leaves, whole in Thailand; the leaves are applied as flavoring [18].

The plant has an anti-convulsant quality which can be utilized for treating convulsive disorders. Traditionally, the herb is used to treat diarrhoea [19]. It has an antimalaria component that is used in treating diseases [20]. Concoctions are produced from this plant and used for treating skin infections, bronchitis and conjunctivitis [21]. It is also used in dressing wounds and as such acts as an antiseptic agent. The leaves are sometimes grinded and used as remedies for cough, while the roots act as sedatives for children [22].

Origin and distribution of Gongronema latifolium

Gongronema latifolium belongs to the family Asclepiadaceae. It is reported to have originated from Nigeria. G. latifolium is a rainforest plant, used locally in the South eastern part of the country for the management of ailments like diabetes, high blood pressure [12]. It is widely spread in tropical Africa and occurs from Senegal to Chad and to Democratic Republic of Congo [23].

Gongronema latifolium is a herbaceous, non-woody plant from the family of Asclepiadaceae. It produces milky or clear latex, widespread in the tropical and subtropical regions especially in Africa and America, with an average abundance in Northern and South eastern Asia [24].

G. latifolium is widely used in West Africa for ethno medicinal and nutritional purposes. An infusion of the upper parts can be used to treat cough, helminthiasis, dysentery, dyspepsia and malaria. It is also taken as a tonic to treat loss of appetite.

In Sierra Leone, the crushed stem, when mixed with lime juice is used to treat colic and stomach ache. In Senegal and Ghana, the leaves are rubbed on the joints of toddlers to help them walk, while the fruits are boiled in soup and taken as laxative.

In Nigeria, an infusion of the leafy stem is taken to treat diabetes and high blood pressure. It is called Utazi by the Ibo tribe of southeastern Nigeria, while the Yorubas call it Arokeke [24].

They taste sharp-bitter - sweet and widely used as vegetable for sauces, soups and salads [23].

G. latifolium is also reported to have anti-oxidant [25] and anti-asthmatic potentials [26].

G. latifolium has anti-plasmodial activity, as demonstrated by the local use of the leaf extracts of the plant for the treatment of malaria [12]. The leaves, when evaluated were found to possess anti-ulcer, analgesic and antipyretic properties, as well as anti inflammation, antibacterial, antimalarial and antidiabetic [12].

Origin and distribution of piper guineense

P. guineense is commonly found in the tropical regions of Central and Western Africa. It is cultivated in countries such as Nigeria where the leaves, known as “Uziza” in Igbo language are used as flavorings for stew and local delicacies. Like other members of the pepper family, “Uziza” or “Ashanti pepper” contains 5-8% of the chemical in sufficient proportion (10%) of myristicin, etemicin, safrole and dillapoil28. In terms of flavor, this plant is very similar to cubeb pepper, but is much less bitter and has a fresher, more herbaceous flavour.

P. guineense is an African plant, of which two parts are used; the leaves and the berries. The leaves, which have peppery taste, are pale green in colour when fresh and darker green when frozen, dried or ground and dried. The leaves are used in soup making [29], either as whole or ground forms.

It is very common, though little is known about its use in the treatment and prevention of sickness, allergy and running nose. The leaves have been reported to keep the body warm and prevent cold [28].

The different parts of this plant had been characterized and their chemical compositions determined. Some of these are not only used for food, but as therapeutic agents in minor ailments [28]. Constituents of Piper guineense (Uziza, Ashanti pepper or West African black pepper) is a herbaceous climber commonly found in the African tropical forest zones.

Some degree of nutritive value was early associated with the plant in Nigeria [26]. Phytochemical tests revealed the presence of alkaloids, tannins, Saponins, flavonoids, terpenoids and sugar in G. latifolium, P. guineense and O. gratissimum.

The ethanolic extract of the leaves of these plants have been reported to possess anthelmintic properties [30]. For instance, G. latifolium was observed to be more effective at 75% graded concentration in 1 hour, while P. guineense and O. gratissimum brought to death of helminth parasites at 3 hours.

The efficacies of conventional medicaments against internal and external parasites have been reported with variable success. Ethno medicines or plant extracts have become indispensable and are forming an integral part of the primary health care system of many nations, in treating man and his animals.

Thus, livestock production will be incomplete if cheap, less hazardous, environmental friendly, irresistible and effective anti parasitic agents are not considered or are neglected. Ocimum gratissimum, Gongronema latifolium and Piper guineense have great medicinal properties, in crude or processed forms. It is therefore recommended that drug manufacturers should harness the medicinal potentials in these plant spices and make their products available to livestock farmers. Meanwhile, farmers could take advantage of the beneficial properties of these plants in treating their animals, when they are sick.

Pictures of edible spices of southeastern Nigeria and their local names 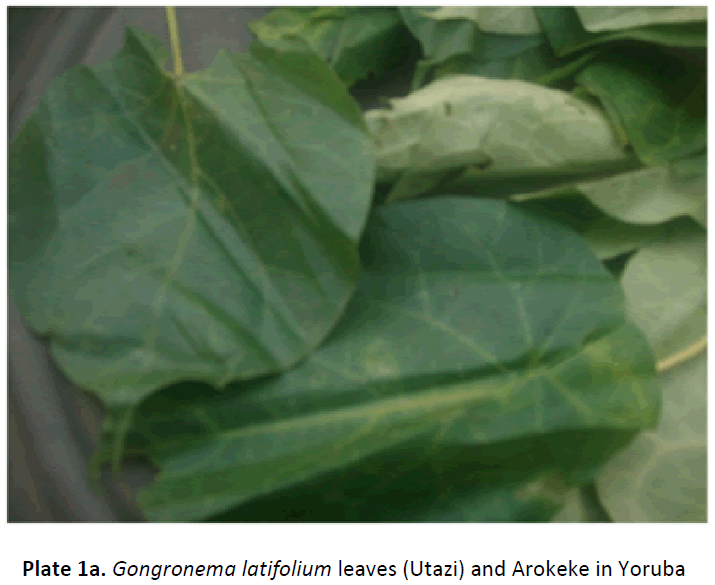 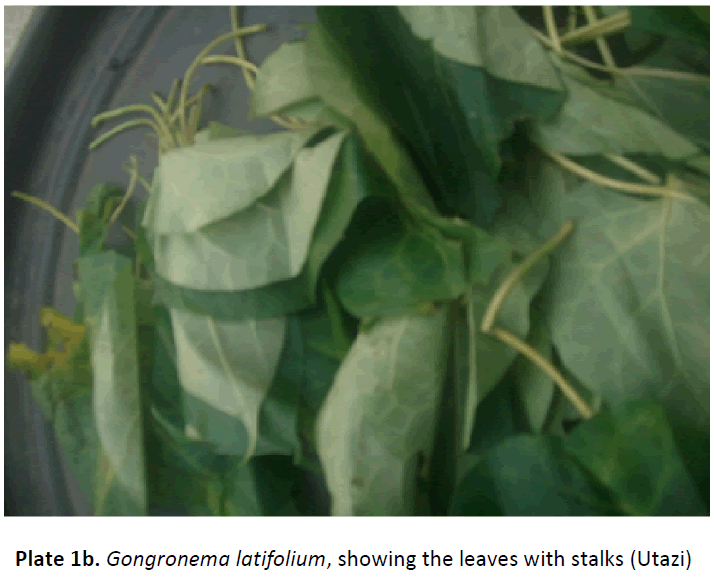 Plate 1b: Gongronema latifolium, showing the leaves with stalks (Utazi) 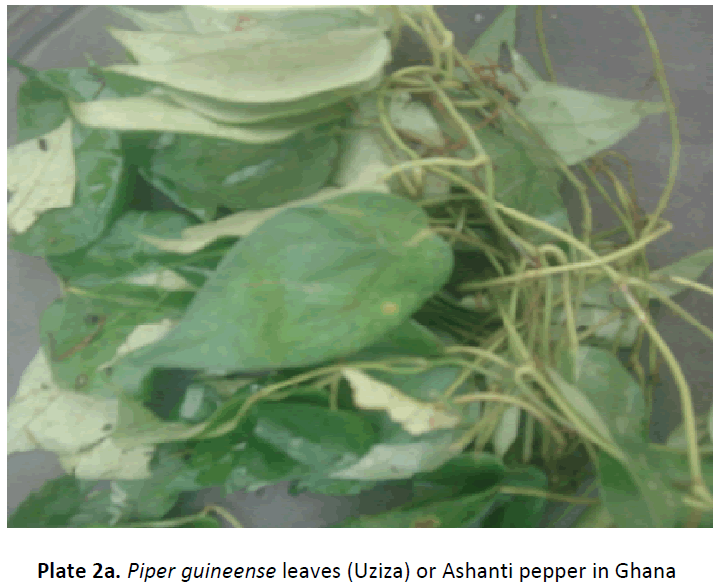 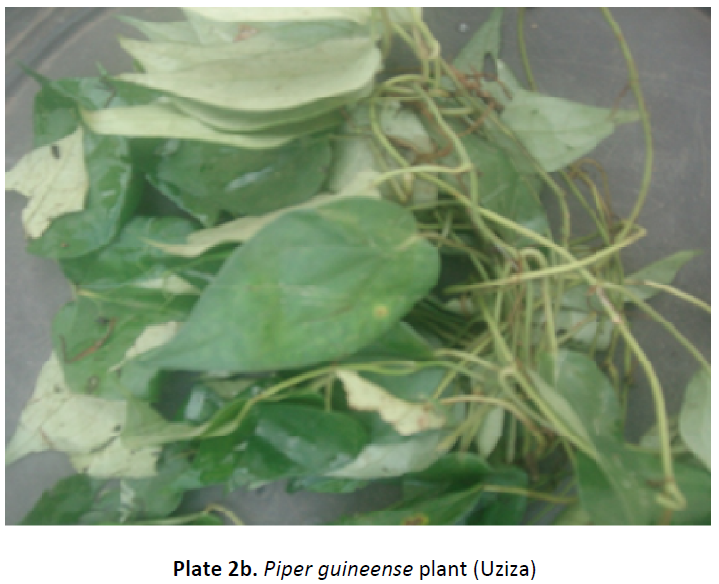 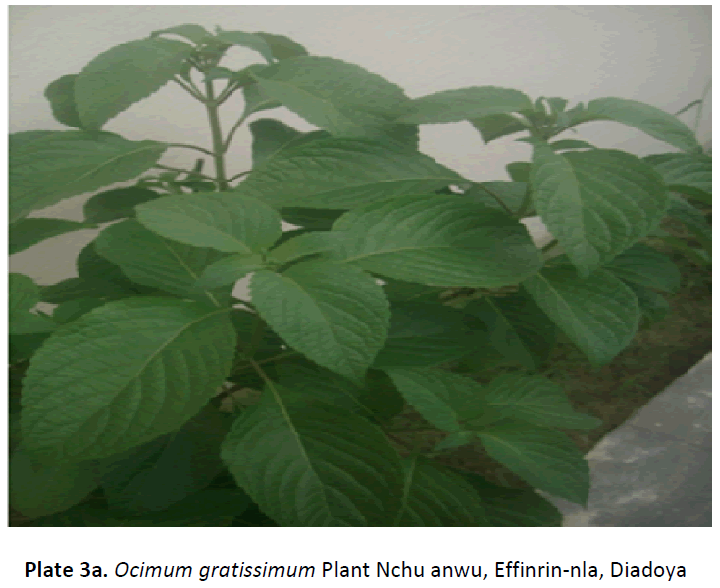 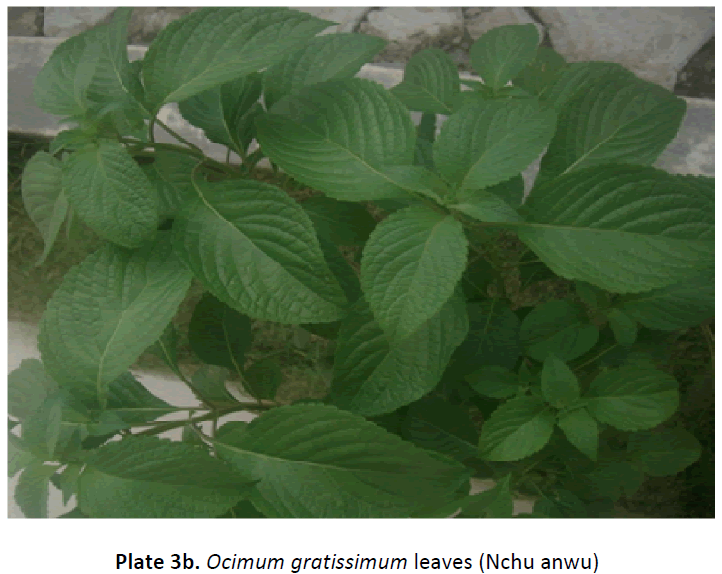