Rajasthan is one of the largest states located in the North-western part of India. The southern part of Rajasthan state comprises of a large population of tribal communities belonging to various ethnic groups. The tribal community believe that some Gods and deities can be welcomed by some special plants or their parts. So they conserve some plant species due to the traditional ritual ceremonies. These forest dwellers live in forests and possess a vast knowledge on various aspects of plants. An extensive survey of a few tehsils of Banswara was documented to the traditional knowledge of plants used by tribal communities. Tribals like Ninama, Nanoma, Damor, Garasia, Bhagora, Charpota, Singada and Katara are residing in the area. These people have strong traditions, cultural activities, beliefs, taboos, totems, performing religious rituals and valuable information about properties and medicinal uses of plants. Different parts of plant (roots, stem, leaves, bark, fruits, seeds, bulb, etc.) or the whole plant/herb is used for the said purpose of rituals and ceremonies. In this study deals with the documents of 36 plant species used by the rural people of South Rajasthan in ritual ceremonies are reported. Out of 36 plants studied, 31 species belonging to dicotyledons and 05 to monocotyledons, under 32 genera being used traditionally by the tribals.

The significant tradition of nature conservation is to dedicating patches of forests or groves to some deities and spirits by tribal and rural peoples or sometimes conservation of the rituals. The indigenous people are illiterate but have scrupulously nurtured their traditional customs, folklores, ceremonies and a way of forest life through folk beliefs. Since the Vedic times, the human race has used various plants for ritual purposes. The tribals of South Rajasthan believe that certain plants have good omen characters and some others are ominous. As such, the good omen plants are scared, used in worship and offered to God. They also use them in their social ceremonies to keep themselves fit and prosperous. Very little work has been done on such plants in district Banswara of South Rajasthan. However, ethno-botanical and ethno-medicinal aspects have drawn the attention of several workers in South Rajasthan [2-14]. The Banswara is well known for its scenic beauty, high tribal density, fascinating culture and tradition based on intricate relationship with the nature. These tribes move around the forest for their day-to-day requirements, cultural activities, beliefs, taboos, totems and performing religious rituals. With this realisation, the recent upsurge of interests in studying rituals or medicinal plants.

A significant contribution has been made by several workers on the ethnobiology from various part of world viz. Meghalaya [15], Arunachal Pradesh [16], Bahrain [17], Nepal [18], Biligiri Rangan Hills [19, 20] including India [21]. In Rajasthan Ethnobotanical studies have been carried out by several scientists from different parts of the state namely Alwar [22], Mt Abu [23], Udaipur [24, 25], Eastern Rajasthan [26], Aravalli hills of Rajasthan [27] and Hadoti Plateau SE Rajasthan [28]. 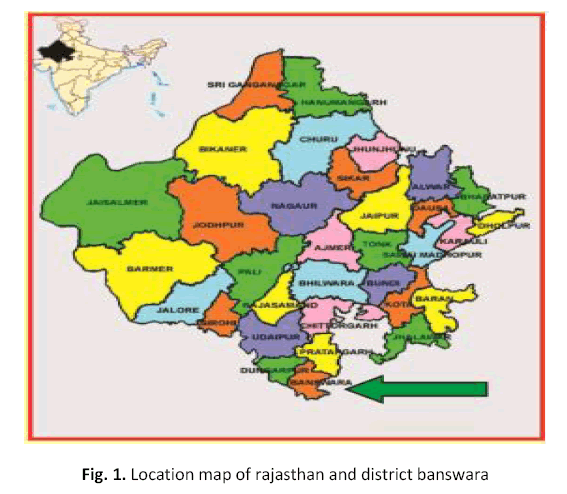 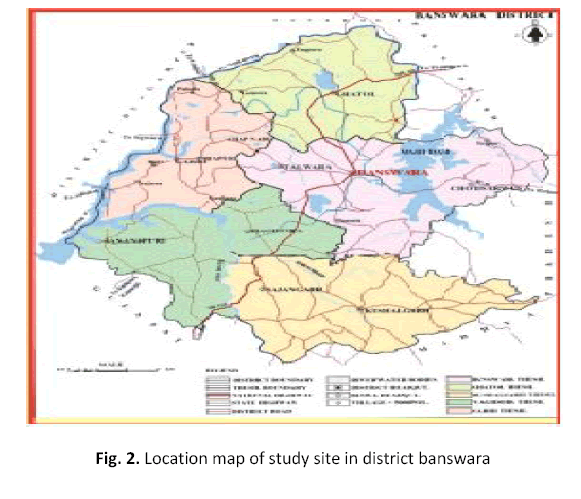 The region represents a rugged terrain undulated by short ridges at west. The eastern part of the district is occupied by flat-topped hills of the Deccan trap. The district has the southern end of the Aravali Mountains, the drainage system belongs to the Mahi river and its main tributaries are Anas, Chap, Erav, Hiran and Kagdi. Banswara has plenty of rainfall and on the whole has a salubrious climate. Banswara has high varied physiographic from plateau lands to hilly tracts. Due to heavy rainfall (averaging around 1000 mm per annum) with plenty of humidity, it becomes one of the richest spot for the growth of varied vegetation includes variety of trees, shrubs, herbs, climbers and grasses. The subtropical evergreen forest of Banswara consists of mixed tree growth with Tectona grandis L. f. nom cons. as a predominant species followed by Anogeissus latifolia (Rxb. ex DC.) Wall. Ex Guill & Perr., Diospyros melanoxylon L. Roxb., Madhuca indica J.F. Gmelin, Dendrocalamus strictus (Roxb.) Nees.and Ficus religiosa L. in this region.

On account of the district’s unique location character, an overwhelming majority of tribals, the forest-fringe villages not only depend on the surrounding medicinal plants for home remedies but also protect these plants through village sacred groves and uses in rituals.

The proposed study was based on personal interviews of various groups like village headman, spiritual leader, priest; teachers etc. of tehsil Ghatol, Bagidora, Kushalgarh, Garhi, Anandpuri and Aspur (District Banswara and Dungarpur) who could give correct information and mode of uses. The field tours for study were made at regular intervals in years 2011–2013 in order to cover the tribal areas in different seasons to collect the maximum information at the time of marriage ceremonies, local fairs at Ghotia Amba, VEneneshwar and Local HAATS. The data obtained in local language (Baagri) collected through questionnaire from different localities and villages was compared and cross linked so as to ascertain their validity and integrity. During the study, daily activities were closely observed and interpersonal contacts on different rituals ceremonies were established by participating in several social and religious ceremonies. The collected specimens were identified taxonomically with the help of Flora of India [20], Flora of Indian Desert [23], Flora of North East Rajasthan [30], Flora of Upper Gangetic Plain and the Adjacent Siwalic and Sub Himalaya Tract [31]. The verification and authentification of collected data were made in the light of standard literature [32, 33]. In the course investigation two years, the three sacred groves were surveyed. Identification of plants was done on the basis of for local uses, a cross discussion of tribals were interviewed and cross interviewed for final conclusion of study.

In the present study of district Banswara (Rajasthan) documented of 36 plant species used by the rural people in ritual ceremonies are reported. Out of 36 plants studied, 31 species belonging to dicotyledons and 05 to monocotyledons, under 32 genera being used traditionally by the tribals (Table 1). To prevent the damaging habitat fast regenerative capacity is needed. So there a great need to in dulge in the doctrine of development through conservation which will lead to development without causing any harm to the resources thus leading to conservation [35]. Many plants species are utilised by Tribals in different Traditional Magico-religious. Plants ways but this does not affect their conservational aspects [12,13,35-37]. Like all other indigenous tribal communities, tribes of Banswara Ninama, Damor, Garasia, Bhagora, Katarahavea close association with nature and have developed an indigenous knowledge of environmental protection as well as biodiversity conservation. Various cultural and religious rites and rituals are also performed except for medicinal purpose; none of the plant species is harmed in any way [38, 39]. It was observed in this study that different parts of plant (roots, stem, leaves, bark, fruits, seeds, bulb, or their extracts or by-products etc.) or the whole plant is used as various cultural, religious rites and rituals purpose.

It was also reported that these plants or plant parts used in various cultural and religious rites and rituals are of medicinal uses also and tribals try to live in contacts of these plants for their better health as well the spiritual promotions. The use of such plants in ethnomedicine was reported previously [40, 41]. The conservation and protection of medicinal plants against over exploitation by domestic and foreign commercial interest without benefits accruing to the nation are clearly our priorities [42]. The uses of such plants in various cultural and religious rites and rituals are a mode of conservation of natural wealth of earth. As we are trying to conserve by different ways as in situ, botanical gardens, germplasm banks etc [43-46]. The present note is prescribed here to focus on good omen plants.

Various religious beliefs and myths are attributed to conserve the biodiversity of the region. Tribal communities of Banswara have a cultural ecological heritage in the form of this in-situ conservation practice, the knowledge of which needs to be preserved and appreciated. Their presence in agricultural lands; grazing, fragmentation of the grove-owning families and erosion of cultural and religious beliefs and taboos are the major reasons. Therefore, there is an urgent need not only to protect rare, endangered and medicinal plants, but also to revive and reinvent such traditional practice of nature conservation and environmental management.