Frontonasal Dysplasia: A Rare Case Report and Review of Literature

Copyright: © 2018 Kalkur C, et al. This is an open-access article distributed under the terms of the Creative Commons Attribution License, which permits unrestricted use, distribution, and reproduction in any medium, provided the original author and source are credited.

• Gorlin et al. suggested that maxillonasal dysplasia is a nonspecific abnormality of the nasomaxillary complex [3,4].

• During pregnancy exposure to exogenous factors like, vitamin K deficiency and vitamin K antagonist drugs (warfarin, acenocoumarin), anticonvulsive drugs, retinoic acid or birth trauma, leading to a disturbance of the prosencephalic induction center during embryonic growth. The process of nose formation takes place during the third month of pregnancy [5-7].

• According to Holmstrom et al. inhibition of the ossification center at the lateral and inferior border of the pyriform fossa is responsible for the growth retardation and that leads to Binder syndrome [8,9].

• Olow-Norderam reported the positive family history in 36% of his patients inherited in an autosomal recessive manner [4].

• Noguchi et al. investigated the correlation between transthyretin gene mutation and facial growth retardation in an animal studies. The mutation leads to delayed transthyretin production that causes massive cell death in the nasal placode leading to hypoplasia of the frontonasal region. Transthyretin is a transport protein that carries the throxine and retinol binding protein bound to retinol. Excess amount of retinol and its deprivation may lead to abnormal fetal development [5].

A 15-year old male patient reported with a chief complaint of malaligned teeth and poor esthetics. The patient’s parents had consanguineous marriage and patient’s sister had undergone cleft palate surgery. There was no relevant history of pre-natal, natal disorders or long term maternal drug intake.

On extra oral examination, facial asymmetry was detected. Concave profile was seen due to midface deficiency. Flattening of right and left cheek was noticed. Hypoplastic was noticed in the alar basal region. Premaxilla was hypoplastic with flattening of maxillary base. Nose was hypoplastic, with flattened alae and the columella was short. Nasal bridge was flattened Fronto nasal angle was absent. Sense of smell was normal. Hypertelorism was noticed. Philtral crests were poorly developed; bow shaped and rose vertically without convergence (Figure 1). 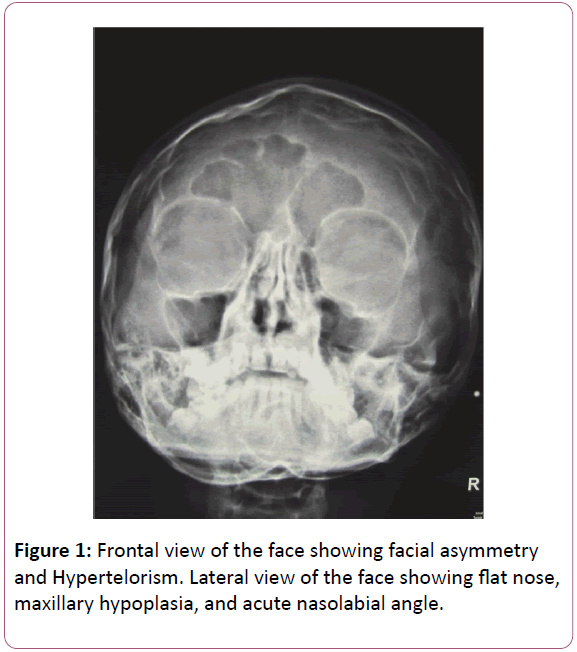 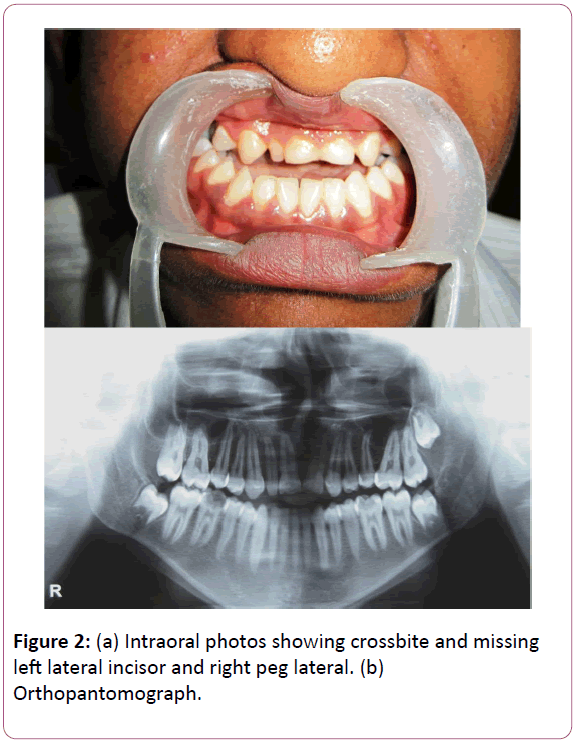 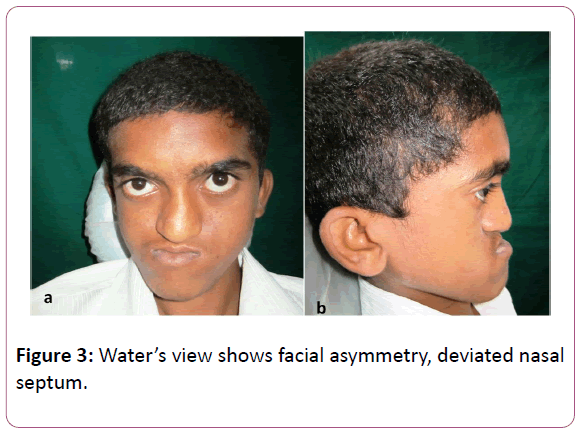 The nasolabial angle, measured between the tip of the nose and upper lip, is acute (65°). There is reduced sella nasion distance (35 mm) Decreased anterior cranial base measurements, smaller maxilla vertically and antero-posteriorly were also noticed (Figure 4). Based on clinical and radiographic features, a diagnosis of Binder’s syndrome was arrived. 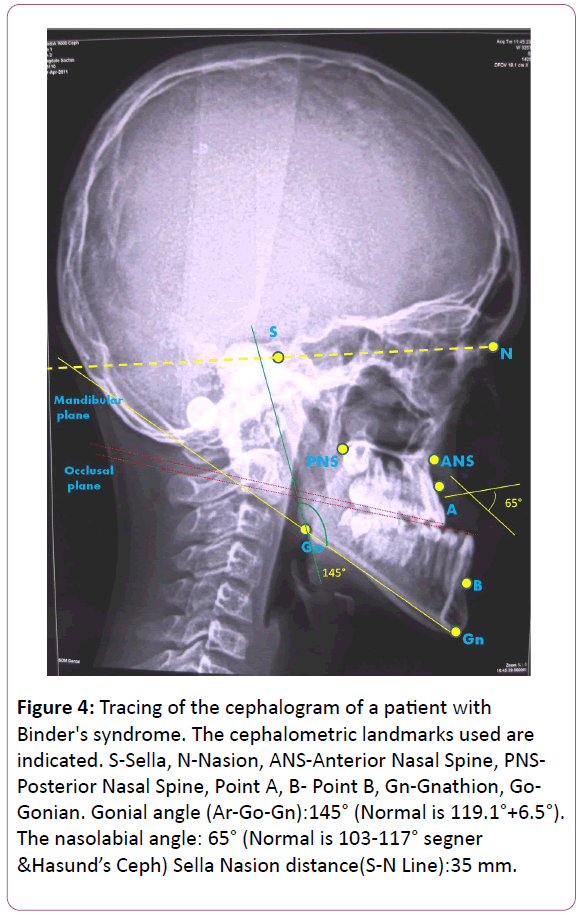 Binder’s syndrome patients show characteristic appearance which are easily recognizable [10] such as,

• Caries & Periodontium: Due to the physical limitations and intellectual deficit in some patient’s leads to accumulation of biofilm develops gingivitis and carious lesions. In pedo patients caries progression is faster, due to lower mineral content leads to early loss of tooth structure which affects the occlusion [12].

Keppler-Noreuil et al. did a study on 24 patients in which 13 patients had trisomy 21, two with trisomy 18, one with mosaic trisomy 21, one with vitamin K epoxide reductase deficiency, one patient had Stickler syndrome, and another had fetal warfarin syndrome; and one case of Robinow syndrome was detected [5].

Olow-Nordenram et al. stated that 44% of a group of 43 patients presenting BS had malformations of cervical vertebrae, the atlas and axis being the most frequently affected [13]. Another study revealed that 15 of 28 patients (53.5%) suffered from cervicospinal and craniospinal anomalies [14]. Antoneli et al. reported a case with BS had mild conductive hearing loss and a cleft palate [15].

• Hypoplasia of the middle third of the face,

• Reduced sagittal development of the nose,

• Reduced sagittal depth of the nasopharynx,

• Reduced vertical growth of the maxilla.

Binder’s syndrome can be easily diagnosed with the help of 2D and 3D ultrasounds, beginning with the 21st week of pregnancy. It should be possible to distinguish each of these syndromes on the basis of additional historical and clinical features (Table 1) [1,7].

Treatment includes Orthognathic and cosmetic surgery. Holmstrüm and Kahnberg recommend a two-stage surgical procedure, first is maxillary osteotomy followed by the nasal improvement, both independent of the patient's age [17]. Malalignment of teeth needs orthodontic treatment Maxillary retrognathia can be corrected by a Le Fort one maxillary advancement. Nasal septum, nasal bones and alteration of the glabellar depression are done in a Le Fort two osteotomy.

Binder’s syndrome is a facial anomaly with hypoplasia of the nasomaxillary structures due to disturbance of growth in the prosencephalic induction centre. The patient must be kept under observation by the orthodontist as well as plastic surgeon since birth. Depending upon the severity of the malformation surgical intervention, nasal reconstruction, orthognathic as well as orthodontic treatment is necessary. 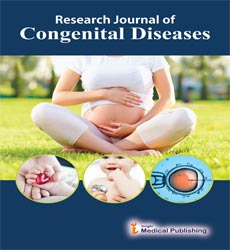