Incidence of functional gastrointestinal disorders such as functional dyspepsia or irritable bowel syndrome is high [1] and, therefore, has tremendous epidemiologic significance [2]. These disorders are not life threatening; however, they may have severe impact on quality of life for affected patients [3]. Preparations containing herbal extracts such as STW 5 (Iberogast, Steigerwald Arzneimittelwerk GmbH, Darmstadt, Germany) were shown to be effective to treat these disorders in clinical trials [4]. STW 5 is a cocktail of different herbal plant extracts that has been used for the therapy of functional gastrointestinal disorders for decades [5]. Comprehensive research was performed to explore mechanisms of action of STW 5 in detail, since the drug was initially designed simply based on empirical physician experience. This research provided evidence that STW 5 exerts multiple effects on gastrointestinal physiology. Experimental data showed multi-target action of STW 5, spasmolytic and prokinetic effects depending on the part of the gastrointestinal tract investigated [6]. It was shown that STW 5 enhances antral motility [7]. Furthermore, STW 5 seems to have antiinflammatory [8] and pro-secretory effects [9]. Although experimental data provides evidence for STW 5 effects, it does not address visceral hypersensitivity that is considered to be a key mechanism in the development of functional gastrointestinal disorders [10]. The current concept of visceral hypersensitivity is well-established and suggests that physiological stimuli of the gastrointestinal tract, that are usually below threshold of consciousness, are not filtered as in healthy individuals but are rather perceived as pain or abdominal discomfort. To investigate a potential modulatory action of STW 5 on visceral sensitivity, we tested a panel of previously standardized stimuli in a rat model [11] and demonstrated that STW 5 reduced visceral afferent sensitivity to bradykinin (BK), serotonin (5-HT) and mechanical stimulation. These stimuli were chosen as they sensitize a wide range of intestinal afferents in small bowel and colon. STW 5 reduces afferent neuronal sensitivity to many stimuli. This may be attributed to the fact that the preparation contains different herbal extracts. These observations lead to the question whether a detailed investigation of single drug compounds may help to identify specific actions. This may potentially allow improving this herbal preparation by combining specific effects of single compounds. The aim of the present study was, therefore, to investigate the effect of the main compound bitter candytuft (Iberis amara, STW 6) on colonic afferent sensitivity. We hypothesized that bitter candytuft is capable to reduce afferent sensitivity only for specific stimuli in contrast to STW 5.

Male C57BL/6 mice (Charles River, Sulzfeld, Germany) weighing approximately 20 g were kept under a 12 h/12 h dark/light cycle with free access to food and water. The study protocol was approved by the local Institutional Review Board (Government of Bavaria) prior to experiments. Animals were sacrificed by an anesthetic overdose (Isoflurane, Abbott, Baar, Switzerland) before the colon was harvested with the adjacent mesentery. The distal colon was removed along with the lumbar colonic nerves, and the bundle containing the inferior mesenteric ganglion, intermesenteric nerve, inferior mesenteric artery was then transferred into pre-gazed Kreb’s solution described below.

Details of in vitro afferent nerve recording were described previously. The entire colon was placed in a culture dish containing ice-cold Kreb’s solution (mM: Na+ 143.5, K+ 5.9, Cl- 126, Ca2+ 2.5, Mg2+ 1.2, H2PO4 1.2, SO4 1.2, HCO3- 25, glucose 10 and sodium butyrate 1, pH 7). Then, the cecum was removed. The mesentery of the ascending colon was preserved and placed into a custommade two-chamber organ bath for afferent nerve recordings. The colonic segment was superfused with Kreb’s buffer gassed with an O2/CO2 mixture (95% / 5%) at a rate of 10 ml min-1, temperature 32°C. In order to avoid artefacts during afferent nerve recordings, spontaneous colonic motility was inhibited by the L-type calcium channel blocker Nifedipine (Sigma Chemicals, St. Louis, MO, USA). Nifedipine was added to the perfusion solution at a concentration of 1 μM as previously described to reduce smooth muscle activity and to inhibit degranulation of mast cells and enterochromaffin cells (EC cells) to avoid secondary effects [15,16]. The mesenteric neurovascular bundle was then pulled through a small gap into the recording chamber. The opening was closed with vaseline. Then the recording chamber was filled with colourless heavy liquid paraffin (Sigma Chemicals, St. Louis, MO, USA) for insulation and heated to 32°C. Cannulas were inserted into the lumen on both ends of the colonic segment. The lumen was continuously perfused with Kreb’s solution (10 ml per hour). The distal cannula remained open to air. Intraluminal pressure was recorded with a connected pressure transducer (Neurolog pressure amplifier NL 108, Digitimer Ltd., Welwyn Garden City, UK). In the recording chamber, the mesenteric nerve was dissected off the neurovascular bundle which is located in the mesentery. Then, the mesenteric nerve was placed on one arm of a bipolar platinum electrode, while connective tissue served as a reference on the other arm. Electrodes and pressure transducer were connected to an amplifier/filter system (1902 Cambridge Electronic Design (CED), Cambridge, UK) and transferred to a power Micro 1401 AD interface system (CED). Recordings were monitored online by running Spike 2 software (version 4.01; CED) and saved to the hard drive for offline analysis.

After establishing the afferent nerve recording, baseline discharge was monitored for 15 minutes to ensure a stable signal. Then, serosal perfusion of the organ bath was stopped and 10 μM 5-HT (Sigma Chemicals) was added to the perfusion chamber. After two minutes incubation time a washout period of 10 minutes was started to allow the signal to recover to baseline. For mechanical ramp distension up to 80 cmH2O, the cannula connected to the colonic outlet was closed until reaching an intraluminal pressure of 80 cmH2O. Then the outlet cannula was opened and pressure was released. After a recovery period of 10 minutes, the serosal perfusion was stopped again and BK (Sigma Chemicals) at a concentration of 0.5 μM was added to the organ bath for an incubation period of two minutes. 5-HT and BK dose response experiments were performed previously (data not shown). Each recording was started 30 s prior to 5-HT and BK application and maintained for 2 minutes.

Colonic segments were pretreated in vitro to evaluate afferent nerve sensitivity as follows:

1. Superfusion of colonic segments in vitro with STW 6 10 minutes prior to chemical and mechanical stimulation (21.2 ×10-6 mg ml-1; lyophilized powder dissolved in 0.9% saline).

2. Superfusion of colonic segments in vitro with STW 5 prior to chemical and mechanical stimulation (57.1 ×10-6 mg ml-1; lyophilized powder, dissolved in 0.9% saline).

3. Superfusion with vehicle (0.9% saline) prior to chemical and mechanical stimulation.

STW 5 concentrations were chosen according to the previously published data. 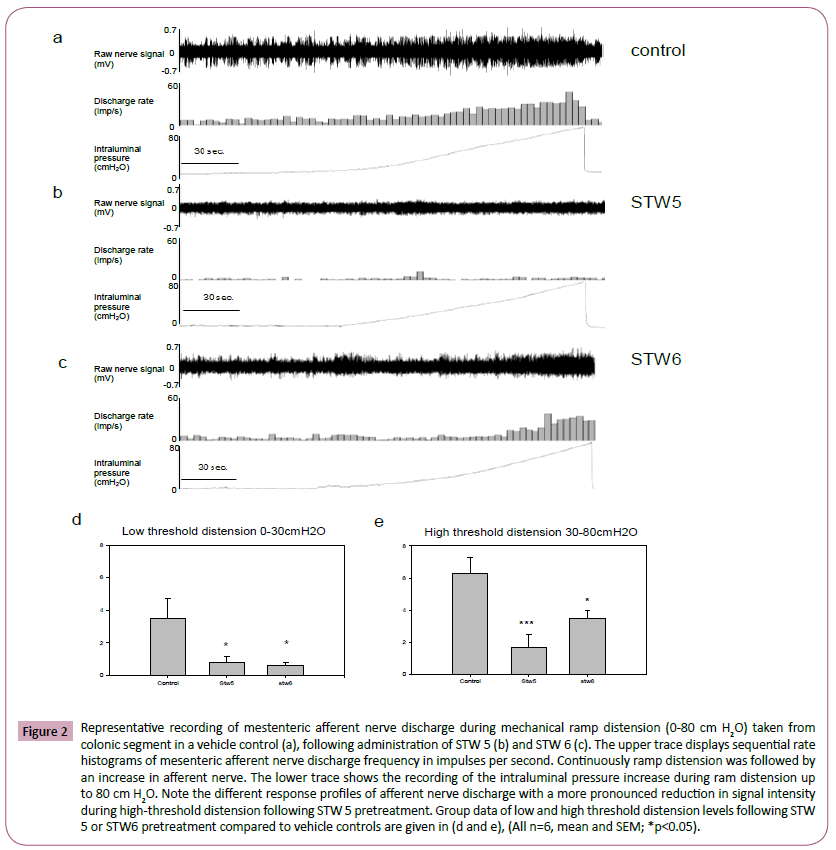 The present study investigates the effect of STW 6 (Iberis amara), the main compound of STW 5, on colonic afferent sensitivity compared to STW 5. The present in vitro model allows to characterize colonic afferent nerve sensitivity to chemical and mechanical stimulation after administration of STW 5 and STW 6 without potential systemic interferences e.g., by changes in local tissue blood flow or secretion. However, baseline stimulation of afferent nerve fibers induced by intestinal ishemia might occur in this model. Those stimuli, are unlikely to provoke responses by alterations in blood pressure as described previously [17]. To avoid secondary nerve responses by intestinal motor events, we added the L-type calcium channel blocker, Nifedipine, to the organ bath. Nifedipine minimizes the nerve response to complex stimuli such as intestinal ischemia or spontaneous intestinal motor events. This L-type calcium channel blocker inhibits the degranulation of mast cells and enterochromaffin cells that may also give rise to indirect nerve responses. In our study, defined stimuli were administered with predominantly direct actions on afferent nerve terminals, so that they are unlikely to be altered by Nifedipine. Since the applied chemical test stimuli act on the serosal site of colon only, it is unlikely that additional subtypes of colonic afferent nerve fibers except lumbar splanchnic nerves, which predominantly contain spinal primary afferents, are involved [18]. Experimental studies describe that 5-HT has the potential to stimulate colonic lumbar splanchnic afferent nerve fibers via 5-HT3 receptors. In the colon, the 5-HT3 receptor mediated pathway is involved in signalling of non-physiological symptoms including pain since 5-HT3 receptor antagonists improved pain and discomfort in clinical settings. However, approximately 50% of colonic afferents do not respond to a 5-HT3 receptor selective agonists indicating that other 5-HT receptors such as 2-HT2, 5-HT4, 5-HT6 and 5-HT7 receptors are involved in the signal transduction in the colon. It was shown previously that STW 5 has the potential to alter afferent sensitivity to a panel of different stimuli such as 5-HT. In the present study colonic afferent nerve response to 5-HT was reduced by STW 6 and STW 5, with a more profound effect of STW 6. One can speculate that STW 6 may be a key component of STW 5 acting on 5-HT sensitivity on colonic lumbar spinal primary afferents. However, the exact mechanism warrants further examination. STW 5 but not STW 6 reduced intestinal afferent sensitivity to BK. BK stimulates visceral afferent neurons via B2 receptor [19,20]. In the colon BK is a selective stimuli of splanchnic serosal afferents and activates high and low threshold mechaosensitive nerve fibres. BK can sensitize mechanosensitive afferents in the colon [21]. In the current setting we applied BK after mechanical ramp distension to exclude a possible potentiation of mechnosensitive afferent nerve discharge induced by BK. Apparently the multicomponent drug STW 5 but not it’s single component STW 6 is capable to attenuate the afferent nerve reponse to BK. Thus, other compounds of STW 5 seem to mediate this action on BK sensitivity. Which components are involved in the desentization of colonic afferents process remains to be determined. Afferent nerve discharge to luminal ramp distension was reduced following pre-treatment with STW 6 and STW 5. Interestingly, STW 6 and STW 5 both desensitized low threshold afferent nerve fibers (10- 30 cm H2O) contrary to the reduction of high threshold mechanical afferent nerve response (30-80 cm H2O), which was only observed after STW 5 pre-treatment. It appears that STW 5 desensitizes low and high threshold mechanosensitive spinal colonic afferents. In contrast to the small bowel, where low threshold distension is mediated via vagal and high threshold distension via spinal afferent nerve fibers [22,23] colonic afferents have three distinct origins with different activation profiles. The mucosal colonic afferents closely resemble their counterparts in the small bowel (vagal afferents) since small pressure changes can activate these nerve fibres and the baseline discharge frequency was low. Serosal colonic afferents are non-responsive to circumferential stretch, however many of the colonic serosal afferent fibres are responsive to chemical stimulation such as BK indicating an important role in the transmission of signals related to potential noxious stimuli. Muscular colonic afferents convey small changes of intraluminal pressure. They are responsive to circumferential distortion, but not to graded increase of circumferential strain. Given these findings we assume that in the current study the single component STW 6 acts on mucosal and serosal colonic afferents whereas the multitarget drug STW 5 can differentially desensitze all three different origins of colonic afferent nerve fibres. In addition it may well be possible that mechanical ramp distension leads to an activation of intermesenteric fibers of nonspinal origin such as intestinofugal fibers which originate from enteric neurons within the gut wall such as mucosal or muscular afferents and project to prevertebral ganglia [24] and not to the spinal cord. It is important to consider this small number of fibers as a potential contributor to recorded afferent discharge following ramp distension. In conclusion, STW 6 and STW 5 are capable to attenuate colonic afferent intestinal neuronal sensitivity to chemical and mechanical stimulation and possibly reduce visceral hypersensitivity, which is generally accepted as the prime pathomechanism of functional bowel disorders [25-32]. In contrast to STW 5, which desensitizes afferents to a wide range of stimuli, STW 6 inhibits predominantly colonic serosal afferent nerve discharge. Clinical studies investigating the effect of the single compound STW 6 (Iberis amaris) on patients with functional dyspepsia or irritable bowel syndrome are required to elucidate a role for STW 6 in clinical medicine.

This study was funded by the Steigerwald Arzneimittel GmbH, Darmstadt, Germany.

We wish to draw the attention of the Editor to the following facts which may be considered as potential conflicts of interest and to significant financial contributions to this work: Work was funded by the Steigerwald Arzneimittelwerk GmbH, Darmstadt, Germany.