Anatomopathological Profile of Primary Focal and Segmental Glomerulosclerosis in Children in Dakar: A Case Report of 61 Cases

Patients and methods: This was a retrospective and descriptive study during the period starting from the 1st of January 1994 to 31st December 2014. Were included in the study patients aged 0 to 15 years and presenting at least one FSGS typical glomerular lesion according to the Columbia 2004 classification.

Conclusion: FSGS revealed itself through steroid resistance in 54.4% in our series. Renal biopsy showed a higher occurrence of the classic form.

Segmental and Focal Hyalinosis (SFH) associates three types of glomerular lesions: initially podocytic cell alterations, hyaline deposits and sclerosis [1,2]. These lesions are called segmental when they partially involve the glomerulus or focal areas when all the glomeruli are not affected [3,4]. For a standardized approach, the classification of Columbia 2004 proposes five morphological subgroups of SFH: the classical (non-specific) form, the perihelial form (vascular pole), the cellular form (endocapillary hypercellularity), the collapsing (destructive) form and The SFH of the tubular pole ("Tiplesion") [5,6]. In most cases, SFH is found in children with steroid-resistant nephrotic syndrome (NS) and progresses to chronic renal failure (CKD) in 20-30% of patients [1-4]. Data on SFH in children in Senegal are non-existent to our knowledge. Our objective in this study was to classify histologically the lesions of SFH found in children in Dakar.

This study was conducted in the Department of Pediatrics, Adult Nephrology and Anatomy Pathology of the Aristide Le Dantec Hospital (HALD) and in the Department of Pathology of the General Hospital of Grand Yoff (HOGGY). This was a descriptive retrospective study during the period from 1 January 1994 to 31 December 2014 (21 years). Renal biopsies were performed by nephrologists and/or pediatricians initially with Silverman 16G and 18G needles and then with the automatic pistol from 2013. For each child, two (02) fragments of kidney were taken of which One fixed in the mixture comprising Alcohol, Formol and Acid (AFA) for reading by optical microscopy (MO) and the other fixed in Michel's liquid for reading with immunofluorescence (IF). Between 1994 and 2009, the fragments were read in France in the university hospitals of Necker and Saint Louis. As of 2010, the presence of a renal histopathologist, trained in Necker, in Senegal, allowed reading of the kidney fragments on site. Patients aged 0-15 years and presenting at least one FSGS typical glomerular lesion according to the Columbia 2004 classification were included in this study (1:2). Patients without HSF lesions were excluded from the study. The diagnosis of primary SFH was retained in the absence of signs of systemic or general disease, either clinically, biologically or histologically. Nephrotic syndrome (SN) was defined as proteinuria >50 mg/kg/24 h associated with hypo-protidemia <60 g/L and hypo-albumin <30 g/L. Corticoresistance was defined as the persistence of SN after 4 weeks of oral prednisone at 2 mg/kg/day and three perfusions of methylprednisolone at 1 g/1.73 m2 body surface area. The data were obtained from the patient record, the biopsy application form, the biopsy register and the histopathological report. We studied the age, sex, geographic origin of patients, indications of renal biopsy and we classified primary lesions of SFH found according to the classification of Columbia 2004. The descriptive study was carried out by the calculation of Frequencies for the qualitative variables and the calculation of the means with their standard deviation for the quantitative variables using the SPSS 18.0 software. This study received approval n° 0223/2016/CER/UCAD of the research ethics committee of Cheikh Anta Diop, University in Dakar, Senegal. 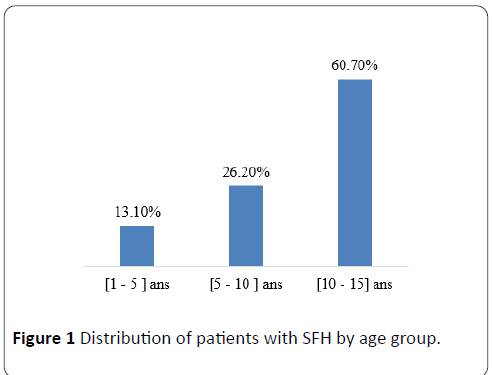 Figure 1: Distribution of patients with SFH by age group. 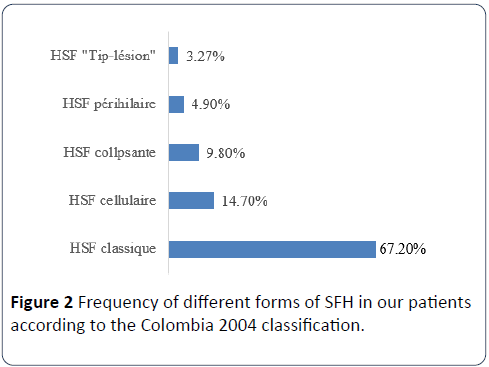 Figure 2: Frequency of different forms of SFH in our patients according to the Colombia 2004 classification. 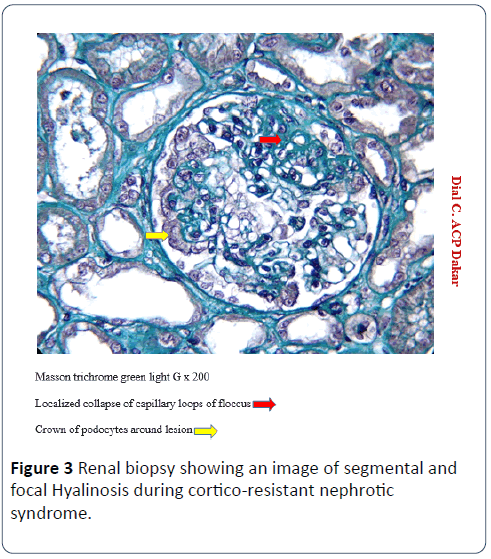 Nephroprotective therapy was initiated in all cases associated with low-dose corticosteroid therapy. Only 26.22% (n=16) of the cases could be specified. Half of them (50%) (n=8) had progressed to chronic terminal renal insufficiency (CRFI). Chronic hemodialysis was performed in 62.5% (n=5) of cases of HCFI by HSF.

The average age of our patients at the time of diagnosis was 11 years. Different studies have shown that the mean age at diagnosis of SFH varies between 6 and 7 years [9]. This difference in age with our study is due to the delayed realization of the renal biopsy due to the deficiency of nephrologists and histopathologists in sub-Saharan Africa. In our study, the primary indication for PBR was idiopathic nephrotic syndrome cortico-resistant (50.8%).

Nephrotic syndrome in particular cortico-resistant is the most frequent indication of renal biopsy in children and is often associated with SFH lesions [10-12]. This corticoresistance of SFH during renal biopsy in children is described in Morocco (83%) and Congo Brazzaville (23%). Other indications of renal biopsy revealing lesions of SFH were less frequent in our study compared to cortico-resistance. We found impure nephrotic syndrome in 26.2% (n=16), unexplained acute renal failure in 6.5% (n=4). According to the 2004 Columbia classification, the classical form accounted for 67.2% of the SFH lesions. The predominance of this form is estimated by Das et al. [13] to 44.6% in India and Swarnalatha et al. [14] to 62.2%. The frequency of cellular and collapsing forms varied between 4.6% in the Das study and 14.7% in our series. These studies show that the prevalence of SFH subtypes is different in these populations and that conventional SFH is the most frequently found.

The prevalence of SFH subtypes is different in our study population. Conventional SFH was the most frequently described lesion in our series. The Columbia classification is useful in kidney biopsy reports. For our population, it is necessary to improve the reading of the kidney biopsies, especially since renal transplantation is authorized in Senegal since 2015.