As part of a Triple Aim project, we examined the effect of an early geriatric follow-up after discharge in a quasi-randomized controlled trial of geriatric patients (≥75 years) acutely admitted to the emergency department with one of nine diagnoses: pneumonia, COPD, delirium, dehydration, urinary tract infection, constipation, anemia, heart failure, and other infections. The intervention consisted of a follow-up visit to the patient’s home on the first working day after hospital discharge. The visit was performed by a nurse and a geriatrician and tailored to the patient’s need. The control group was discharged according to standard procedures, which included follow-home or telephone follow-up. From June 2014 to November 2015, 1330 patients were included. We found a statistically significant reduction in the read mission rate in the intervention group compared to the control group (12% vs. 23%; P < 0.001). The adjusted hazard ratio in th intervention group was 0.50 (95%CI: 0.38-0.65). In the intervention group more patients were discharged directly from the emergency department, instead of being transferred to the geriatric ward, compared to the control group (56% vs 49% p=0.01).The intervention reduced the length of the primary hospital stay median 2 days (1–7) vs. 3 days (1–8) in the control group (p= 0.03). Preliminary data on 30 and90 day mortality show no statistically significant difference between the groups. 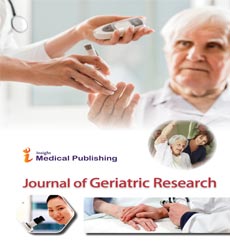