Background: Asthma and allergic rhinitis are two major respiratory conditions of public health concern worldwide. These conditions are also identified as risk factors for atherosclerosis, a contributor of cardiovascular outcomes. Our objectives were to investigate the independent and concomitant role of allergic rhinitis and asthma on cardiovascular and all-cause mortality.

Methods and findings: The study participants consisted of a probability sample of US civilians from the Third National Health and Nutrition Examination Survey; vital status was ascertained through the National Death Index. Men and women ≥40 years from all racial/ethnic backgrounds were included in the study. For all-cause mortality (n=9,450) and CVD-specific mortality (n=9,410), the baseline characteristics of participants were similar except for age, education, and smoking status. For both the outcomes, hazard ratios were estimated using Cox regression models.

Conclusion: Our study provides preliminary evidence of the independent and concurrent association between allergic rhinitis and asthma and all-cause and CVD-specific mortality.

Inflammation appears to be a critical mechanism linking allergic rhinitis and asthma with many chronic conditions. This possible link is demonstrated by several studies where atopic patients are at increased risk for diabetes, and specific cancers such as prostate, bladder cancer, and lymphoma [10-12].

Increased susceptibility of Cardiovascular Disease (CVD) among atopic patients has been demonstrated by some studies where inflammation is suspected to play a key role in the atherosclerotic process [10-14]. For instance, histamine released by the mast cells during atopy could increase vascular permeability permitting the influx of lipoproteins and other chemicals involved in the formation of atherosclerotic plaques [13,14], and other products of mast cells such as cytokines and growth factors could increase endothelium injury and inflammatory response [13]. These observations lead us believe that if there is an association between atopic conditions with other diseases via inflammation, it may be more likely be demonstrable in CVD compared to the other diseases. Taken collectively, a combined history of having asthma and allergic rhinitis may carry more risk of CVD than having a history of only one condition due cumulative inflammatory load.

The study population included participants of NHANES III, from whom data was originally collected from 1988 up to 1994, and for whom mortality data was obtained until December 31, 2006 [15]. We utilized NHANES III participants that were ≥40 years of age at the time of home interview and whose mortality was ascertained based on the probabilistic match between the NHANES III records, and the National Death Index (NDI) records were eligible for this retrospective cohort study. Study eligibility was restricted to NHANES III participants who reported no prior diagnosis of chronic bronchitis or emphysema at baseline (time of the interview). Study eligibility was then restricted to participants with complete data on allergic rhinitis and asthma at baseline as well as completes data on variables of interest at baseline. 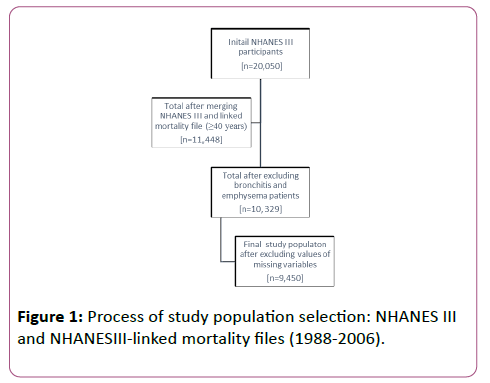 Univariate and bivariate analyses were performed to compare the frequency and percent distributions of was used to test the null hypothesis of independence for categorical variables (p-value of <0.05, two-tailed). The covariates assessed for confounding included age, sex, race, BMI, smoking, alcohol, education, and physical activity.

Table 1: Characteristics of the study participants by allergic status at baseline for all-cause mortality: NAHANES III and NHANESIIIlinked mortality file (1988-2006).

Another potential source of dilution of effect in previous studies has been in the broad categorization of allergic conditions. Matheson et al. [17] found the risk of stroke mortality was 50% higher among survey participants that reported previously diagnosed allergic rhinitis, asthma, or both the conditions (as one exposure) compared to the non-exposed category [HR: 1.52 (95% CI: 0.80, 2.92)] [17]. We estimated the risk of stoke mortality to be 1.16 (95% CI: 0.68, 1.98) from allergic rhinitis alone, 0.66 (95% CI: 0.26, 1.70) from asthma alone and 3.75 (95% CI: 1.09, 13.00) from a combined history of allergic rhinitis and asthma, which supports a dilution of effect when these categories were combined into one group. While the main interest of this study was in CVDspecific mortality, all-cause mortality was also examined to gain perspective in interpreting results for CVD deaths associated with allergies. Although it is possible the risk of allcause mortality could be driven mainly by CVD-related deaths, the proportion of deaths due to CVD in our data (47.8%) do not support this explanation (data not shown). Hence, we suspect that other causes of mortality associated with allergies (e.g., cancers and autoimmune diseases) may have influenced the risk estimates for all-cause mortality.

The results of this study should be interpreted cautiously considering its limitations. We did not have data regarding the severity and onset of allergic rhinitis and asthma, and were unable to determine if the duration of disease increased risk among those with persistent/severe forms compared to the ones with intermittent/mild forms with shorter duration. Internal validity of the study could have been threatened when the exclusion criteria was applied during study population selection. Participants that were excluded from the study could be much older from those who were included. However, the demographics of the study participants were similar to those who were excluded, making selection bias less likely due to subject participation.

Measurement error is also highly likely in this study, which could have influenced our study findings. Unlike asthma, allergic rhinitis is considered a mild disease and over 50% of people do not seek care [18-20]. Therefore, NHANES III participants may have severely underreported this condition, as they were not “physician diagnosed.” Similar to allergic rhinitis, many participants may have undiagnosed asthma as well. In a population-based study (n=1,149) conducted in Denmark among those with allergic rhinitis or asthma, of all the asthmatic cases, almost 50% of the participants had undiagnosed and untreated asthma [21].

Despite these limitations, there were a number of strengths associated with this study. This is the first longitudinal study to discern the combined effects of two common allergic conditions (allergic rhinitis and asthma) on CVD-specific mortality. We accounted for the key confounders that could obscure our study findings. Some of the previously conducted studies did not control for COPD, which could be a strong confounder for the explored relationships [17,22]. However, we have excluded participants having two major forms of COPD, chronic bronchitis and emphysema. Additionally, these studies controlled for factors that could have mediated the pathway (mediators), instead of acting as a confounder. For example, controlling for hypertension could have biased their results as there is evidence that allergic conditions can increase blood pressure [23,24].

Our results suggest that inflammation being the link between atopic diseases such as asthma and allergic rhinitis and CVD-specific mortality is a feasible hypothesis. This study provides new evidence and should be used to support future molecular studies measuring total inflammatory burden in the body contributed by these two allergic conditions. Additionally, findings uncovered from this study may aid health practitioners to closely monitor patients that have prior diagnoses of allergic rhinitis and asthma to reduce the burden of CVD-specific mortality. However, the need for public health interventions to decrease allergen exposures and premature mortality, assuming there is a causal relationship, cannot be recommended until absolute measures of association (e.g., PAR %) rather than relative measures of association (e.g., HR) determine public health significance of this study’s findings. Future prospective studies that incorporate data related to episodic events and duration of the disease, in order to accurately measure the long-term effects of these conditions, it will be important to further elucidate the joint effects of allergens on mortality.

The results of our study indicate that a combined history of asthma and allergic rhinitis may increase the risk of premature mortality from CVD, and from all-causes combined. Future molecular studies that utilize specific methods to ascertain allergic conditions (e.g., use of immunoglobulins), and rigorous population-based studies should focus on the long-term health effects of allergic rhinitis and asthma. If additional robust studies replicate our findings, public health efforts can be focused on prevention and treatment strategies that could reduce the burden of morbidity and mortality associated with allergic conditions.

This research study was not supported by any grant funding.