A theoretical analysis has been done on some physical parameters like electro–negativity, average coordination number, glass transition temperature etc. which plays an important role in the glass formation and stability of glassy alloys. These parameters are calculated for Ge–Bi–Se amorphous system with variation in Bi content. The Ge–Bi–Se system, with two combinations viz: Ge10BixSe90-x and Ge20BixSe80-x (x = 3, 6, 9, 12, 15 atomic %), is found to be in accordance with the earlier researches. The addition of Bi to Ge-Se glassy alloys supposed to vary linearly the whole category of physical properties. During studies to develop a material combination useful for phase change optical recording, smooth linear changes were observed with increase in Bi content.

As it has been a well established fact that chalcogenide glasses have a number of potential technological applications such as memory switching, inorganic photo resist, xerography, IR detection and transmission etc. [1,2]. The amorphous chalcogenide can be classified into the elemental, binary, ternary, etc., and the alloys can be divided into stoichiometric (GeSe2, Bi2S3) and nonstoichiometric compositions (S–Se, Bi–Se). For the elements, the sequence of S, Se, and Te shows that bonding changes from molecular, covalent, to metallic. Among these three elements, only Se is available as amorphous films and glassy ingots at room temperature. The glassy structure is the simplest, consisting mainly of entangled−Se−Se−chains. For ternary alloys, we can envisage several kinds of systems: the chalcogen mixture S–Se–Te, the anionmixed system such as Bi–S–Se, and the cation-mixed system such as Ge–In–Se [3,4].

But there is a lot of scope left even today, in the understanding of electronic states in the chalcogenides. It was suggested by earlier investigators that chalcogenides were very well suitable for a number of applications due to absence of rigidness in structure [5]. The addition of Bi in Ge-Se based glasses usually broadens the IR region of transparency as well as increase the chemical durability. To study the optical band gap, some researchers analysed the absorption spectra of thin films of Bi based compositions. It was reported that the optical band gap decreased sharply from 2.10 eV to 1.65 eV with the increase in the Bi contents from 0 to 10 atomic % [6,7].

In the present work, we have shortlisted Ge–Bi–Se glasses to study the compositional variation on physical properties. We have taken two combinations viz. Ge10BixSe90-x and Ge20BixSe80-x (x = 3, 6, 9, 12, 15 atomic %) to analyse various physical properties, viz.: average coordination number, lone pair, mean bond energy etc., by varying Bi content in all compositions as well as by fixing the Ge content 10 atomic % and 20 atomic % and hence by effectively decreasing The Se content so as to check the viability of material for optical recording devices.

Electro–negativity of the composition is nothing but the geometric mean of all the constituents of that particular composition. To make the alloy ionic in character, Bi may be used as dopant in Ge- Se system. We have studied electro– negativity using two well known scales viz, the Pauling scale and the Allred–Rochow scale. The value of electro–negativity according to the two scales is given in Table 1. It is clear from figure 1 and 2 that values of electro–negativity in both the scales decreases with increase in concentration of Bi from 3 to 15 atomic %, while it is seen to be decreasing with increase in Ge content from 10 to 20 atomic %. For the multi-component glasses, the average coordination number <Z> is calculated using standard method [10] for both the composition of Ge–Bi–Se system, <Z> is given by

Where α, β and γ are the atomic percentage of Ge, Bi and Se respectively and NGe(4), NBi(3), NSe(2), are their respective coordination number [11,12]. From the calculated values of average coordination number, as shown in figure 3 for both Ge10BixSe90-x and Ge20BixSe80-x systems values of <Z> increase with increase in concentration of Bi from 3 to15 atomic %. 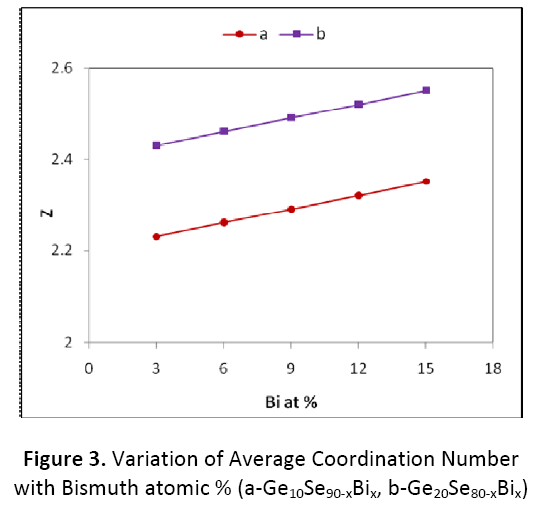 It was predicted by L. Pauling [13], that increase in the lone pair electron is responsible for the decrease in the strain energy in the system and structures as large number of lone pair favours glass formation. The lone pair can be calculated using the relation as mentioned below

Where <Z> is the average coordination number and V is the valence electron.

According to Zhenhua [14], the number of lone pair electrons must be greater than 2.6 for binary system and greater than 1 for ternary system. In the ternary system Ge-Bi- Se studied here the lone pair is found to be greater than 1 as shown in figure 4.The number of lone pair is found to be decreasing with the increase in the Bi content from 3 to 15 atomic % in both the combinations. But, as in case of electro– negativity, the lone pair electrons are also found to be on lower side for Ge20BixSe80-x as compared to Ge10BixSe90-x system. This may be attributed to the interaction between Bi ion and lone pair of electrons of bridging Se atom. So the present system under investigation can be obtained in amorphous glassy state. It is also well known that the system with large number of lone-pair electrons constitute a stable state. Chalcogenides with lone pair are also characterized by flexibility. This flexibility of bonds causes these atoms to immediately form amorphous network. R parameter plays a crucial role in analysing the results for further investigations. In the present study, we are emphasising on chalcogen rich combinations comprising of various materials. For a system to be chalcogen rich the value of parameter R should be greater than one and hetero-polar as well as chalcogen- chalcogen bonds should be present. The value of R parameter can be calculated using the relation given below:

Where α, β and γ are atomic frictions of Ge, Bi and Se respectively.

As mentioned in figure 6, the values of R for Ge10BixSe90-x are found to be decreasing from 3.551 to 1.765 for x = 3 to 15 atomic %, but still these are well greater than one, so this combination is well placed in the category of ‘chalcogen rich’. In case of next combination Ge20BixSe80-x, R goes on decreasing from 1.730 to 1.040 for x=3 to 15 atomic %. These are comparatively on lower side in comparison to the first combination. The comparison between the two compositions indicates that the value of R goes on decreasing as we increase concentration of Bi from 3% to 15% in both the compositions. This shows that our system is more or less chalcogen rich for both the composition taken here [15]. Where <E> is overall mean bond energy in eV/atom and Tg is in Kelvin.

For GeαBiβSeγ system, where (α + β + γ) = 1, in selenium rich systems (as R>1) both the heteropolar bonds and the chalcogen-chalcogen bonds are present. According to Tichy and Ticha [16, 17] the overall mean bond energy for the GeαBiβSeγ system is given by the relation

and Erm denotes contribution arising from weaker bonds that remains after the strong bonds have been maximized. Increase in the Bi content leads to the expected variation in various physical parameters, calculated theoretically, viz. average coordination number, electro– negativity, lone pair, overall mean bond energy, glass transition temperature etc., vary linearly for the two combinations Ge10BixSe90-x and Ge20BixSe80-x (x = 3, 6, 9, 12, 15 atomic %) of Ge–Bi–Se amorphous systems. The electro–negativity and lone pair, are found to be decreasing with the increase in the Bi content from 3 to 15 atomic % in both the combinations. It is clear from the values of lone pair that the system forms a stable state alloys. It is observed that Ge-Se-Bi glassy system for both the combination is chalcogen rich as the value of parameter R >1. The results here clearly depict variations in overall mean bond energy and glass transition temperature with increasing the content of Bi from 3 to 15 atomic %. Hence the above discussed results confirm that Ge–Se based amorphous systems has good glass forming ability hence both the combinations may be good for optical storage media.