Copyright: © 2018 Ito H, et al. This is an open-access article distributed under the terms of the Creative Commons Attribution License, which permits unrestricted use, distribution, and reproduction in any medium, provided the original author and source are credited.

Unilateral pallidotomy has been accepted as an effective therapeutic option for Parkinson’s disease (PD). We herein report a PD patient with wearing-off and dyskinesia who underwent left globus pallidus internus (GPi) pallidotomy using magnetic resonance imaging-guided focused ultrasound (MRgFUS). Her skull density ratio (SDR) was too low to perform MRgFUS procedure; however, it improved with bisphosphonate. Right-sided wrist rigidity, finger movement, and resting tremor improved immediately following the ultrasound energy delivery. Wearing-off improved and dyskinesia abolished after the procedure. No severe adverse events were observed. MRgFUS is a minimally invasive treatment; however, further investigations concerning not only technical problems such as SDR but also long-term efficacy and safety of this new treatment for PD patients should be necessary.

The first procedure of human stereotactic neurosurgery is a pallidotomy for a patient with Huntington’s disease. It was soon adopted for Parkinson’s disease (PD) because of its efficacy on most parkinsonian symptoms including levodopa-induced dyskinesias [1]. The posterior and ventral part of the globus pallidus internus (GPi) was confirmed to play an important role and posteroventral pallidotomy had been endorsed as an evidence-based surgical procedure for PD [2,3]. Magnetic resonance imaging (MRI)-guided focused ultrasound (MRgFUS) is a new technology that enables minimum intracranial focal ablation and applied several neurological and psychological disorders [4]. MRgFUS thalamotomy for essential tremor was approved by FDA. However, MRgFUS pallidotomy has not yet been approved for PD and we could find only one case report about unilateral GPi pallidotomy using MRgFUS for PD patient [5]. Herein, we report a 78-year-old Japanese PD patient who underwent left GPi pallidotomy using MRgFUS.

A right-handed 78-year-old woman developed resting tremor in right leg at 63 years of age. She was diagnosed with PD and started medication including levodopa, however, she developed disabling wearing-off at 69 years of age and levodopa-induced dyskinesia at 73 years of age. As of February 2017, she was prescribed 450 mg of levodopa/carbidopa, 300 mg of entacapone, 10 mg of selegiline, 0.75 mg of pramipexoleextended release, and 40 mg of istradefylline. Therefore, the levodopa equivalent dose (LED) was 773.5 mg [6]. Off-periods in 7 days prior to the pallidotomy were 3.5 ± 1.6 h on diary. Movement Disorder Society-Sponsored Revision of the Unified Parkinson's Disease Rating Scale (MDS-UPDRS) score was 10 for part I, 14 for part II, 19 (on medication) and 33 (off medication) for part III, and 8 for part IV. Unified Dyskinesia Rating Scale (UdysRS) score was 28. She was not demented and Mini-Mental State Examination was 26/30. Brain MRI showed no abnormal findings. We offered radiological or neurosurgical treatments including deep brain stimulation (DBS), however, she refused them because of the invasiveness.

We scheduled MRgFUS unilateral pallidotomy, which has been approved by the Review Board of Tokushukai Medical Alliance for advanced PD patients suffering from medication-resistant motor-fluctuation and who have refused other procedures involving DBS. The patient provided her written informed consent in accordance with the Declaration of Helsinki before treatment commenced. The skull density ratio, which reflects the amount of ultrasound energy that can penetrate the skull effectively [7], was 0.26 in February 2017 (exclusion criteria: ≤ 0.30). As she was associated with osteoporosis, we administered 35 mg of alendronate per week to elevate SDR to 0.36 after 6 months.

In August 2017, we performed MRgFUS unilateral GPi pallidotomy. MRgFUS ultrasonic bursts (sonications) were performed using a 1.5-Tesla MRI (Signa HDx, GE Healthcare, Milwaukee, USA) and a focused ultrasound system (Exablate 4000®, InSightec, Tirat Carmel, Israel). The day before pallidotomy, we performed T2-weighted MRI to plan the procedure. Based on the patient’s preference, we selected the left GPi as the target. We chose the target for GPi at a point 3 mm anterior to the midpoint between anterior and posterior commissure, 20 mm lateral from the midline, and 1.5 mm below. We stopped her medications for 24 h before MRgFUS to facilitate assessment during the procedure. On the day of the procedure, the patient was placed in a stereotactic head flame which was coupled to 1,024 elements, phased-array ultrasound transducer. After stereotactic targeting using MRI, we gradually increased the total energy of the sonications by either increasing the intensity or extending the sonication duration with marking left optic nerve to monitor its temperature. We finished the sonications when an adequate improvement in right-sided wrist rigidity, finger movement, and resting tremor following 12 sonications with an average maximum sonication time of 24.0 ± 11.6 s (range 10-42 s). The mean energy reached 20229.1 ± 13391.5 J (range 1206-35740 J) with a mean maximum temperature of 46.3 ± 4.0°C (range 39-51°C). We made two lesions in left postventral GPi. T2-weighted MR image following the procedure showed the increased intensity lesion in left GPi and the maximum ablated tissue volume was approximately 71.8 mm3 (Figure 1). Left temporal pain occurred during the sonication, however, we did not observe visual field deficit. Mild swelling of left eyelid occurred after the procedure, which improved within 3 days. 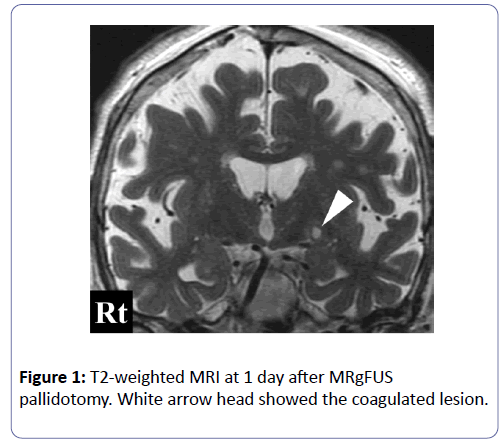 The therapeutic use of focused ultrasound was pioneered by Fry brothers in the 1950s [8]. To date, MRgFUS has been applied for several neurological and psychological disorders such as essential tremor [9], PD [5,10-12], obsessive-compulsive disorder [13], and neuropathic pain [14]. Regarding PD, target lesions are GPi [5], pallidothalamic tract [10], ventral intermediate nucleus (Vim) [11,12], ventro oralis posterior nucleus [12]. Na and colleagues reported the first MRgFUS GPi pallidotomy for PD patient with levodopa-induced dyskinesias, which is the only previous report of GPi pallidotomy using MRgFUS for PD. The patient achieved a 50.0% (on medication) and 61.0% (off medication) reduction in UPDRS part III score without changes in LED at 1 week [5]. We observed better improvements of motor functions despite the reduction of LED, which might have led to the disappearance of dyskinesia.

MRgFUS are characterized by minimum invasiveness, no exposure to radiation, and an immediate therapeutic effect (Table 2) [15]. However, poor permeability and high ultrasound absorption by the skull are a technological barrier. Skull volume and SDR exhibited relationships with the maximum temperature in target lesion. The former was negatively correlated with maximal temperature in the target lesion, whereas the latter showed a positive correlation [7]. We have to exclude MRgFUS candidates occasionally because of low SDR value. As GPi locates more laterally than Vim, reflection of ultrasounds in GPi pallidotomy is higher than that in Vim thalamotomy, which lead to a difficulty to achieve enough elevation of target lesion temperature. Thus, high SDR value is necessary especially in GPi pallidotomy. Because of the comorbid osteoporosis, we could administer bisphosphonate. Alendronate, a second generation bisphosphonate, had been reported to increase the degree and uniformity of bone matrix mineralization and decrease the porosity in cortical bone [16]. Alendronate could be one of the therapeutic options for MRgFUS candidates with low SDR value.

Table 2: The features of the standard radiological and neurosurgical treatments in functional neurosurgery and MRgFUS [15]; * - for implantation of pulse generator; ** - time spent in MRI room; ***- as a courtesy of InSightec.

MRgFUS GPi pallidotomy might become a viable therapeutic option for PD patients with medication refractory motor fluctuation who do not select standard neuromodulation therapies including DBS. However, not only technical problems but also long-term efficacy and safety of this new treatment for PD patients remain to be elucidated. Further investigations should be necessary.

We report the first experience of unilateral GPi pallidotomy using MRgFUS for PD patient from Japan. 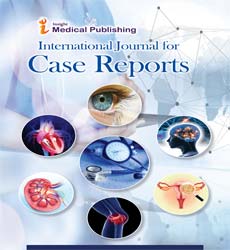