According to the conclusion of referenced article, None-catalyst and clean synthesis of symmetric and asymmetric indoles from electrochemical oxidation of 4-aminophenol in the presence of malononitrile in green media we are trying to integrate Internet of Things (IoT) with electrochemical synthesis under controlled potential conditions in order to use green solvent instead of organic materials, and create a solar-powered 24/7 automated machine for the industrial use cases.

While preparative electrolysis of organic molecules has been an active area of research over the past century, modern synthetic chemists have generally been reluctant to adopt this technology. In fact, electrochemical methods possess many benefits over traditional reagent-based transformations, such as high functional group tolerance, mild conditions, and innate scalability and sustainability, simple, high sensitivity, comparable or better accuracy, cheaper instrumentation and lower cost of chemicals used, limited used of environmentally unfriendly organic solvents.

Internet of Things is a system of devices and objects that can be transmitted through the Internet with a digital identity. In fact, this technology refers to the communication of objects with each other on the Internet without human intermediaries.

This technology has 3 main features:

This technology brings intelligence to any field of study by joining Algorithms, processes, hardware and software. An intelligent agent with a problem-solving approach provides the possibility of reasoning and decision making for an entity.

Indole derivatives have been a topic of substantial research interest and continue to be one of the most active areas of heterocyclic chemistry, particularly due to their natural occurrence and pharmacological activities [1,2]. Indole and its homologues are found in coal tar [3] and in molasses tar. Indole nucleus is also found in tryptophan (an important nutritional constituent), plant hormones, and certain important alkaloids [4], as well as in liver [5], pancreas [5], brain [6] and bile [7]. In addition, indole is a powerful anti-oxidant, and it appears to be especially effective against breast and cervical cancer because of its ability to increase the break-down of estrogen in the human body [8].

On the other hand, regarding the increase in the importance of green chemistry in organic synthesis, development of more efficient and environmental friendly processes for chemical transformation is desired [9].

Based on the definitions mentioned above and lab experiments done before, this methods is going to automate the current traditional electrosynthesis systems, to be solar-powered automated machine to produce more purified indoles with IoT protocols and hardware in order to make it easy for the whole green and none catalyst electrosynthesis procedure to work remotely and 24/7 without any need of human resources and reduction of human faults with much more performance rate.

Coulometry is based on an exhaustive electrolysis of the analyte. By exhaustive we mean that the analyte is completely oxidized or reduced at the working electrode or that it reacts completely with a reagent generated at the working electrode. There are two forms of coulometry: controlled-potential coulometry, in which we apply a constant potential to the electrochemical cell, and controlled-current coulometry, in which we pass a constant current through the electrochemical cell. In this project we use controlled-potential coulometry.

The procedure steps would be as follows:

1) The Solar panel would support and produce the energy of all the infrastructure hardware.

2) The servo motor which is attached to Arduino micro, connected and controlled over WiFi and IoT protocol via The HTTP server.

3) Based on this certain chemical procedure, the tank A would be filled with specified amount of 4-aminophenoles and the scale can weights the specific amount needed for the whole procedure. Then the remotely managed servo motor S1 would be rotated 90 degree and let the 4-aminophenoles pour into the mixer.

4) The tank B would be filled with specified volume of phosphate buffer pH=7 and as before the scale can weights the specific volume needed for the whole procedure. Then the IoT-based servo motor S2 would be rotated 90 degree and let the phosphate buffer pour into the mixer.

5) The tank C would be filled with specified volume of ethanol and as mentioned before, the scale can weights the specific volume needed for the whole procedure. Then the remotely managed servo motor S3 would be rotated 90 degree and let the ethanol pour into the mixer.

6) The tank D would be filled with specified amount of malononitrile and as before, the scale would weights the needed amount. Then the IoT-based servo motor S4 would be rotated 90 degree and let the malononitrile pour into the mixer.

7) The relay R1 that attached to the mixer would be set to ON via HTTP server or automatically as all the 4 servos rotated once; concurrently the solar-panel would support the energy needed for the graphite carbon electrodes. In this case the potential needed is 0.15 volt.

8) After the programmed delay which is needed to complete the redox process (a quantitative electrolysis by using an electrode with a large surface area, and with a high stirring rate typically requires approximately 60-120 min, although shorter or longer times are possible); the servo motor S5 would be rotating 90 degree and the mixture would be transferred to the UV dryer via gravity.

9) The programmed and remotely relay R2 would set the UV dryer status to ON for near 15 minutes.

10) After the time mentioned above, the IoT-based servo motor S6 would be rotated 90 degree and let the powder remained from the mixture solution, transfer to the purifier tank via gravity and after a specific amount of time, the servo motor rotates back to the base position.

11) The tank E would be filled with CH3CN/NaOH solvent and as before, the scale would weights the needed amount. Then the IoT-based servo motor S7 would be rotated 90 degree and let the CH3CN/NaOH pour into the purifier tank.

12) In the purifier tank, the precipitated solid was washed with acetonitrile and NaOH for separation of the remaining 4-aminophenol.

13) The servo motor S8 would be rotated 90 degree after almost no delay and let the purified solution transfer to the next dryer via gravity and after a short delay, rotates to the base.

14) Relay R3 which is connected to the UV dryer would be set to ON and works for around 15 minutes via HTTP server or automatically after the servo motor S8 is done.

15) After the programmed delay which is needed for the UV dryer, servo motor S9 would rotate 90 degree and let the finalized product which in this specific method is Indole powder, transfer to the tablet press machine and rotates back after a short delay.

16) The relay R4 which is connected to the tablet press machine would be set to ON after the servo motor S9 is done or manually via HTTP server. In this state we have pure indole tablets.

Based on the procedure above, the schematic of the HTTP server would be as follows:

In order to provide the best reactivity and hence the highest efficiency, the variables affecting synthesis should be investigated in this project are: pH, electrode potential, volume ratio of water and ethanol, molar ratio of raw materials, solvent required for purification.

All of these variables were examined in vitro and fully described in the article mentioned in the reference [1]. According to the mentioned observations and spectroscopy data, the ECECCC mechanism was proposed, which is shown in Schemes 1 and 2 for the electro-oxidation of 4-aminophenole in the presence of malononitrile. 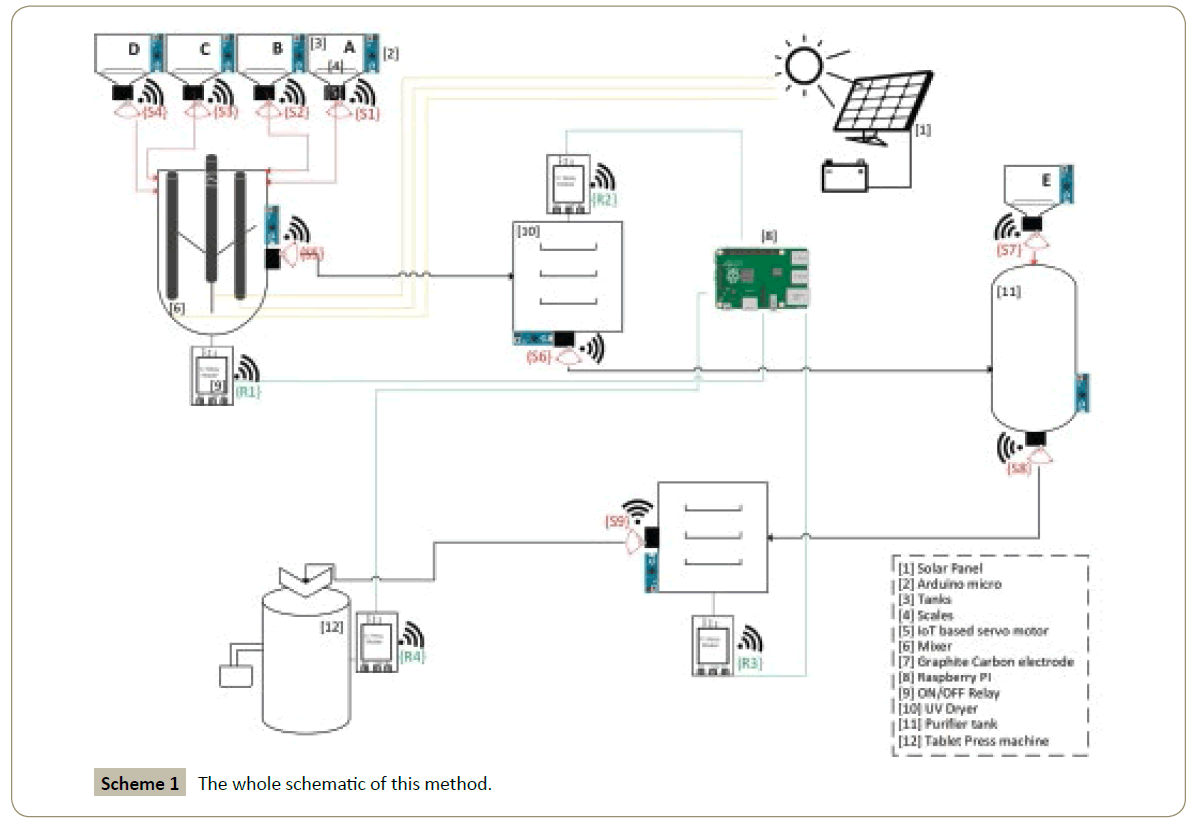 Scheme 1: The whole schematic of this method. 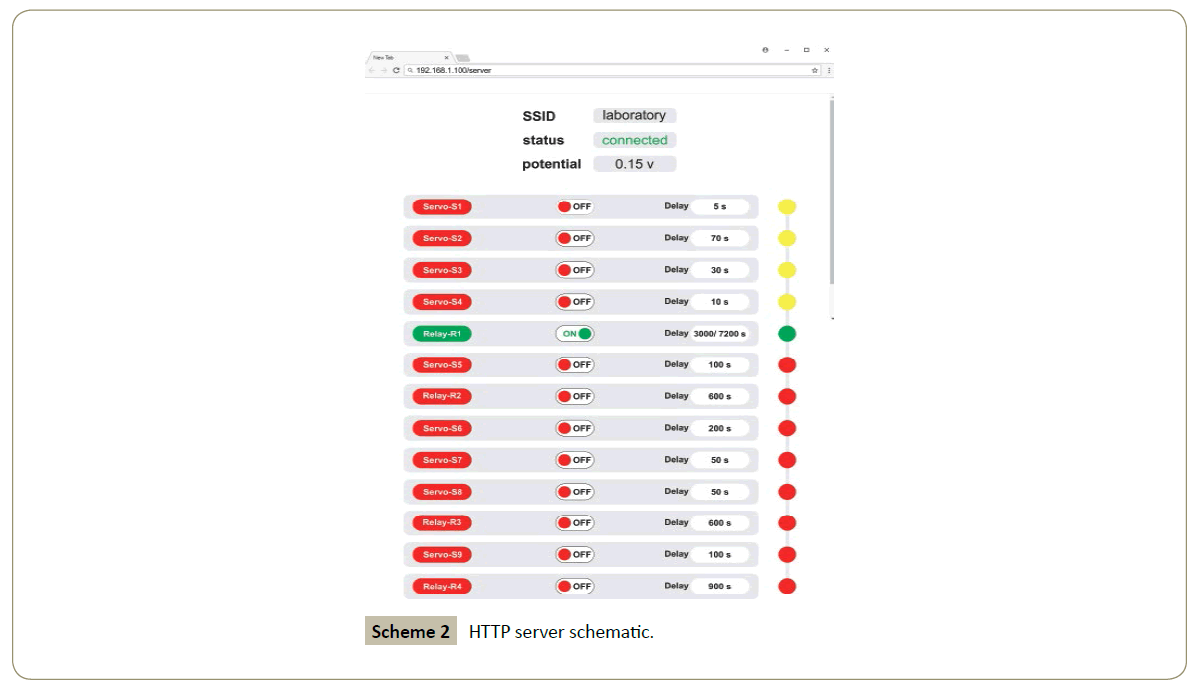 The implementation of voltammetric methods is strongly influenced by the electrode surface of the work. In fact, the electrode potential represents the activity of a specific type in the solution. The work electrode should provide features such as the response to a large noise response and a repeatable response. Therefore, its selection in the first place depends on two factors: the redox behavior of the desired test substance and the field flow in the range of potential for measurement. Other significant considerations include potential range, electrical conductivity, surface repeatability, mechanical properties, cost, availability and toxicity. In the electrochemical analysis, a number of materials have been used as electrode materials, most notably mercury, graphite carbon and noble metals (especially gold and platinum).

The use of graphite electrode is due to some of the following properties:

In this project, as work electrode, the proposed electrode number is 4 carbon graphite electrodes.

The main purpose for carrying out this work was the synthesis of new indoles via a facile, simple, and green synthetic path based on the electrochemical oxidation of 4-aminophenol in the presence of malononitrile. Cyclic voltammetry and controlled-potential coulometry indicated that the electro-oxidation of 4-aminophenol in the presence of malononitrile follows an ECECCC mechanism, presented in Figure 1. Clean and green synthesis, use of electricity instead of chemical reagents, high temperature, and reflux, as well as a one-step process conducted under mild conditions are the attractive features of this work. Furthermore, this study introduces electrochemistry as a ‘‘powerful tool’’ for the synthesis of new heterocyclic compounds such as indoles. The vision is to achieve a method that affects the future of drug production companies based on the 24/7 remotely automated electrosynthesis machine to produce more and purified tablets and drugs for the human health. 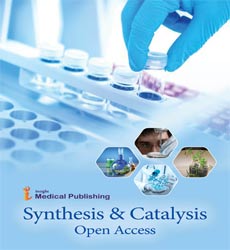