Epidemiology is concerned simultaneously with population of pathogens and host plant as they occur in an evolving environment, i.e., the classic disease triangle. Epidemiology has also been used for predicting the effects of climate change on plant disease. In epidemiological studies, initiation of the disease was noticed after 52 days of sowing. Variety (Rmt-1) 2.78 per cent after that, the linear progress of the disease was observed up to the maturity of the crop. The disease intensity was 5.74 per cent at flowering stage (1th SMW) and found highest (82.22) per cent at maturity (10th SMW) on local variety. The disease development was recorded higher during 3th to 6th SMW. In local cultivar disease progress was found higher during 80 to 94 day of crop age i.e. pod formation period. The disease increased faster during 3th and 6th SMW in rabi season. In the present study the optimum maximum and minimum temperatures for maximization of powdery mildew severity on fenugreek leaves were 27.6 °C to 35.1 °C in rabi under field condition. With respect to correlation and regression, averages of factors from 7 previous days to the observation days (D-7) were utilized. The results pertaining to correlation study, the meteorological variable correlation coefficient reflect the extent of association between PDI of local cultivar with different meteorological factors and crop age. Out of nine factors, crop age (0.969) was found significantly posi tive correlation while maximum temperature (0.517), mean temperature (0.605) and minimum temperature (0.617), morning relative humidity (0.210), afternoon relative humidity (0.306) and mean relative humidity (0.255) were showed significantly negative correlation with the powdery mildew intensity of local cultivar in rabi season. The result of regression analysis on an average meteorological factors with PDI during rabi season revealed that crop age (as independent variable) with PDI (as dependent variable) was identified as a crucial role for the development of powdery mildew epidemics by accounting regression equation is 96.8 per cent (R2= 0.968) variation during rabi season. 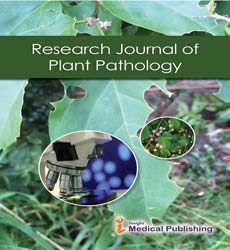