Copyright: © 2017 Belluschi I. This is an open-access article distributed under the terms of the Creative Commons Attribution License, which permits unrestricted use, distribution, and reproduction in any medium, provided the original author and source are credited.

Aortic valve stenosis is characterized by the narrowing of the aortic valve opening. From many years, the gold standard treatment is the surgical aortic valve replacement with biological or mechanical prosthesis. The sutureless approach has been introduced as an alternative to conventional surgery to reduce the cardiopulmonary bypass (CPB) time and enhance the minimally invasive technique. The aim of this editorial is to show the state-of-the-art of the sutureless technology, describing the benefits and the open issues that will enhance or delay the development of a surgery without sutures.

Aortic valve stenosis (AS) is characterized by the narrowing of the aortic valve opening and a consequent reduction in the anterograde blood flow generated by the left ventricle (LV) systole. It is the most frequent treated heart valve disease and it occurs in 2-7% of the population over 65 years old. The incidence increases with age. The etiology shows calcific degeneration as the most important cause in the elderly, while congenital defects (i.e. unicuspid, bicuspid and quadricuspid) and rheumatic disease, nowadays especially in the developing countries, are prevalent among the young. From many years, the gold standard treatment of AS is the surgical aortic valve replacement (AVR) with biological or mechanical prosthesis, depending on the age of the patients and their indications. High risk old patients benefit from the innovative transcatheter aortic valve implantation (TAVI) procedure. There are two types of cardiac bioprosthesis: stented or stent less valves, depending on the presence of a stent to support the leaflets, by the way they all need to be sutured to the native aortic anulus. The idea of a sutureless prosthesis was first introduced by Magovern and Cromie in 1962: the aim was to make the implantation easier and to reduce the surgical risk [1]. In 2011, the innovative sutureless bioprosthesis Perceval (Sorin S.p.A., Saluggia, Italy) was launched on the market (Figure 1). 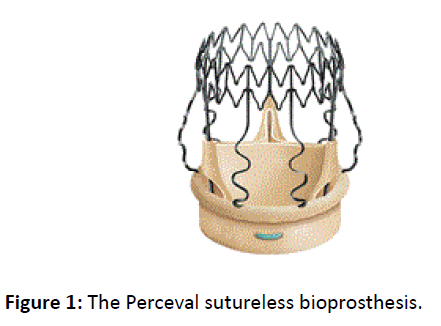 Perceval is a surgical sutureless self-expanding valve without a sewing ring, which has been introduced as an alternative to conventional surgery to reduce the cardiopulmonary bypass (CPB) time and enhance the minimally invasive approach [2]. In the same year it obtained the CE mark after five years of three European trials (the Perceval Pilot trial, the Perceval Pivotal trial and the CAVALIER trial). Nowadays, it has been implanted in more than 15.000 patients in over 350 hospitals worldwide.

According to the literature, Perceval valve has been widely used even in off-label indications such as in concomitant mitral valve replacement [3], endocarditis [4], bicuspid aortic valve [5] and aortic regurgitation [6].

However, the advantages of the sutureless device go far beyond the reduction of the CPB time. In vitro analysis and echocardiographic follow-up is demonstrating Perceval’s great effective orifice areas (EOAs) compared to conventional sutured bioprosthesis. Its hemodynamic performance is brilliant, showing how it could be considered a good idea to reduce the risk of patient-prosthesis mismatch (PPM), which still remains an independent predictor of mortality and cardiac events. In fact, procedures like aortic root enlargement, homografts and stent less bioprosthesis are technically complex, require longer learning period and are associated with protracted aortic cross-clamp time. Therefore Perceval could become a possible solution for PPM avoidance [7].

In the past years, a few cases of Perceval degeneration have been reported [8]. Considering Perceval’s large EOA and the reduced PPM when compared to sutured valves, some Authors preferred a less invasive Valve-in-Valve (ViV) approach instead of a reoperation. The group of Fujita et al. first described an algorithm to assess the use of a Transcatheter Heart Valve (THV) into a degenerated sutureless prosthesis and then performed the insertion of a Sapien XT 23 mm in a Perceval M size [9]. Nowadays, Perceval’s 9 years follow-up, its excellent area and performance in small annuli, together with the optimal ViV feasibility could even change the strategy of the prosthesis selection in the younger population.

According to the literature, pacemaker (PM) implantation rate after SU-AVR with Perceval ranges from 3,1% to 28,5% [12,13], however the largest European multicenter study series (Pilot, Pivotal, CAVALIER trials) of 731 patients showed a rate of 7,4% [2]. The exact mechanism of atrioventricular conduction disorders in SU-AVRs with Perceval remains to be clearly elucidated, even if some hypothesis concern the ballon post-dilation and the nitinol stent, similar to those of THV. Despite the surgeons’ learning curve could be an explanation of the slightly higher PM need, these results are comparable to the conventional AVRs with sutured bioprosthesis [14]. Preoperative conduction disorders could also play a role on this outcome [15].

Durability is still another open issue. Even if the manufacturer recommends this bioprosthesis in the young (the cutoff age of 65 years was removed from indications in March 2014), the published studies have a maximum of 10 years follow-up. However, a great expectation is due to the longer follow-up (almost 25 years) of the Sorin Pericarbon Freedom valve, whose biological structure represents the starting point for Perceval own biological component [16].

In conclusion, SU-AVR with the Perceval valve is rapidly developing worldwide, showing good results compared to conventional sutured bioprosthesis. However some issues remains still open, but ongoing and future RCTs will play a pivotal role to fully understand the outcome of this bioprosthesis. While a gradual but constantly higher group of intermediate-low risk patients will be destined to transcatheter procedures, the implantation of an aortic valve without suture will maybe replace the conventional sutured AVR and could represent the future standard of aortic valve surgery. 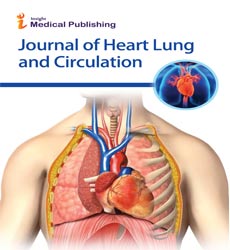