Copyright: © 2019 Mokhtar N, et al. This is an open-access article distributed under the terms of the Creative Commons Attribution License, which permits unrestricted use, distribution and reproduction in any medium, provided the original author and source are credited.

Plasma cell leukemia is an aggressive hematologic malignancy with rapidly progressive course and poor clinical outcome. It requires aggressive induction therapy followed by allogeneic hematopoietic stem cell transplantation in patients who are fit and eligible for this form of therapy. We report a female patient who was diagnosed to have primary plasma cell leukemia in November 2015. Her disease was controlled by a combination of cytotoxic chemotherapy and novel agents. Due to absence of sibling donors for allogeneic transplantation, she received tandem autologous stem cell transplantation followed by 2 cycles of consolidation then continuous maintenance therapy. This line of management has already achieved a durable disease control and hopefully cures of her aggressive plasma cell malignancy.

In November 2015, a 34 year old Saudi female presented to King Fahad Specialist Hospital (KFSH) in Dammam, Saudi Arabia with anorexia, malaise, weight loss, anemic symptoms, and bone pains for 4 months. She gave no history of any medical or surgical illness and she was not on any regular medication. Her physical examination at presentation revealed that the patient was in pain, having pallor and emaciation, but without jaundice, leg edema or external palpable lymphadenopathy. There was dullness on percussion and reduced air entry over the base of the left lung posteriorly. Her abdominal examination showed no tenderness or palpable organomegaly. Her cardiovascular and neurological examinations revealed no abnormality. Her CBC showed: white blood count (WBC): 74.32 × 109/L, hemoglobin: 7.1 g/dL, platelet count: 136 × 109/L. Differential cell count showed: 16% neutrophils, 13% lymphocytes and 1% monocytes in addition to 70% plasma cells. Peripheral blood film showed sheets of plasma cells and mild thrombocytopenia (Figure 1). Her serum creatinine was 157 μmol/L. Hepatic and coagulation profiles were normal. BM examination revealed: 90% cellularity and diffuse infiltration by plasma cells with strongly positive CD138, positive CD38 and lambda light chain restriction (Figure 2). Chromosomal analysis showed complex cytogenetic: (1) monosomies of chromosomes 8, 13 and 14; (2) translocation between the long arm of chromosome 3 at q25 and the distal short arm of chromosome 7 at p14; (3) translocation between the short arm of chromosome 1 at p13 and the distal long arm of chromosome 6 at q21; (3) additional materials of unknown origin on the distal long arms of chromosome 16 at q23 and chromosome 17 at q24. However, fluorescence in situ hybridization revealed negative p53 and ATM genetic mutations. Total protein: 137 g/L, serum calcium: 3.2 mmol/L, serum LDH: 2140 units/L, B2M: 11.1 mg/L and serum IgG: 92 g/L. Serum protein electrophoresis showed a peak in B2 fraction consistent with monoclonal band. Skeletal survey showed diffuse osteopenia and multiple lytic lesions involving the skull and long bones without pathological fractures (Figure 3) and chest X-ray showed bilateral pleural effusions with larger effusion on the left side (Figure 4). Analysis of the pleural fluid showed monoclonal plasma cells reflecting involvement by PCL. 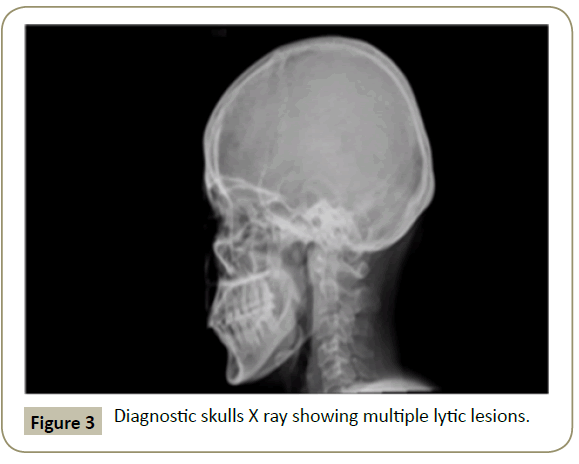 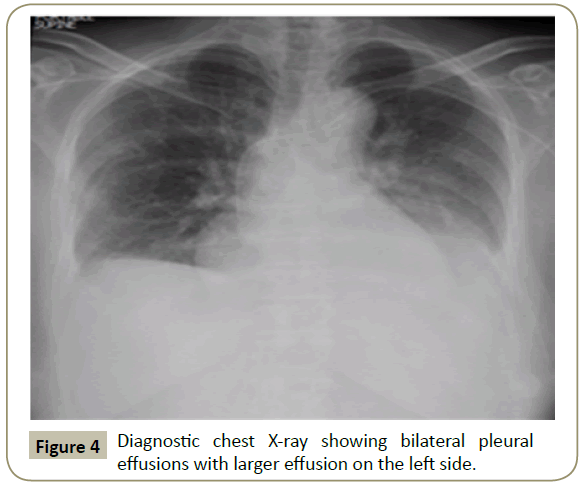 After establishing the diagnosis of primary PCL and controlling her renal dysfunction, anemia, hypercalcemia and bone pains, the patient was commenced on VTD-PACE regimen (a combination of bortezomib, dexamethasone, thalidomide, cisplatin, adriamycin, cyclophosphamide, and etoposide) in addition to monthly doses of zolendronic acid 4 mg intravenously (IV). After receiving 2 cycles of VTD-PACE regimen, she achieved complete remission (CR) of her PCL with no circulating plasma cells, ˂5% plasma cells in the BM, absence of extra medullary disease, and negative immunofixation on serum and urine samples.

As the patient had no siblings for allogeneic hematopoietic stem cell transplantation (HSCT), she was planned for tandem autologous HSCT instead. She received high-dose melphalan 200 mg/m2 IV on 25/01/2016 followed by the first autologous HSCT on 26/01/2016 using non-cryopreserved stem cells and the second autologous HSCT with melphalan conditioning 160 mg/ m2 IV on 01/04/2016 using cryopreserved stem cells. Thereafter, she received 2 cycles of consolidation treatment composed of bortezomib, lenalidomide and dexamethasone (VRD). In August 2016, the patient was commenced on maintenance therapy with bortezomib and dexamethasone. Cycles of maintenance therapy were administered every 2 weeks till September 2018. Thereafter, she was shifted to single agent lenalidomide maintenance.

Throughout her follow-up at the HSCT out-patient clinic, the patient remained very well clinically without any major complication. Re-staging evaluation performed 3 years after the diagnosis of her disease showed evidence of continued CR of PCL (Figures 5 and 6). She was last seen at the transplant clinic in early March 2019. She was asymptomatic; her physical examination revealed no abnormality and her laboratory investigations were within normal limits. She was continued on lenalidomide maintenance and acyclovir prophylaxis and she was given a new follow-up appointment. Primary PCL is distinct clinicopathological entity of plasma cell dyscrasias accounting for 60-70% of all PCLs [16]. Primary PCL does not arise from pre-existing MM and is characterized by an aggressive clinical course [16]. It may represent a valid model of genetic and molecular alterations associated with HR-MM [17,18]. Compared to MM, it shows: more complex and heterogeneous molecular patterns, greater number of genomic alterations and higher incidence of: 13q deletion, 17 p deletion and translocation involving immunoglobulin heavy chain locus as well as lower incidence of hyperdiploidy [18]. New high throughout technologies such as next generation sequencing have allowed: a better understanding of the molecular basis, development of risk stratification and provision of insights into targeted therapeutic strategies for primary PCL [17,18].

Early intensive chemotherapy is recommended as the disease is aggressive and due to difficulty in achieving remission [19]. In the past, the only available therapy for patients with primary PCL was conventional cytotoxic chemotherapy which failed to control the disease leading to dramatically poor outcome [16]. During the last few decades, initially autologous HSCT then novel therapies such as immunomodulatory drugs and proteasome inhibitors, particularly bortezomib, have led to improvement in survival of patients with primary PCL [16]. Several studies have shown that bortezomib given in various combinations with other novel agents such as thalidomide and lenalidomide or conventional chemotherapeutic agents such as doxorubicin, cyclophosphamide, melphalan, vincristine and prednisolone or dexamethasone have improved the outcome of patients with primary PCL [15,16,19,20].

In patients with primary PCL, the long-term survival remains poor despite the availability of novel therapies such as proteasome inhibitors and immunomodulatory agents [21]. Induction therapies with various combinations of novel therapies such as VTD or VRD appear to be superior to the historically used alkylating agents in the treatment of primary PCL [22-24]. In patients with primary PCL, overall survival (OS) with novel therapies has extended to 2.85 years compared to 1.16 years in patients treated with traditional chemotherapy such as VAD regimen (vincristine, doxorubicin and dexamethasone) [25]. Also, recent retrospective studies suggest that the incorporation of novel agents as well as autologous HSCT in the management of primary PCL has improved the median OS to > 24 months [2,12,26].

Studies have shown that: (1) induction with bortezomib containing or lenalidomide-based regimens is highly effective in reducing the rate of early mortality, and (2) consolidation with single or tandem autologous HSCT prolong OS [3,15,16,27,28]. HSCT has increased OS and duration of response by 69% and 88% respectively [24]. Despite the improvement in outcome achieved by autologous HSCT, the results of autologous HSCT in primary PCL are still inferior to those of autologous HSCT in MM [26].

After induction phase of treatment, management of patients with primary PCL should include: tandem autologous HSCT, followed by consolidation therapy and maintenance treatment in all eligible patients [29]. In primary PCL patients, development of complex treatment algorithms that combine intensive chemotherapeutic agents such as cyclophosphamide, doxorubicin and dexamethasone and novel therapies such as bortezomib induction followed by HSCT, autologous or allogeneic then maintenance therapy may ultimately be translated into higher response rates and improved survival [7,16,21,27].

Treatment of relapsed/refractory primary PCL should include combinations of lenalidomide or pomalidomide + dexamethasone + carfilzomib or monoclonal antibodies such as daratumumab or elotuzumab [29]. Large prospective multicenter studies are required to provide: (1) better understanding of the pathogenesis, (2) revised definitions and risk stratification, and (3) specific treatment algorithms that incorporate novel therapies and cytotoxic chemotherapeutic agents, in induction and maintenance phases of treatment, as well as various forms of HSCT in the management of patients with primary PCL [7,27].

The patient presented received 2 cycles of intensive therapy composed of a combination of cytotoxic chemotherapy in addition to novel agents. The VTD-PACE therapy induced CR of her aggressive primary PCL. The patient was a candidate for allogeneic HSCT, but due to unavailability of sibling donors, she was planned for tandem autologous HSCT followed by consolidation and maintenance therapies in order to control her disease optimally. Fortunately, the line of management adopted for this patient ultimately cured her aggressive PCL.

Ideally, patients with PCL should receive aggressive induction therapy followed by allogeneic HSCT in patients who are eligible for this therapeutic modality. In the absence of sibling donors or in case the patient is not a candidate for stem cell allograft, tandem autologous HSCT followed by consolidation treatment then long-term maintenance therapy looks a very valid alternative therapeutic modality that can produce not only durable disease control but also cure.