Appraisal of EBERs, LMP-1 and EBNA-2 on the Prostate Carcinoma as Diagnostic and Originator Markers

Copyright: © 2019 Waheed LAA, et al. This is an open-access article distributed under the terms of the Creative Commons Attribution License, which permits unrestricted use, distribution, and reproduction in any medium, provided the original author and source are credited.

Epstein-Barr virus (EBV) considers the first human virus to be directly implicated in carcinogenesis in different sites of body. Prostate adenocarcinoma is very common in all world. In Iraq, prostate cancer is one of the ten top cancers that affect men. 30 formalin-fixed Paraffin embedded tissue blocks were obtained from prostate carcinoma biopsies and transurethral Resection of Prostate (TURP) and, 30 formalin-fixed, paraffin embedded blocks were obtained from benign prostatic hyperplasia (BPH) collected from archives of laboratory in Ghazi Al-Hariri hospital for surgical specialties and from private histopathology laboratories in Baghdad from May 2016 to December 2016, and 20 control tissue from forensic medicine institute in Baghdad. All samples examination by In situ hybridization (ISH) to detect Epstein-Barr encoded small RNAs (EBERs), then use Immunohistochemistry (IHC) to exam EB nuclear antigen-2(EBNA-2) and Latent membrane protein-1(LMP-1). EBV can be detected by successful method In situ hybridization technique' to exam EBERs in Prostate cancer, which detected only in Prostate carcinoma groups in this study. LMP-1 and EBNA-2, can be detected by Immunohistochemistry method in Prostate carcinoma with highly percentage than benign prostate hyperplasia and control group. Finally, there is a correlation between EBERs, LMP-1 and EBNA-2 in malignant group.

Epstein-Barr virus (EBV) (type 4 human herpes), it is well known cause of many diseases, like infectious mononucleosis, multiple sclerosis and cancerous diseases [1].

There are two types of EBV infections including either lytic or latent. The former include replication of virus genome and protein transcription while in latent infection there is only limited genes expression which include two genes EBVencoded RNAs (EBER-1 and -2), 6 EBV nuclear antigens(EBNA-1,-2,-3A,-3B,-3C and LP), and 3 latent membrane proteins(LMP-1,-2A,-2B) [2].

EBV-encoded RNA 1 (EBER1) and EBER2 are translated RNAs are the most numerous viral transcripts in latent cells infected with EBV, which play a great role in the effective growth transformation of primary EBV-induced B cells.

The LMPs i.e. (LMP1, LMP2A and LMP2B) play a role in the immortalization operation and oncoprotein.

EBNA1 can be detected in all EBV-associated malignancies while EBNA1 is very stable and contains a glycine-alanine repeat sequence near its N-terminus that inhibits translation and subsequent self-replication.

The prostate is a small organ, presents in the male only and situated below the bladder and surrounds the urethra, its main function is to provide the semen with fluid.

There are many risks factors for prostate cancer (PCa) (similar to those of benign prostatic hyperplasia (BPH) include old age, family history, racial factor, diet, hormones and occupational hazard [3]. The cancer aroused at peripheral zone of gland. Unlike BPH the obstruction of urine flow is less common in cancer and only can be seen in late stage of disease.

A retrospective study was conducted on the following main groups during the period from May 2016 to December 2016.

The age of the patients ranged between 40-80 years, and the samples were collected from archives of laboratory in Ghazi Al-Hariri hospital for surgical specialties and from private histopathology laboratories in Baghdad.

In situ hybridization for detection of EBV by EBERs

Principle of the test: The presence of certain nucleic acid sequences in cells or tissue can be detected with in situ hybridization using labeled RNA Probes. The hybridization results in duplex formation of sequences present in the test object and the specific gene probe. It is indirectly detected using an enzyme-conjugated antibody targeting the tags: the enzymatic reaction of chromogenic substrates leads to the formation of a color precipitate that is visualized by light microscopy at 10-20X (strong blue–violet signals). Slides preparation: Serial thin sectioning of (4 μm) thickness was done for each paraffin-embedded tissue block and sticking the sections on charged slides.

The results of the study under application of the statistical package (SPSS) ver. (14.0).

The results of ISH for detection EBV-EBERs in study group tissues were shown in Table 1 and Figure 1. The percentage of EBV results in the total group of Benign and control groups have no responding, while malignant group have high responding 13 out of 30 were positive (43.3%). Comparison significant (C.S.) between control groups and malignant group have highly significant value (HS) (p=0.001), and (HS) (p=0.000) association between malignant and benign groups, therefore studied EBERs parameter seems to be good indicator for characterized differences between study groups. 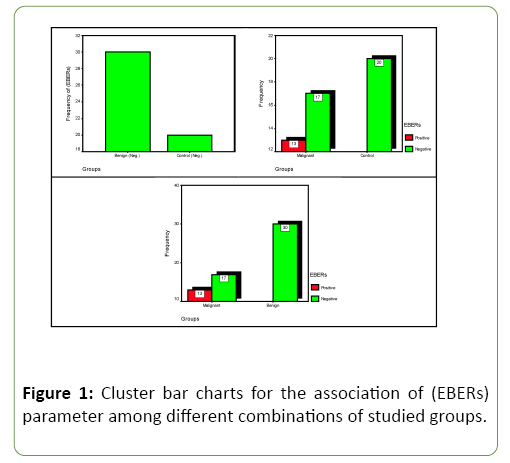 Figure 1: Cluster bar charts for the association of (EBERs) parameter among different combinations of studied groups.

Table 1: Distribution of the studied (EBERs) parameter responding according to different combination's groups with comparisons significant.

Results obtained are nearly compatible to Saul Grinstein et al. study which showed strong EBV reactions in 36.8% of neoplastic nuclei from Seven out of 19PCa when exam by (ISH) method.

On other hand Mohammed Ali and Mohammed study [5] found that 19 of 40 (47.5%) PCa cases positive to EBERs when detection by ISH, while only 2 of 20 (10%) from BPH and not found in control group, that's mean this result agree with current study and have the same highly significant P value between malignant group and both BPH and control groups.

The percentage of EBV-RNA in PCa was found to be higher when comparison to the benign and control group reflects a possible role of the EBV-infection in the carcinogenesis of PCa. 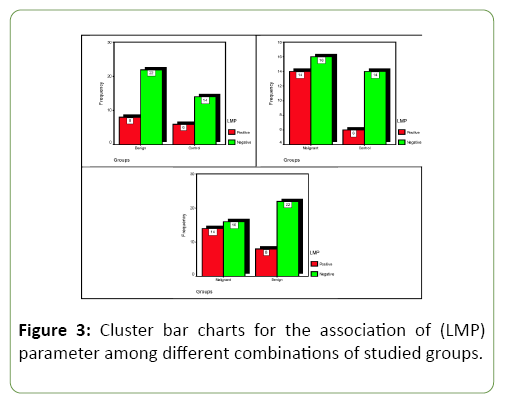 Figure 3: Cluster bar charts for the association of (LMP) parameter among different combinations of studied groups.

Table 2: Distribution of the studied (LMP) parameter responding according to different combination's groups with comparisons significant.

But odds ratio shows that twice and half time a positive outcomes concerning Malignant group are recorded in more cases toward Benign group, and therefore studied LMP seems to be somewhat good indicator for characterized differences among (Control, and Benign) in contrast of Malignant group.

No other study was found which mentioned the association between LMP-1 and prostate pathology.

However, both of prostate and breast tissue are glandular and productive tissue [6] (thus we can compare between these tissues, so Tseng et al., study which used PCR and (IHC) staining for LMP-1 protein detection was found 9 out of 20 Breast cancer (BC) (45%) were positive, this is the first study suggesting a role for EBV in the pathogenesis of fibro adenomas in the immunosuppressed patients specific localized to epithelial cells [7].

Table 3 and Figure 5 show association of "EBNA-2" parameter responding with different of combination's groups regarding the seven out of 30(23.3%)from benign group, 6 out of 20(30%) from control group, and 12 out of 30(40%)from malignant group that showed positive IHC reactions for EBNA-2 marker. Statistically, no significant differences (p>0.05) were found between three studied groups. 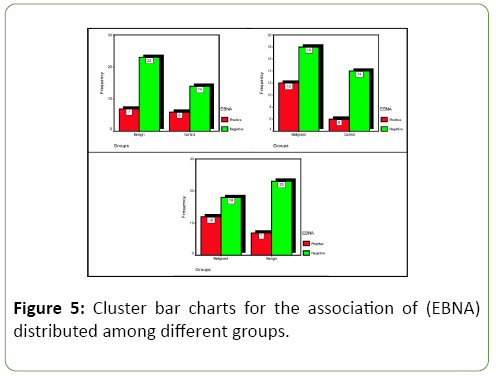 Figure 5: Cluster bar charts for the association of (EBNA) distributed among different groups.

Table 3: Distribution of the studied (EBNA) parameter responding according to different combination's groups with comparisons significant.

On reference to subject (Benign, and Malignant) combination, EBNA-2, and rather than no significant relationship at P>0.05 are recorded, but according to calculated P-value=0.165), it's more informative for that result to be reported, rather than simply stating that statistical significant was not achieved [8].

In addition to that, an odds ratio shows that more than twice time a positive outcomes concerning Malignant group are recorded in more cases toward Benign group, and therefore studied EBNA-2 seems to be somewhat good indicator for characterized differences among (Control, and Benign) in contrast of Malignant group. Unfortunately, no any other study was found in light of studied subject, but this study bind between both HPV type 18 and EBV gene (EBNA1) were obtained high and equal proportion of normal, benign, and PCa specimens [9] that’s mean not compatible with this study. But the frequency of co-infection of EBV and HPV was significantly higher in PCa (55%) than in benign (15%) and normal prostate (30%) specimens which are compatible with these results.

In addition, evidence of experiments shows that HPV and EBV work together to enhance the proliferation of cultured cervical cells [10], suggesting that may be have the same role in prostate epithelial cells [11]. Indian study was found IHC for EBNA-1 was positive in 28out of 51 malignant breast cases (54.9%) and benign breast patients also have a higher immunological response against EBNA-1, while all control group (30) was negative [12]. Indian study was compatible with this study in malignant group only which have high percentage of EBNA-1 positive reaction.

Correlation between EBERs and other markers in malignant group

Table 4 shows significant relationship are accounted at P=0.030 between EBERs and LMP in malignant group, no other study to PCa compatible with this study but Plaza G study was detected EBERs by ISH in 96.67% of the Nasopharyngeal cancer (NPC) cases, and detected expression of LMP-I in 43.33% of the NPC cases [13]. These results compatible with current study.

On other hand, Jiang Li study was determined EBERs in 56(100%) by ISH in NPC, and LMP-1 in 24(43%) out of 56 [14]. While Jian-Yong Shao et al. study was reported: In the nuclei of the tumor cells from 87 NPC biopsies (100%) when used ISH method was detected EBERs while LMP1 in 55 from the same biopsies (63%) which appear as a dot-like cell membrane and or cytoplasmic staining signals [15]. While accounted P=0.035 between EBERs and EBNA.No any previous study mentioned this relation with current study but Mohamad Nidal Khabaz study which compatible with this study, from 92 breast carcinoma(BC) biopsies was detected 24(26%) which infected with EBV while only 3 from 49 control group biopsies with represented a statistically significant difference (p-value using χ2=0.008). These results found an association between EBV infection and BC development [16].

These studies suggest EBV might act as a promoter for the development of BC and it might contribute to increased tumor aggressiveness in epithelial cell carcinoma.

Correlation between EBERs, LMP-1 and EBNA-2 in malignant group

Figure 7 shows the distribution of EBERs, LMP-1 and EBNA-2, seven (23.3%) out of 30 samples were found positive of these markers (red area). Unfortunately, no study was found related to this subject. Figure 7: The distribution of EBERs, LMP-1 and EBNA-2.Blue: No stain, Red: Positive.

This study was found that:

• LMP-1 and EBNA-2, can detect by Immunohistochemistry method in Prostate carcinoma with highly percentage than benign prostate hyperplasia and control group.

• There is a correlation between EBERs, LMP-1 and EBNA-2 in malignant group.

The authors are grateful to laboratory staff in Ghazi Al-Hariri hospital for surgical specialties, private histopathology laboratories in Baghdad and center of blood diseases.