Determination of Paraquat after Adsorption by two Tropical Soils: A Voltammetric Study Based on Nafion Coated Glassy Carbon Electrode.

The use of pesticides constitutes the most cost-effective means of pest and weed control. Despite the importance of this use, these compounds pose a toxicological threat to both humans and the three parts of the environment formed by air, water bodies and soils. The monitoring of pesticides constitutes a daily concern, for researchers in both environment protection and analytical chemistry. This study was devoted to the elaboration of an electrochemical sensor based on a glassy carbon electrode (GCE) chemically modified by a thin film of nafion. It was developed and used to assess the sorption of a world-wide used herbicide, paraquat (PQ) by soils. The redox behavior of PQ was first examined by cyclic voltammetry using the sensor. Afterwards, an electroanalytical procedure for the determination of residues of PQ was developed by square wave voltammetry (SWV). Some parameters of the electrochemical process such as the supporting electrolyte, the concentration of nafion on the electrode response, the pH of supporting electrolyte (0.01 mol/L Na2SO4) and the accumulation time were studied. Upon optimization, a linear relationship was found between the peak current and the concentration of PQ in the range of 2 x 10-9 to 6.4 x 10-8 mol/L, with a detection limit of 0.4 ppb (1.8 × 10−9 mol/L). The developed procedure was then successfully applied to the determination of PQ adsorbed by two tropical soil samples with satisfactory results. 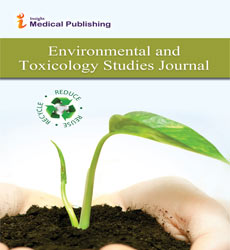