Boronizing has been employed to increase the service life of parts such as orifices, ingot molds and dies for hot forming made of AISI H13steel. In this study, pack boronizing was done of AISI H13 Steel. Samples were boronized at 950°C for 0.5 hr, 1 hr and 4 hr. In all the specimens both the iron boride layers (FeB, Fe2B) were formed. It was seen that as soaking time increases, thickness of boride depth also increases. Continuous decrease in the hardness from surface to unboronized layer was observed. Boronized specimen at 950°C for 4 hr showed better hardness and so was studied for further investigation. This study was compared with Nitrocarburized cycle at 550°C for 12 hr. High wear resistance was observed in the boronized specimen than in nitrocarburized sample. COF was ranging from 0.40 to 0.70.

Pack-boronizing provides specific advantages over other techniques like, easy and less handling equipments, possibility of changing composition of boronizing powder mixture and low cost of the process. Boronizing is a thermo-chemical surface treatment process that involves diffusion of boron atoms into the surface of metal/alloy to produce a layer of borides of the corresponding metal/alloying elements [1-3]. The major advantages of surface treatment by boronizing are its ability to impart high hardness (between 1450 and 5000 HV), low surface coefficient of friction (COF), excellent abrasion and wear resistance and oxidation resistance compared with other similar treatment [2,4]. Tool steels, particularly the H type, are commonly used in many industrial applications. The process involves heating well-cleaned material in the range of 700 to 1000°C, preferably for 1 to 12 hr, in contact with a boronaceous solid powder (boronizing compound), paste, liquid or gaseous medium. Generally, the commercial boronizing mixture is composed of boron carbide (B4C) as donor, KBF4 as an activator and silicon carbide (SiC) as a diluent to control the boriding potential of the medium. Components are packed in the container with above mixture and heated in the boronizing temperature range for specific time to form borides on the steel surface followed by cooling in air [5]. Diffusion of boron into the surface of metals and alloys forms metallic borides, such as FeB and Fe2B, depending on process temperature, chemical composition of substrate materials, boron potential of the medium and boriding time. The thickness of compound layers consisting of FeB and Fe2B boride can reach up to 60-100 μm. The morphology of the boride layer is influenced by the presence of alloying elements in the matrix. Formation of either single phase or two phase layer depends upon the availability of boron (boron potential) in the boronizing media, process temperature and time. Boron-rich FeB phase with 16.23 wt.% boron has orthorhombic crystal structure while monophase Fe2B has body central tetragonal structure with 8.83 weight% boron. FeB is more brittle compared to Fe2B [5-7], and Fe2B is more desirable than FeB. Crack formation is generally observed at the interface of FeB/Fe2B due to the difference in their crystal structures and coefficient of thermal expansion. Owing to the high alloying of tool steels, other elements also can easily form the borides in the layers, especially Cr, if the alloy contains sufficiently high amount of chromium [8-10]. The current study focuses on boronizing of AISI H13 steel for die insert application to improve wear resistance and performance evaluation with existing nitro-carburized die insert.

Four disc shaped specimens with dimensions of 20 mm (diameter) X 5mm (thickness) were prepared. The specimens were cleaned with soap solution and then with acetone solution. Specimens were etched by using 2% Nital.

Mild-steel container was designed for boronizing treatment. The container was cylindrical-shaped with dimensions (diameter X height X thickness) of 100 mm × 150 mm × 5 mm. During the experiment, oxidation and descaling of the container wall was observed.

For each treatment (i.e., nitrocarburizing and boronizing), three pins were made for each load and the arithmetic average of their results was reported. Wear testing parameters are shown in Table 2.

Figure 1 shows the SEM image of the specimen boronized at 950°C for 0.5 hr, 1 hr, 4 hr and nitrocarburized sample. At boronizing temperature, there is formation of potassium trifluoride (BF3) gas from KBF4 activator and this gas reacts with boron yielding substance B4C, to generate boronizing atmosphere. Concentration of free boron in this layer determines the growth of iron borides, that is, the growth of Fe2B layer or FeB plus Fe2B layers. Boride layers FeB and Fe2B were formed in all the three boronized specimens.

FeB layer forms over Fe2B layer. Contrast between FeB and Fe2B layer is visible in the optical micrograph (FeB layer appears darker than Fe2B layer). FeB, being undesirable, is formed due to incomplete soaking time and unavailability of boron.

In the figure, three distinct regions are observed (i) Boride layer including borides, (ii) Transition zone relatively softer than substrate, (iii) matrix that is not affected by boron. Thickness of the boronized layer formed on the surface of steel specimens that are boronized at 950°C is ranging from 15 to 90 μm and thickness of nitrocarburized layer is 200 μm.

Growth of boride layer depends upon the availability of boron potential, temperature and time. Diffusion controlled boride layer growth is given by:

Where, d is boride layer thickness,

k is constant which depends upon temperature.

If the elements such as carbon, silicon, and aluminum are present in steel, the formation of transition zone occurs below the Fe2B layer. These elements are not soluble in the iron boride layer. They are pushed from the surface by diffusing boron and displaced ahead of the boride layer into the steel matrix. The displaced elements can form a complex compound iron-silicoborides. As the time progresses, nucleation of FeB phase occurs near the surface region of Fe2B layer and then the transition zone is eaten up by the growing front of Fe2B layer. Microhardness-depth profiles across the cross section of steels specimen boronized at 950°C for 4 hr and nitrocarburized sample are shown in Figure 2. In the current work, microhardness of specimen 950°C for 4 is around 1600-1700 HV0.1 in the boride layer zone and that of in transition zone is around 400 HV0.1. The hardness in the non boronized region is around 500 HV0.1. The nitrocarburized steel showed hardness of 800 HV When compared boronized samples with Nitrocarburized samples; the hardness is much higher in the boronized sample. This hardness can be retained at higher temperatures too. Figure 2: Microhardness graph of boronized specimen 950°C for 4 hr and nitrocarburized sample at 550°C for 12 hr. Figure 3: Graph against Wear v/s Distance in the boronized and nitrocarburized sample and two different loads. From these results, it is confirmed that wear resistance increases with increasing surface hardness of the steel. From Figure 5, we conclude that an increase in process time increases the thickness of the boride layer, which results in a decrease in wear [5,8,10,11]. When COF values are compared, it is almost same for nitrocarburized and boronized sample. Boronized pin shows 0.40 as COF whereas nitrocarburized pins shows COF from 0.40 to 0.90. The COF remains almost constant for both the specimens. It is ranging from 0.40 to 0.70. 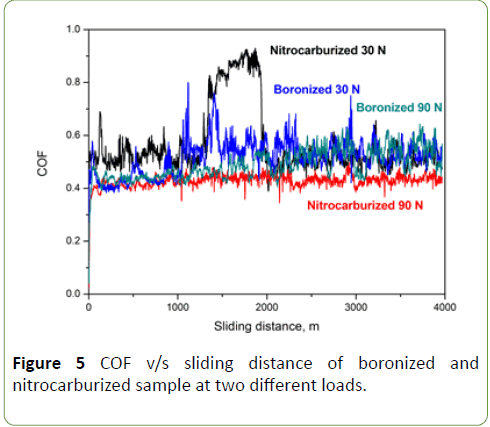 In case of the boronized pin, COF value remained 0.40 to 0.50, but during the 1000-2000 m sliding distance, COF suddenly increases to 0.80 and drop again to 0.55 and thereafter remains constant. This increase in COF could be due to either wear particle entrapment or asperity flattening. Wear particle generation or asperity flattening must be associated with the disc and not the pin because pin shows polishing wear, and there is no indication of particle removal from the pin surface.

When the above results are taken into consideration, the following conclusions can be derived:

• The surface hardness of the boronized AISI H13 steel was in the range of 1600-1700 HV, the nitrocarburized steel showed hardness of 800 HV while unborided steel hardness was 500 HV.

• High hardness of the surface of boronized steel is responsible for the enhanced wear resistance at 300°C.

• Average COF observed for boronized and nitro-carburized was in the range of 0.4-0.7.

The authors gratefully acknowledge the fully support provided for this work by KCTI, Bharat Forge Ltd. Pune. Finally, the authors would like to express special thanks and gratitude to review committee and top management of Bharat Forge Ltd for providing helpful material and comments as well as granting the permission to publish/present the research work.