Copyright: © 2017 Hamad SH, et al. This is an open-access article distributed under the terms of the Creative Commons Attribution License, which permits unrestricted use, distribution, and reproduction in any medium, provided the original author and source are credited.

Objectives: This study aims to understand the importance of the glycated hemoglobin (HbA1c ) levels and umbilical cord components in prediction of fetal macrosomia.

Fetal macrosomia is a risk factor for delivery complications for mothers and newborns [1]. It is associated with the gestational diabetes, but can occur in other pregnancies. About 2-9% of all pregnant women are diagnosed with gestational diabetes [2]. The American College of Obstetricians and Gynecologists (ACOG) defines macrosomia as a birth weight that is >4,000 g irrespective of gestational age, or >90th percentile for gestational age after correcting for neonatal sex and ethnicity [3]. Health professionals have used ultrasound-derived estimated fetal weight and glycated hemoglobin (HbA1c ) levels to predict the risk of macrosomia during pregnancy [4]. However, these findings still have not received a consensus agreement on the accuracy of both approaches. Additionally, professional groups disagree on whether to recommend routine screening, selective screening based on risk factors for gestational diabetes, or no screening [2,5,6]. Given the serious problems that might be associated with delivery of the macrocosmic fetus, identification of at risk fetuses and treatment of gestational diabetes to control the maternal glucose levels are both important risk-reduction strategies.

Sonographic prediction of fetal weight in large for gestational age fetuses based on weight estimation equations is associated with overestimation and the reliability of these methods, has been questioned by some authors [7,8]. Studies have shown that the use of umbilical cord components and glycated hemoglobin (HbA1c) levels can give more accurate results to predict macrosomia [4] while others showed that HbA1c levels cannot be used to predict macrosomia [9]. Study the agreement of both approaches is important to predict macrosomia. Therefore, we aimed to understand the importance of measuring HbA1c along with umbilical cord components by sonographic examination in prediction of macrosomia in women with gestation diabetes mellitus.

The gestational age was calculated based on the last menstrual period and confirmed measurement of grown–rump length and second trimester ultrasound at <20 weeks. Pregnant women with rupture membrane, and multiple pregnancies, medical disorders (e.g. Renal, cardiovascular diseases, pulmonary diseases or/and hypertension), Polyhydramnios or oligohydramnios, Intrauterine growth retardation, placenta previa and abruption, fetal congenital abnormality or smoker, were all excluded from this study. Verbal consent was obtained from each woman before the examination. A complete evaluation for each pregnant woman was done including detailed history of age, gravidity, parity, history of previous diabetes mellitus, hypertension or any medical diseases and a previous delivery of large baby. The diagnosis of gestational diabetes was depending on the Oral Glucose Tolerance Test (the American Diabetes Association criteria). HbA1c levels were measured for all both groups (study and control). The study protocol was approved by Obstetrics and Gynecology committee of Arabic Board for medical specialization and the hospital administration.

Hemoglobin A1c is defined as the hemoglobin that is irreversibly glycated at one or both N-terminal valines of the beta chains [10,11]. 3 ml of venous blood samples were collected from each women, placed in anti- coagulant tube (tubes with EDTA). Immunoturbidimetric method (standardized by DCCT: Diabetes Control and Complications Trial and certificate by NGSP: National Glycohemoglobin Standardization Program) [12] was used to determine total hemoglobin calorimetrically using alkaline hematin.

Regression model embedded in Microsoft Excel 2010 was used to compare the results of umbilical cord components and the levels of HbA1c in diabetic pregnant women with those in non-diabetic women. Results are considered to be statistically significant if p-value is less than 0.05. HbA1c levels are presented in Table 3. Results show that 11 of 45 diabetic women had HbA1c higher than 45 mmol/mol; five women had an HbA1c between 30 mmol/mol and 45 mmol/mol; and 29 women had HbA1c that is lower than 30 mmol/mol. Additionally, HbA1c levels were related with the weight of the fetus. Table 3 show that 16 of 45 (36%) of diabetic women had macrosomic fetuses; and 11 of them (69%) had HbA1c that is higher than 45 mmol/mol. In the control group (non-diabetic pregnant women), there has been 12 of 45 (27%) of the cases that had constitutionally macrosomic fetuses. 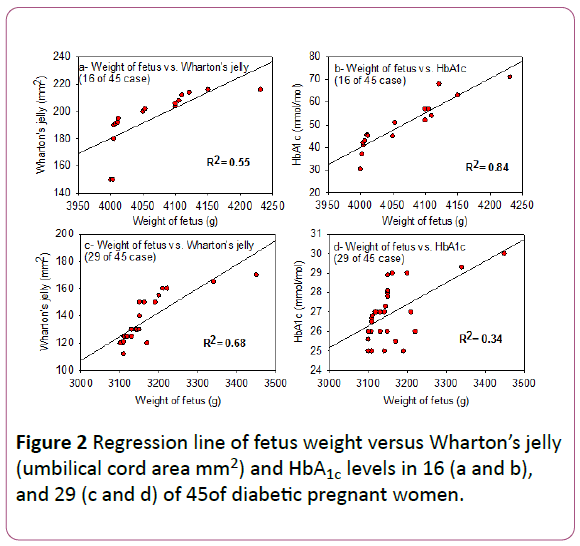 Figure 2: Regression line of fetus weight versus Wharton’s jelly (umbilical cord area mm2) and HbA1c levels in 16 (a and b), and 29 (c and d) of 45of diabetic pregnant women.

Infant macrosomia was a mediating factor in high cesarean delivery rate for women with diabetes. This study shows that 16 of 45 diabetic women delivered macrosomic infants. Additionally, 12 of 45 cases in the control group (women with no diabetes mellitus) delivered constitutionally macrosomic infants. Cesarean section rate in diabetic women was higher than that for the control group (32(71%) versus 14(31%)); these results agreed with what has been published before [14].

Our results show that the infant of diabetic mother has large umbilical cord area due to a large amount of Wharton's jelly. This might differentiate between the appropriate-forgestational- age fetus from a normal pregnancy and that from a pregnancy in a mother with gestational diabetes, and between the macrosomic fetus of a diabetic pregnancy from the genetically large fetus [15].

Authors would like to thank the staff of clinical biochemistry department at AL-Yarmouk Hospital for their help in HbA1c analysis.