Objective: Goats are a great resource in developing countries where they serve as a source of food, milk, hides and as a wealth repository. Wounds affect the quality of hides that can be obtained from goats and an understanding of the contraction rates of wounds on different parts of the body may aid in treatment of wounds.

Methods: Ten male and female goats were acquired and stabilized for this study. They were aged between 1-1.5 years and weighed between 10-12 kg. Three full thicknesses 1 cm by 1 cm epidermal wounds were created on the head, trunk and leg of each goat and monitored by measuring the rate of contraction on a daily basis. The measurements for days 0, 5, 10, 15, 20, 25, 30 and 35 were recorded.

Wound healing occurs in four overlapping phases; hemostasis, inflammation, proliferation, and tissue remodeling or resolution [1]. A failure of any aspect of these phases will lead to delayed or chronic wounds [2]. There are several factors which affect wound healing and they may be local in which case they influence the wound characteristics or systemic in which case they affect the overall state of health of the individual. Wound healing is a survival mechanism and represents an attempt to maintain the normal structure and function. The capacity of a wound to heal depends partly on its depth, overall health and nutritional status of the individual [3]. Normal wound healing is a dynamic and complex process having a series of coordinated events. These include bleeding, coagulation, acute inflammatory response, regeneration, migration and proliferation of connective tissue and parenchyma cells; synthesis of extracellular matrix proteins, remodeling of new parenchyma, connective tissue and collagen deposition. Increasing the wound strength occurs in an ordered manner and results in the repair of severed tissues [4-6]. The goat is a member of the family Bovidae and is closely related to the sheep as both are in the subfamily Caprinae. There are over 300 distinct breeds of goat. Goats are one of the oldest domesticated species, and have been used for their milk, meat, hair, and skins over much of the world. Goats are hardy and are an important resource in the attainment of food sufficiency goals in Africa. The rates at which wounds heal determine the health status of these goats and the quality of hides that can be obtained from them. While information is available about the influence of body parts on wound contraction rates in humans, there are no resources on the rate of wound healing with regards to different areas of the body in goats. As different areas of the body have differences in blood supply and exposure to agents that may enhance or retard healing, it is imperative to determine wound healing rates in goats. This study was designed to determine the rate of differential wound healing in different parts of the body of the West African Dwarf goat.

Ten adult goats comprising five male and five female aged between one and one and a half years and weighing between 10-12 kg were acquired from a reputable goat herd and kept randomly in pens three weeks prior to commencement of the study. They were fed concentrate, grass and cassava peels and given free access to water. They were also dewormed using Albendazol at 1 ml/5 kg dose rate.

Following 3 mg/kg of 2% lignocaine used in caudal epidural block and local infiltration to desensitize the skin and provide the required anesthesia, a square stencil of dimension 1 cm by 1 cm, was used to mark using an ink marker the portion of the epidermis to be surgically removed (Figure 1). Booster injections of up to one-half of the initial dose were administered as needed in order to ensure that the goats were pain-free during the skin excision procedure. Each marked portion was blocked using paravertebral block using the T13, L1 and L2 block to cause desensitization of the flank region using 2% lignocaine with adrenaline before wound creation. For the wounds created on the head and the leg, local infiltration of the proposed wound creation site was done with 2% lignocaine and adrenaline. To test for desensitization, pin pricks were used. Non response indicated complete desensitization before wound creation was carried out. Epidermal wounds were created on the head, trunk, and leg of all the goats. A sharp sterile scalpel was used for wound creation. 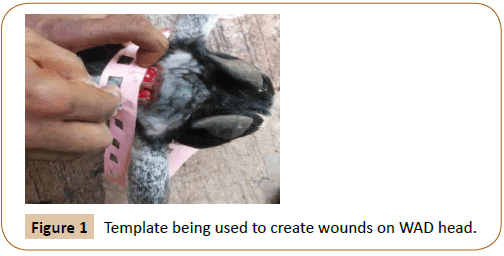 Figure 1: Template being used to create wounds on WAD head.

The template was used three times to delineate three wounds. The first most cranial one was dedicated for clinical observation of the contraction, while the second and third was dedicated for biopsy collection on each part of the head (Figure 1), trunk (Figure 2) and leg (Figure 3). The full thickness of the skin within the incision was then carefully stripped away by sharp dissection from its underlying muscle. All excisions were made using a scalpel blade and forceps; with particular care taken that wound edges were sharply defined.

Each wound was measured in cm daily using the length of the midhorizontal and mid-vertical sides of the wound with the use of a Vernier caliper (Figure 4). Error due to parallax was reduced by ensuring that wounds were measured under adequate illumination and the same person measured it. The length and breadth were then used to calculate the wound area in cm2 (Figure 5).

Data obtained during the experiment were subjected to student T-test and ANOVA. All data processing, charts and analysis were carried out using SPSS version 15 and Microsoft Office Excel 2010 (Microsoft Corporation).

In the male goat, throughout the course of healing, the trunk showed the most contraction followed by the head and the least being the leg. There was significant difference (P<0.05) in healing between the head, trunk and leg in the maturation phase between days 25-30 (Figure 6). It is therefore safe to suggest that the trunk healed most rapidly followed by the head and then the leg. Healing was completed on day 35. 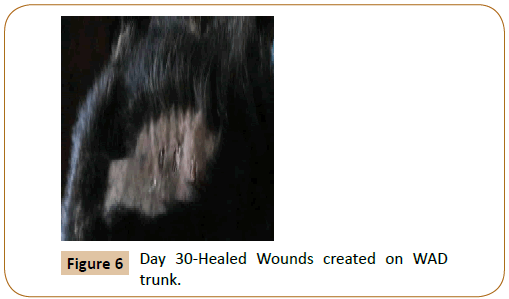 In the female goat, throughout the course of healing, the trunk showed the most contraction followed by the head and the least being the leg. There was significant difference (P<0.05) in healing between the head, trunk and leg in the proliferative and maturation phase between days 10-30 (Figure 7). It is therefore safe to suggest that the trunk healed most rapidly followed by the head and then the leg. Healing was completed on day 30. 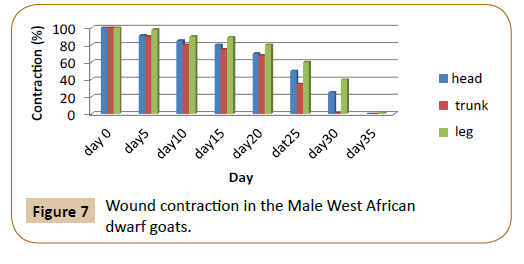 It is pertinent to note that the healing patterns of the head, trunk and leg in male and female goats showed similar patterns (Figure 8). However, it is important to note the anatomical peculiarities of these three parts of the body. The leg is less fleshy and poorly vascularized than the trunk and the head which may lead to poor angiogenic response during wound healing. In the same vein, the trunk is more vascularized and fleshy than the head and is expected to heal faster than the head. The observed pattern of healing on the three parts of the body under this study is better explained in this manner. Also, angiogenic activities were also better based on the histo pathological samples obtained from these three sites showed that inflammatory stage did not prolong unnecessarily in the head and trunk while the leg had a prolonged inflammatory phase because of poor angiogenic activities and increased macrophage activities which might have resulted from infectious contamination due to proximity to the floor where there is abundance of microbial agents. Though it was observed that the patterns of healing were similar in the male and female goats in this study but females had faster healing rates than the males. Female estrogens (estrone and 17 β-estradiol), male androgens (testosterone and 5 α-dihydrotestosterone, DHT), and their steroid precursor dehydroepiandrosterone (DHEA) appear to have significant effects on the wound-healing process [7]. It was revealed that the differences in gene expression between elderly male and young wounds are almost exclusively estrogenregulated [8]. 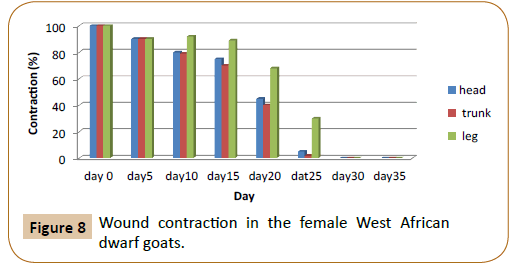 Hormones exert clear and substantial effects on wound healing. Arguably, estrogen is the most important hormone to regulate skin homeostasis and has clear implications for wound healing such as venous ulcers, without the detrimental effects of systemic estrogen treatment on other physiological processes. Estrogens accelerate wound healing and dampen the local inflammatory response [9,10]. The regulatory roles of androgens are less well characterized. It has been shown that blocking the conversion of testosterone to DHT accelerates healing and reduces wound IL-6 levels, suggesting that the negative effects of testosterone are through its metabolism to DHT.

The wounds on the trunk and head healed faster than those on the thigh/leg because:

• The circulation to the limb is poor, the trunk and head have better blood supply,

• Of constant or regular joint movement in the limb,

• There’s minimal soft tissue between skin and bone of the limb,

• The limb has greater risk of contamination as it is closest to the ground and animal makes contact with the ground through the limb when lying down.

Finally, the pattern of wound healing on these three parts of the body namely the head, trunk and legs is similar in both male and female WAD goats except that the female goats healed faster similar to observations of other workers.