The main purpose of this research is analyzing the effect of creatine supplementation combined with aerobic training on anaerobic threshold in young men. The following study is a quasi-experimental study. The population of this study is formed by young healthy men of Shahrood city who do recreational activities. The primarily samples were volunteer selected. A group of 32 young healthy men (between the ages of 18 to 30) agreed to participate in this research. The study was done in 4 weeks and the data needed for a four-week-course was collected before and after the test. The statistical analysis was performed by “SPSS ver.16”. To analyze the data, ANOVA variance test was used. The results showed that using creatine over the course of four weeks, along with aerobic exercise, has affected anaerobic threshold (p=0.02The researcher concluded that creatin supplementation can be effected on anaerobic threshold, But more studies for longer periods (over 4 weeks) are necessary.

Today using a variety of sports science with a purpose of making proper use of nutritional and dietary supplements is one of the vital factors of modern sports. Therefore, most of the professional athletes use these substances to get the most out of their performance [1]. Creatine is a well-known substance among athletes as an ergogenic supplement. Creatine is a natural element in our diet; which is also synthesized in the body by liver. Creatine makes the muscles loaded by creatine and also increases its total supplies in the forms of phosphor and free (also called creatine and creatine phosphate). Theoretically, this leads to an increased capability of producing energy during an intense exercise and also an increased ability to reset body to the initial status after the exercise [2]. Hoffman et al (2005), observed that using creatine supplements for 6 days led to postponement of fatigue in the Wingate anaerobic power test compared to the placebo [3]. The Ernest et al study was done in 4 days with both identical and placebo groups in which they were prescribed 20 grams of creatine a day. The exercise test consisted of three thirty-second- Wingate test on an ergometer bicycle with five minutes of resting between each test. The maximum anaerobic ability was measured by the maximum output of power in a five-second-period and the anaerobic capability as the total work done, was measured in thirty seconds. The maximum ability was not affected by the treatment. The anaerobic capability was increased in the three tests after using the supplements but no difference was observed in the placebo group [4]. Branch’s Meta analyze study (2003) showed that 30 studies have indicated the desirable effect of using creatine in less-than-thirty-seconds activities which is probably the result of the improvement of the ATP-PC system [5].

After getting written testimonial from the volunteers, to confirm their health, they were under medical observations. The volunteers who had a record of cardiovascular diseases, diabetes, thyroid diseases, or any known diseases, or any type of diets, were out of the research. Addiction to any drugs, cigarettes, alcohol and caffeine also were the reasons that led to exiting some of the volunteers. The final group of study was chosen via daily activity questionnaire. The sample of this research included 32 young healthy men (ages 18 to 30) with athletic activities who were interested in cooperating in this study. Samples that used creatine in last 6 months were out of the research.

The samples were divided in four groups of control (n=8), creatine (n=8), Practice (n=8) and practice + creatine through “double blind and randomized manner”. The practice group are using 20 grams of creatine on daily basis (four 5gr sets) in the first week of study and in the remaining 21 days, 10 grams on daily basis (two 5gr sets). The time for using these dozes is during the daylight. The control group uses the placebo in the same routine.

The study was done in four weeks and the needed information for a four-week period was collected via before and after test. All the data was collected in special hours of the day. The ventilatory and cardiovascular evaluation was done in following manner. It was requested from the samples to avoid intense activity 48 hours before the test. The ventilator ability was evaluated via calculating the ventilator anaerobic threshold and the maximum used oxygen. For that, the samples participated in an additive work out until the failure on an ergo meter bicycle. 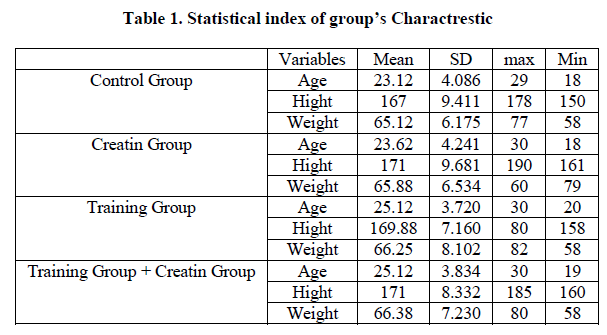 The results of table 3 showed that using creatine over the course of four weeks, along with aerobic training, has affected anaerobic threshold (p=0.02).

Scientific facts show that using creatine delays the fatigue resulted by short intense exercises and also leads to increasing the muscular creatine by 40 to 42 percent, increasing the skeleton muscular mass, reducing the recovery time between the trainings and increasing the performance level. Increasing the stored phosphagen leads to increasing the ability to recreate creatine phospho (CP) and via that, benefits the person in intense short time activities (like lifting or running…). Therefore creatine phospho can play a major role in supplying the necessary energy for short and intense exercises. The results of this study indicated the same results of Ernest et al study (1994), the analysis study of Branch (2003), and Hoffman et al (2005).