Treatment and outcomes: Surgical removal of the masses applied under epidural anesthesia was performed. The masses were firm and pigmented. Multiple biopsies of the masses were collected and fixed in 10% neutral buffered formalin. Histopathologic evaluation of the biopsies revealed malignant dermal melanoma involving deep dermis, muscles, adipose tissue, lymph node and blood vessels. Multifocal areas of necrosis and dystrophic calcification were recognized. Hematologic and plasma biochemical parameters were within normal reference ranges. Two months post- surgery, hematologic and plasma biochemical parameters remained within normal limits. The animal did not show any clinical signs of disease or evidence of recurrence until five months follow-up post-surgery. To the author’s knowledge, this is the first report of successful surgical excision of a malignant dermal melanoma in a donkey.

A 2 years old intact male donkey (Equus asinus) was admitted to the Mansoura Veterinary Teaching Hospital, Faculty of Veterinary Medicine, Mansoura University, Mansoura, Egypt with two 5 × 10 and 5 × 8 cm diameters, round and firm subcutaneous masses under the tail (Figure 1A). 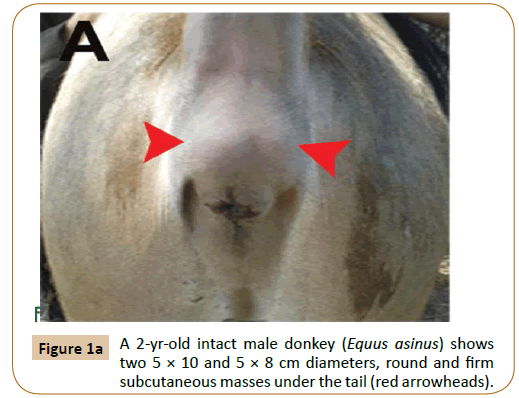 The masses were excised with a combination of sharp and blunt dissection while the donkey was under the effect of tranquilization and epidural anesthesia. The donkey was pre-medicated with intravenous injection of acetylpromazine [Vetranquil 1%, Libourne Cedex, France] at a dose of 0.05 mg/ kg BW. The surgical intervention was performed under epidural injection of a combination of 0.17 mg/kg xylazine HCl [Xylaject, ADWIA, Cairo, Egypt], and 0.22 mg/kg lidocaine HCl [Debocaine, Aldebiky, Egypt] [1].

After aseptic preparation of the area, a linear incision was performed. Both sharp and blunt dissection was performed to isolate the masses. The two primary masses were firm and pigmented. They were dissected from the surrounding subcutaneous and muscular tissues (Figure 1B). The masses were removed en bloc and submitted for histopathology. Bleeding was controlled and the wound was sutured by both simple continuous and simple interrupted sutures using chromic cat gut. The skin was closed by interrupted horizontal mattress suture using prolene. Prophylactic dose of antitetanic serum (3000 iu) was injected subcutaneously as well as 22000 iu/kg penicillin G procaine (Norocillin LA, Norbrook Lab. limited, Newry, Ireland) for 5 successive days post-operation. Following surgery, the animal was eating and acting normally and showed no signs of disease or postoperative complications.Tissue samples not thicker than 1 cm were fixed for 4-10 days in 10% buffered formalin. Tissue samples were reduced, placed in histology cassettes, and progressively dehydrated in alcohol (70–100%) and xylene. Five micron thick paraffin sections were prepared then stained with H&E. Histopathology of biopsy specimens of the masses showed that the deep dermal, subcutaneous, muscular, adipose tissue and lymph node architecture was variably disrupted by a highly pleomorphic population of heavily pigmented cells arranged in sheets, streams and islands.

These cells had marked anisocytosis and anisokaryosis with single to multiple nuclei (Figure 2A). Mitotic figures were rare. Neoplastic cells were also present within multiple blood vessels (Figure 2B). Moreover, multifocal areas of necrosis and dystrophic calcification were recognized (Figure 2C) associated with thrombosed blood vessels (Figure 2D). Two months after surgery, hematology and plasma biochemistry panels remained within normal limits as shown in Table 1. Healing was achieved without blemish and no recurrence until 5 months follow-up post-surgery as well as no masses appeared in other regions of the body.

Figure 2a:The masses consist of a highly pleomorphic population of heavily pigmented cells. These cells had marked anisocytosis and anisokaryosis with single to multiple nuclei (arrowheads). Melanocytic tumors develop as a consequence of disturbances in melanin metabolism, which lead to formation of new melanoblasts or increased activity of resident melanoblasts, resulting in overproduction of pigment at a focal area in the dermis [2].

A progression from accumulation of dermal melanocytes at the base of the hair follicles to development of multiple dermal melanocytic tumors was documented in tumor-prone locations. Equine melanoma is one of the most prevalent neoplasia seen, as it was described in 8 to 10 year old grey horses, whereas it was much less common in horses of other colors [3]. Older [4] grey horses have a high prevalence of cutaneous melanocytic tumors that were diagnosed solely according to the gross appearance of the mass [2,5,6].

The most common locations for equine melanoma are the groin, the perineal skin, the lips, and the eyelids [4]. Other common locations include the parotid lymph nodes and salivary glands. In Ref. [4], in one study, more than 79% of the horses had melanoma present in the perineal area, ventral tail, or both sites. In reference [7] another study estimates that up to 80% of grey horses over 15 years old develop melanoma. Melanomas in grey horses are most often non-invasive. In Ref. [4] unlike human malignant melanoma, grey horse melanomas are encapsulated and metastatic progression is prevented or slowed down by factors that are not yet known [8].

Clinical signs depend on the location and size of the tumor. Benign dermal melanomas and malignant dermal melanomatosis look very similar on histopathology and both occur in grey horses in the same predicted regions. In Ref. [8] therefore, neither the location of the tumor nor the histology can help to differentiate between them. One helpful factor that can help to determine the behavior of a tumor is its growth rate. A rapid change in growth rate has been linked to malignant transformation [7].

The etiology of melanomas in horses was not clearly determined.Disturbance of melanin metabolism leading to the development of new melanoblasts, or the increased melanoblasts activity resulting in a central area of too much pigment production in the dermis was suggested to be the most dominant theory in older grey horses. Ultraviolet radiation [sun exposure] may play a role in equine melanoma as in humans. However, the sun exposure doesn't seem to play a significant role in development of equine melanoma, because most melanomas occur in regions not exposed to the sun [9].

In domestic animals, malignancy is determined by tissue site, mitotic index, tumor size, lymphatic invasion, and breed. In Ref. [10] the treatment of choice for patients with melanoma is surgical excision of the mass with at least 2 cm margins. A diagnosis of a malignant dermal melanoma was made in our case based on the size, location of the masses, metastasis into the surrounding lymphoid, muscular, adipose tissues, in addition to, vascular invasion present on histopathology [11].

Metastasis occur secondary to hematogenous and lymphatic spread. Additionally, [2,6,12] in contrast to other species, metastases may arise because of multiple sites of melanocyte proliferation in horses. The [13] regional lymph nodes and lungs were the most common internal organ system affected. Other [12] sites of metastases are the spleen, liver, blood vessels and heart [6,12,14]. 64% of the horses had melanoma masses associated with blood vessels, regional lymph nodes, or both. This Ref. [7] is the first report of a successful surgical excision of a malignant dermal melanoma in an immature donkey. The excision of dermal melanoma was a reasonable treatment option in our case. No regrowth occurred at the surgery site for 5 months following surgery.