Intracranial subarachnoid hemorrhage (SAH) is a rare complication of myelography that can have serious consequences and presents a potentially life threatening complication in humans. In both humans and dogs [1-6], it may lead to raised intracranial pressure, the development of prolonged cerebral arterial spasm and cerebral ischemia [6-8]. The condition has been previously reported in two dogs in which it was found on post mortem examination [6]. The current case report describes the clinical presentation, diagnosis, and post mortem necropsy of SAH following an iohexol CT myelogram.

A 10 year old, 20 kg Chow Chow presented to the emergency unit with a 24 hour history of acute signs of back pain and spastic paraparesis following an 11 month history of progressive pelvic limb ataxia. There was neither a history of previous illness, nor a traumatic event been observed. The dog’s general physical examination was unremarkable.

The neurologic examination revealed non-ambulatory spastic paraparesis of the hind limbs. Proprioception was absent and spinal reflexes were exaggerated, bilaterally in both hind limbs. Nociception was present. Neuroanatomical localization indicated a lesion in the T3-L3 spinal cord segment. The degree of neurologic impairment was graded as 3/5 on the Sharp and Wheeler scale [9]. No abnormalities were detected on biochemistry analysis. 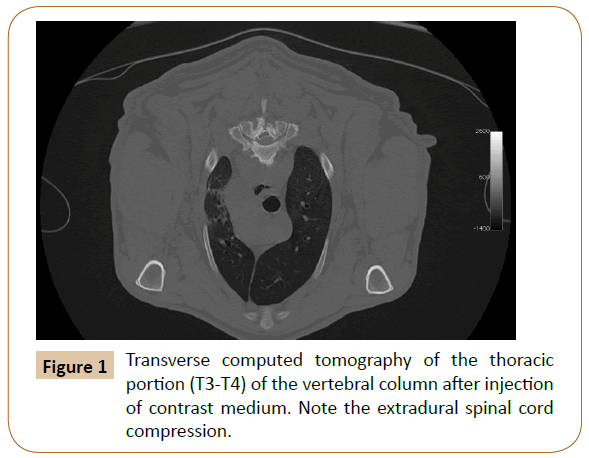 Twelve hours after lumbar iohexol injection, acute and rapidly progressive clinical signs of additional neurological dysfunction were observed. A neurological examination performed to determine the neuroanatomical localization and extent of the neurological lesions revealed multifocal involvement with the following signs: an alteration of consciousness and behaviour was observed; the patient was very anxious and disoriented with vocalisation and agitation.

Cranial nerve exam revealed miosis and acute blindness with bilaterally absent menace and direct and consensual pupillary light reflexes. Signs of central vestibular dysfunction manifesting were observed as vestibular ataxia, left sided head tilt, circling to the left and vertical nystagmus and non-tolerance of positioning in the right lateral recumbency. The dog was tetraplegic with proprioceptive defecits and increased spinal reflexes and showed some episodic spasticity in all four limbs associated with respiratory abnormalities characterised by hyperpnoea alternating with apnoea.

Results of complete blood count and C-reactive protein were unremarkable except for mild anaemia. Cerebrospinal fluid (CSF) collected from the cisternal tap was hemorrhagic and “spurted” (suggestive of elevated opening pressure). CSF analysis revealed xanthochromia after centrifugation, indicative of haemorrhage, and increased protein (2.77 g/L; reference range 0 - 0.3 g/L) and cellularity (26 cells/μL; reference range 0 - 5 cells/μL). Platelets were not seen in the CSF.

Bacteriology performed on the CSF sample to rule out bacterial meningoencephalitis was negative. Rotational thromboelastometry (ROTEM) testing performed 3 days after the lumbar puncture showed the presence of a hypocoagulable state (Figure 2). MRI (Magnetic resonance imaging) was carried out on a T system with mT/m gradients and revealed an inflammatory process within the brain parenchyma (Figure 3). 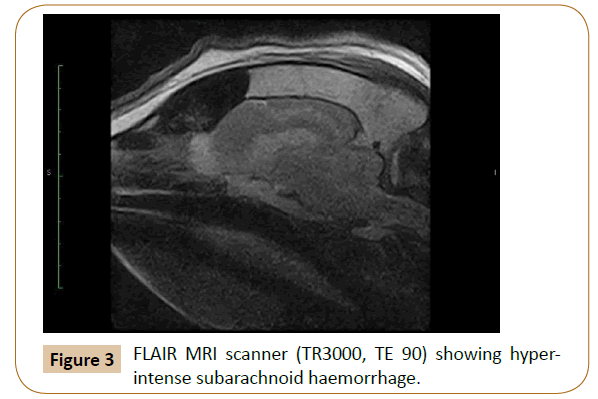 SAH is seen on the fluid attenuation inversion recovery (FLAIR) sequence as several non-delineated areas of high signal in the subarachnoid space in the interhemispheric fissure, intraparenchymal and frontal/parietal sulci.

The owner elected for euthanasia, due to the rapidly worsening neurological signs. A complete post mortem necropsy was performed 2 hours after the euthanasia. Diffuse SAH was observed throughout the spinal cord (Figure 4), brainstem, cerebellum and forebrain (Figure 5). 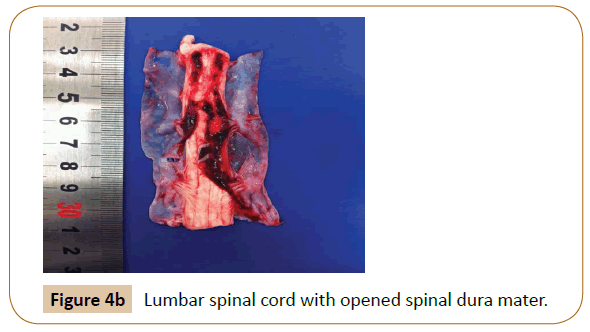 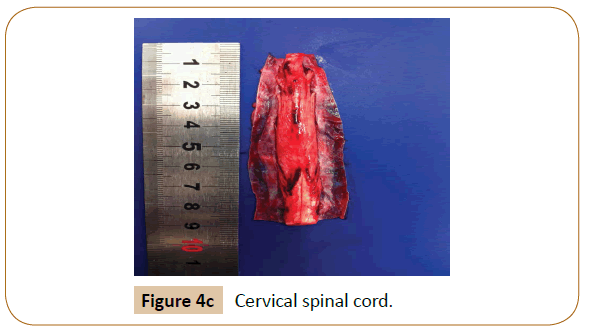 Figure 5a: Post Mortem Necrospy. Intracranial scattered hemorrhage. A: Base of the cranial cavity of the skull with calvaria and the brain removed. 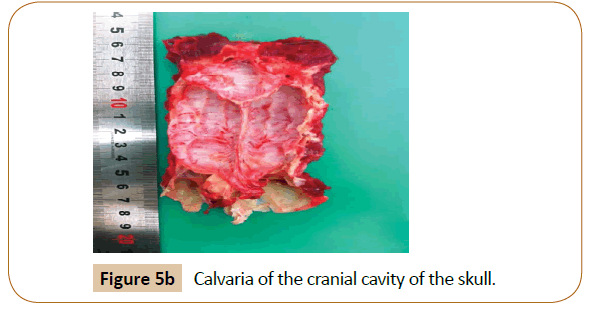 Figure 5b: Calvaria of the cranial cavity of the skull. 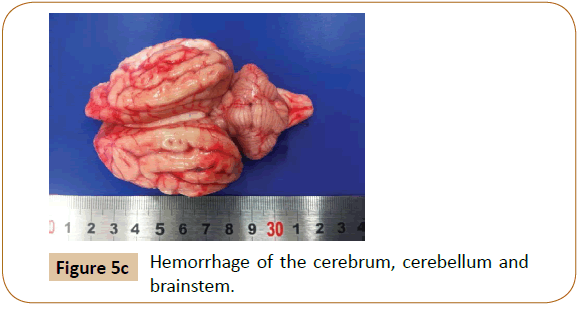 Figure 5c: Hemorrhage of the cerebrum, cerebellum and brainstem.

The source of bleeding could not be clearly identified. Neither other abnormality nor evidence of other hemorrhage elsewhere was observed at the necropsy. Histopathological examination of the spinal cord and the brain was performed and confirmed the subarachnoid location. Severe multifocal SAH were observed in the ventral aspect of the spinal cord (Figure 6). Moderate multifocal hemorrhage localised into the leptomeninges of the cerebellum, the brainstem and the sulci of the cerebrum were observed. There was no inflammation nor infection associated with the hemorrhage. The dog described in the present report had an unusual complication of lumbar puncture. In humans, intracranial subarachnoid and subdural hemorrhages/hematomas have been described in several case reports following lumbar myelography [1-5]. Only 2 cases have been previously reported in dogs [6]. In comparison to the present case report, the animals underwent ventral decompressive surgery but did not recover from anaesthesia with complete loss of consciousness and spontaneous respiration. The diagnosis was made post-mortem to the author’s knowledge, this case report of SAH following lumbar puncture is the first in veterinary medicine in which the clinical signs and diagnostic workup are described.

In 7 years (2007-2014), over 2500 CT myelograms have been performed in XXX. The current case is the only complication of lumbar puncture during this time (0.04%). This rare complication should be suspected in patients with a prolonged headache and neurological deficits such as decreased vision, convulsions, and loss of consciousness, after lumbar puncture [3,10]. The clinical signs of SAH following lumbar puncture have not been previously described in veterinary medicine. In humans, the clinical signs generally occur within 12 hours following myelography as described in this clinical case [1,2,6]. Myelography has been a routinely used imaging technique however adverse effects associated with the procedure, including seizures, worsening of neurologic clinical signs, cardiac arrhythmia, SAH, and death, have been reported in canine patients [6-11].

To decrease the risk of complications as encountered in the present study, non-contrast-enhanced CT alone is a diagnostic alternative for locating the site of disc herniation in dogs for surgical planning particularly in chondrodysplastic dog [12,13]. CT and MRI have supplanted CSF sampling as the primary diagnostic techniques with suspected SAH, because puncture does not provide information about the degree and location of SAH. CSF sampling is frequently used in association with CT or MRI to diagnose intracranial pathology, especially SAH. A traumatic tap may result in iatrogenic introduction of red blood cells (RBCs) into the CSF sample and may lead to false positive diagnoses of SAH [14,15].

Methods to distinguish traumatic puncture from true SAH include an identification of decreasing numbers of RBC in three samples collected sequentially and an elevated opening pressure with bloody CSF [15,16]. Indeed, this finding is strongly suggestive of a true SAH [15]. In the case described here the pressure was not measured but subjectively, high pressure was observed. Visualisation of xanthochromia, the result of the hemoglobin breakdown products from the erythrocyts is indicative of recent hemorrhage as part of the disease process [14,15].

It takes about 12 hours from the onset of SAH for xanthochromia to approach 100% sensitivity [17] and the examination should take place as soon as possible after the sampling is completed. The utilisation of fluoroscopy-guided puncture has the potential to decrease the frequency of traumatic taps. In the study of reference [14], the use of fluoroscopic guidance resulted in a 65% decrease in the frequency of a traumatic tap. In humans, CT has been the imaging modality of choice in cases of suspected SAH because of its high sensitivity for identification of acute SAH, the short scan times and its widespread availability.

The sensitivity of CT for identification of SAH is more than 90% within 1 day of hemorrhage [18], but falls rapidly with time and approaches 0% at 3 weeks [17]. Today MRI is accurate in detecting SAH. Perl et al. presented an in vivo model for assessing the accuracy of MRI in acute hemorrhagic forms of stroke, and found an accuracy of 86% for identification of SAH [19]. In Ref. [20] reported 89% sensitivity of fluid attenuated inversion-recovery (Flair) images in contrast to 39% with CT in a rabbit model 2-5 h after subarachnoid injection of blood. The sensitivity of MRI with conventional sequences to SAH increases over time.

In all reported cases, a definitive cause of hemorrhage after lumbar puncture has not been identified. Different pathophysiologic mechanisms for SAH have been suggested based on postpuncture CSF leakage, on neurotoxicity of the contrast media or on traumatic lumbar puncture [2,5,6,15]. During puncture, no bleeding was observed in the dog described in this report, and the volume of iohexol (Omnipaque® 300 mg/ml GE Healthcare Inc., Princeton, NJ) (0.33 ml/kg) used in this case was not unusually high and was smaller than the volume used in the study of reference [6].

Therefore, the spinal CSF leakage was probably the main pathogenic factor responsible for the development of SAH in this dog. This pathogenesis involves leakage of CSF through the dural defect produced by dural puncture, causing a decrease in CSF volume. Decreased cerebral volume or caudal displacement of cerebral structures within the skull secondary to leakage of CSF may increase the distance between brain surface and dura mater. This leads to stretching of bridging veins, increasing the risk of rupture, and causing subdural or subarachnoid hemorrhages [2,5]. However, in the current report, there was no sign of rupture or of a downward shift of the cerebral structure.

SAH may also cause a systemic inflammatory response syndrome (SIRS) [21]. Therefore, the hypocoagulable state seen on rotational thromboelastometry performed 3 days after the lumbar puncture is likely due to an hemostatic dysfunction as a disseminated intravascular coagulopathy (DIC) secondary to the SAH because of consumption of coagulation factors and increased fibrinolytic activity. A hypocoagulable state seems unlikely to be the cause of the hemorrhage because firstly, the hematology performed on the first day was without abnormalities and secondly, because there was no evidence of bleeding elsewhere at the post-mortem necropsy.

Assessment of hemostatic capabilities including tests of primary hemostasis (platelet count and platelet function tests), secondary hemostasis through plasma-based assays designed to further localize defects (aPTT and PT) and the fibrinolytic system (FDP and D-dimer) were not performed to further explain this hypocoagulable state. SAH may lead to increased intracranial pressure; the development of cerebral vasospasm; a reduction of cerebrospinal fluid and cerebral ischemia [6-8]. In human being, cerebral vasospasm is considered the most acute complication after SAH with an incidence as high as 70% and is responsible for severe ischemic complications [7,8,22]. The multifocal nature of the present case may have been due to cerebral vasospasm secondary to SAH.