Criteria for considering studies for this review

Only randomized controlled trials (RCT) were included in this review. Cohort studies, case series and case reports were excluded. All participants were:

b) Diagnosed with active CD (CDAI >150) as defined by conventional clinical, radiographic and endoscopic criteria for induction of remission. For maintenance of remission, participants needed to be in remission at recruitment as defined by any activity index and conventional clinical, radiographic and endoscopic criteria.

Studies were included if participants in the treatment group received BCG vaccine through any route and at any dose and the comparison group received a placebo or any other active comparator. Any durations of follow-up and any cointerventions (provided they were given to both groups) were allowed.

1) Frequency and nature of adverse events;

2) Withdrawals due to adverse events;

3) Mean change in CDAI; and

4) Clinical, histologic, or endoscopic changes as defined by the authors.

Search methods for identification of studies

A search strategy using both medical subject headings and text words was developed in conjunction with a health sciences librarian. No language restrictions were used for the search. The only filter that was used in searches was limiting queries to human studies as opposed to animal studies. The following general search terms were used:

"BCG" or "Bacillus Calmette-Guerin" or “TheraCys®, and TICE® BCG” or “Mycobacterium bovis”

Additional efforts to identify relevant trials were made through browsing the reference lists of included articles to identify any potentially relevant citations. An additional hand search of abstracts presented at Digestive Disease Week (DDW) from 1980 to 2016 was conducted.

Two authors screened (WEM & JY) all of the articles retrieved through the search of databases, and clinical trials described above. All studies were first screened on the basis of title, and then on the basis of abstract. During this screening process, studies were classified into three categories: “exclude” for studies in which it was clear from either the title or abstract that the study did not address the research question or was not an RCT study design, “include” for RCT studies that addressed the research question, and “unsure” for studies for which there was uncertainty. Studies which were denoted “include” or “unsure” were considered potentially relevant, and were further examined in the second phase of the selection process.

In the second phase of study selection, two authors (WEM and JY) independently assessed potentially relevant studies based on the inclusion criteria described above. The full texts of the articles were retrieved in order to decide whether these criteria were met or not. Disagreements were resolved by mutual discussions. The authors were not be blinded to the name of authors, institutions, journal of publication, or study results during study selection or at any other stage of the review.

Assessment of risk of bias in included studies

Authors of the primary studies were to be contacted (if possible) for completion of any missing data.

Expected sources of heterogeneity included: age of participants, route and dose of BCG, duration of treatment, and variation in outcome measures used. If needed, the I2 statistic was to be calculated to assess heterogeneity [14].

Graphical and statistical methods were to be used, if needed, to evaluate publication bias. As only one study was included, a funnel plot was not constructed to assess the possibility of publication bias.

Data were analyzed using Review Manager (RevMan 5.0.20). No meta-analysis was performed as only one study fulfilled the inclusion criteria for induction of remission and one for maintenance of remission. In addition, a sensitivity analysis was not required.

Results of the search 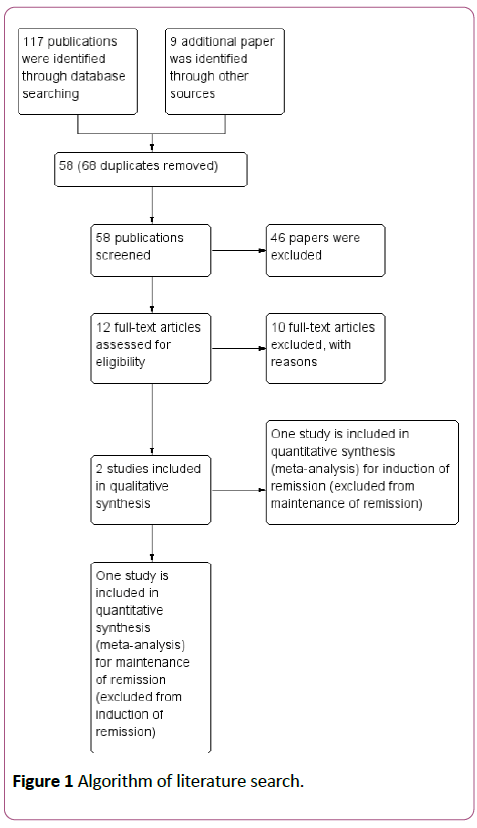 Included studies: For induction of remission of active CD, Rahban et al. randomized a total of 9 patients (5 patients on BCG vs. 4 patients on placebo) with active Crohn's disease (CDAI > 150) to either oral BCG (Chicago Research Foundation) vaccine mixed with grape juice or placebo (grape juice alone) for 6-12 months. The treatment regimen was two vials weekly for 12 weeks then every other week for another 12 weeks and finally every month for 6 months. Three patients in the BCG group and 2 in the placebo group were taking sulfasalazine at the time of randomization and continued on the same medication during the trial [15].

For maintaining remission of inactive CD, one study was included. Burnham et al. examined the role of BCG in maintaining remission for CD [16]. They recruited 50 patients with established inactive or mildly active CD. Twenty-nine patients were diagnosed on clinical, radiological and, where possible, biopsy evidence of CD. The remaining 21 patients had surgical resection of parts of their bowel and had pathological evidence of CD on the resected specimens. Specific treatment for CD was not permitted. Twenty four patients were allocated to receive oral Pasteur BCG (immuno BCG-F), 75 mg/ampoule, and 26 to placebo (3% methyl cellulose, 5 ml/ampoule). The regimen for taking this treatment was one ampoule in the first week, two ampoules in the second week, four ampoules weekly for the next 24 weeks, and four ampoules monthly for the next 6 months. Relapse of the disease was defined as a clinical deterioration of such a severity that the clinician considered it necessary to stop the trial and give other medications [16]. Nineteen patients in each arm completed the study to the end of 12 months. Three patients in the BCG group versus seven patients in the placebo group had a relapse at different time intervals within the year of follow-up. Two patients in the BCG group were withdrawn because of gastrointestinal symptoms. One developed diarrhoea and stopped BCG for an unknown duration of time, then resumed taking BCG openly. The other patient had nausea, vomiting and diarrhoea and stopped taking BCG. The same symptoms happened on reintroduction of BCG. One patient in the placebo group had diarrhoea. Overall, there was no significant difference in adverse effects between the two groups [16].

Excluded studies: One study [17] was excluded as the patients of that study were used by the study of Burnham et al. [16]. Individual case reports and case series were also excluded [18-21].

Risk of bias in included studies: Using the Cochrane Risk of Bias Tool [13] it was determined that the overall risk of bias in the studies by Rahban et al. [14] and in Burnham et al. [16] was either high or unclear. Neither the method of randomization nor allocation concealment was described in both studies. Allocation concealment was also not used in the included studies. Although blinding was mentioned, methods of blinding were unclear. The published reports did not include all the details of expected outcomes. Other potential sources of bias included the fact that both studies were conducted over 30 years ago.

Effects of interventions: Rahban et al. did not show a statistically significant effect of BCG versus placebo in inducing remission in active CD. Four patients were followed for 12 months, two for 9 months and two for 6 months. One patient withdrew after 3 months as he was started on prednisone because of arthritis. Only 4 out of patients (44%) completed 12 months follow up. CDAI varied in both groups and demonstrated no BCG or placebo group trends. One patient in the BCG group and two in the placebo group established remission (CDAI < 150) at least at one point during follow-up. No major adverse events were reported [15]. Compared to placebo, oral BCG vaccine was not effective in inducing remission of active CD (RR 0.40, 95% CI 0.05-2.98) (Figure 2).

For maintaining remission of inactive CD, Burnham et al. did not find any significant difference between oral BCG vaccines versus placebo during a follow-up period of 12 months. Risk ratio for relapse was 0.46 (95% CI 0.14-1.59) (Figure 3). Two patients in the BCG group and one patient in the placebo group developed diarrhoea that was severe enough to stop treatment [16].

Two randomized controlled studies were included in this review; one examined the role of BCG vaccine in induction of remission in active CD and the other investigated the role of BCG vaccine in maintaining remission for inactive CD [15,16]. Both studies failed to demonstrate a therapeutic effect of BCG over placebo in either induction or maintaining remission for CD. Both studies had high or unclear risk of bias.

BCG vaccine is a live attenuated vaccine against tuberculosis (TB). It is prepared from attenuated live bovine TB bacillus Mycobatrium bovis. BCG vaccine was used to enhance cellular immunity in some patients with leukemia and solid tumours with some success [10]. The rationale of using BCG in patients with CD is not related to the possibility of involvement of Mycobacterium in the pathogenesis of Crohn's disease. Instead, it was suggested that BCG vaccine may act as an immune-stimulant which may help in controlling symptoms of active CD [15,18]. Cancer immunotherapy using locally applied BCG vaccine was also employed to prevent recurrence of superficial forms of bladder cancer [22]. Earlier studies have shown reduced lymphoblastic transformation and other test of cellular immune function in CD but results have been conflicting. Several case reports and case series [17-19,22] reported some improvement in patients with CD using BCG vaccine. Geffroy et al. reported successful treatment of CD using BCG vaccine as immunotherapy [18]. However, the majority of these reports did not have an accurate assessment of CD nor had any controls. Some of these reports suggested the use of BCG vaccine by scarification and not orally but this route was not successful in other reports [21].

The concept whether early BCG vaccination plays a preventive role in CD or not was examined by Rua et al. who reviewed the hospital records of their Gastroenterology (280 endoscopies/year) and Pathology (1500 studies/year) Departments from 1970 to 2000 for proven cases of CD. Only one patient was found with CD; a 13-year-old girl who notably had received BCG vaccination three times in her life because of negative tuberculin skin tests, then developed CD [23].

Our review is limited by the number of the studies included. Only one study fulfilled our inclusion criteria [15] for induction of remission of active CD and another study fulfilled our inclusion criteria for maintenance of remission of inactive CD [16]. The sample size of both studies was small with a poor or unclear methodological quality. Both studies failed to show any significant effect of oral BCG vaccine over placebo in inducing or maintaining remission for CD.

The current evidence does not support the use of oral BCG vaccine in induction or maintenance of remission for Crohn's disease. However, this evidence seems to have high or unclear risk of bias. Considering the major advances achieved in understanding the pathogenesis of Crohn's disease, the biology of using BCG vaccine in the management of Crohn's disease needs to be reconsidered before large randomized controlled trials be conducted.

Dr. El-Matary is supported with a grant from the University of Manitoba and the Children’s Hospital Research Institute of Manitoba 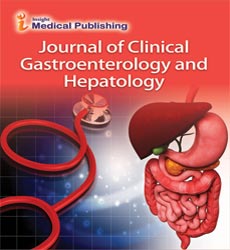