Dietary therapy is a major component in the management of most gastrointestinal disorders. The objective of this study was to evaluate the efficacy of a new dry high protein – low carbohydrate – high fat diet intended for the management of chronic maldigestion-malabsorption in cats. Forty-seven client-owned cats with chronic gastrointestinal diseases were recruited. During the first month (M1) of follow-up, they were fed exclusively the test diet (Virbac VETERINARY® HPM Digestive Support Cat). During the second month (M2), they were fed again their usual dry diet. If medical treatment became necessary during the study, the cat was excluded. To describe the clinical status, the 5 following digestive parameters were assessed 6 times, at inclusion, then each week of M1, and finally at the end of M2: frequency of defecation, faeces quantity, faecal score, faeces odour, and frequency of flatulence. Forty-four cats completed the study. The test diet resulted in significant improvement in all parameters. After 1 month fed the test diet, 72% of cats were completely cured (all parameters normal), 26% were partially improved, and only 2% were unchanged. At the end of M2, 61% of cats had minimum 1 parameter degraded again. These results confirm the clinical efficacy of the new highly digestible high protein – low carbohydrate – high fat diet for chronic gastrointestinal disease management and recurrence prevention in cats.

Dietary therapy is a major component in the management of most gastrointestinal (GI) diseases with compromised digestion and/or absorption. Dietary intervention should be aimed at reducing intestinal inflammation and controlling clinical signs (e.g., vomiting, diarrhea) while providing adequate nutrients to meet requirements, compensate for losses through the GI tract, and promote healing and recovery [1]. Because of the diverse causes resulting in maldigestion-malabsorption, a number of food types may be appropriate [2]. The most commonly used strategy is to feed a highly digestible, low-residue food. Indeed, highly digestible foods favor a more complete nutrient absorption in the proximal gut, thus reducing osmotic diarrhea and uncontrolled fermentation in the distal gut [3,4].

As strict carnivores, cats have naturally limited capacity to digest carbohydrates, and carbohydrate digestion may be more impacted in case of intestinal and/or pancreatic failure. On the contrary, protein and fat digestion is efficient in this species. Studies have demonstrated that high-fat diets are well tolerated in cats with inflammatory bowel disease [5]. Moreover, as fat is high in energy, higher fat foods allow smaller amounts of food intake to maintain energy provision, which minimizes GI work and helps control clinical signs such as restoration of body condition [6].

Fat and protein, especially of animal origin, also improve food palatability which is important in patients with digestive disorders: the unpalatability of low fat – low protein diet could be counterproductive if sick animals refuse to eat it. That is why a highly digestible high protein - low carbohydrate – high fat diet should ideally be proposed to help manage GI diseases in cats. In some cases, increasing dietary fibers may be beneficial for GI tract recovery [5]. Fermentable soluble fibers, including fructooligosaccharides, act as prebiotics and influence positively the composition of the intestinal microbiota. In addition, bacterial fermentation of such fibers increases the concentration of short chain fatty acids (SCFA), mainly butyrate, which have a trophic role and will increase colonocyte growth and proliferation [7,8]. Mucilaginous fibres, with their water-holding capacity, form gels in water and help improve the consistency of the faeces [9-11]. Insoluble fibers can help normalize motility [12].

Supplementation in some specific functional ingredients has also shown various benefits on GI health: exogenous source of free nucleotides, precursor units of DNA and RNA, may optimize the GI function by promoting mucosa renewal and by stimulating local immunity. Clays may also be used: they form a protective film on the digestive mucosa and separate it from the potential irritating or toxic elements in the lumen [13-16].

A new dry diet was developed, combining a specific nutrient profile (high protein – low carbohydrate – high fat) and the supplementation in various functional ingredients with targeted action on the intestinal tract. The objective of this study was to evaluate the clinical efficacy of this diet for the management of chronic maldigestion-malabsorption in cats.

Forty-seven adult client-owned cats were recruited in a database prepared by an independent company specialized in customer surveys. They have experienced chronic continuous or intermittent gastrointestinal disorders of nonspecific causes for minimum 3 months, without deterioration of their general health status. For inclusion, minimum 2 of the 5 following digestive parameters had to be considered as abnormal: frequency of defecation (≥ 3 stools/day), faecal score (≥ 3 using a five-point scoring system where 1=hard dry and crumbly and 5=watery) shown in Figure 1, faeces odour (≥ odorous=slightly bearable) (Table 1), faeces quantity (≥ large) (Table 2), presence of flatulence (Table 3). Cats were usually fed dry pet food, but not dietetic digestive food in the last month.

The test diet was a new dry diet intended for the management of chronic maldigestion-malabsorption in cats (Table 4). It was formulated to provide complete nutrition and to be highly digestible. Regarding the macronutrient profile, the diet was a high protein – low carbohydrate – high fat diet. By addition of fish oil, the diet had an increased level of omega-3 fatty acids, in order to help reduce excessive inflammation as described in literature. According to ref. [17,18] the diet was also supplemented in various functional ingredients known for their complementary beneficial actions on GI health: fructo-oligosaccharides, psyllium fibre, nucleotides, beta-glucan, pasteurised Lactobacillus acidophilus, and butyrate. Added butyrate was protected by coating to allow gradual release over the intestinal tract. Coating was also aimed to reduce the typical unpleasant smell of butyrate.

The test diet was provided in neutral bags, pet owners had no information about the brand, the composition and the nutrient profile. The only information given to pet owners was the feeding table which precised the daily quantity of kibbles to maintain their cats at optimal body weight.

Cats were followed up for two months. During the first month (M1), after a 4-day diet transition, they were fed exclusively the test diet. During the second month (M2), they were fed again their usual dry diet. No medical management was allowed during the study; if medical treatment became necessary, the cat was excluded.

For assessment, pet owners had to fill in online multiple-choice questionnaires. By individual phone meetings at the beginning of the study, pet owners confirmed their commitment and their understanding of all the items included in the questionnaires. Assessments were performed 6 times: at inclusion (=basal assessment with usual diet), then each week of M1, and finally at the end of M2. The 5 digestive parameters previously defined were assessed to describe the cat’s clinical status. Owners had then to compare parameters with previous assessment and basal assessment in order to describe their cat’s status improvement or degradation. Owners answered also questions about kibbles characteristics, palatability, and general satisfaction. They were asked to give a satisfaction score from 0 (not satisfied at all) to 10 (totally satisfied) and precise strengths and weaknesses of the tested product.

At each time, mean frequency of defecation and mean faecal score were calculated by averaging all the corresponding individual figures. Wilcoxon signed rank and Mc Nemar’s tests were performed to compare each parameter at different times, with a significant threshold of 5%.

Three cats did not complete the study. One cat was removed because of poor palatability and consumption of the test diet. Two cats were lost during the second month of the study. So, 44 cats were analyzed. Cats were aged from 0.7 to 8 years (mean age: 3.5 ± 2.6). None of the cats required medical treatment during the study. Therefore it is assumed that results reflected the only effect of the dietary management. Initial mean body weight and body condition score (nine-point system) averaged 4.2 ± 1.6 kg and 5.3 ± 0.6, respectively, with no significant change throughout the study.

Regarding the design of the study and the analysis of the following results, a potential limit was the absence of randomization and control group, comparing the results of one group fed the test diet and one group fed a reference diet (commercially available therapeutic pet food intended for the management of gastrointestinal disease in cats). In this study, the design supposed that the usual diet could be the control diet, and that each cat could be its own control since fed successively with the two diets. 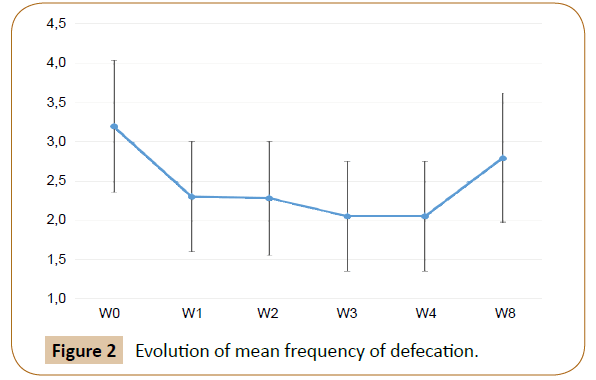 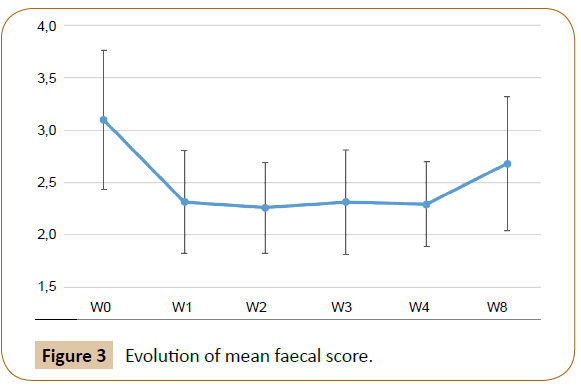 At inclusion, all owners considered that their cats had « abnormal » stool odor (Table 5). Forty-two cats improved when fed the test diet, and 32 of them degraded again when switched to their usual diet. At the end of M1, 85% of cats were considered as « normal » for this parameter. At the end of M2, the rate decreased to 50%.

Regarding flatulence parameter, 41% of cats were considered as « normal » at inclusion because they never presented flatulence (Table 5). When feeding cats with the test diet, a significant improvement was observed since 98% of cats had no flatulence during M1. This parameter did not significantly changed during M2.

During M1, none of the 5 parameters were degraded in cats, parameters were unchanged, improved, or cured (i.e., improved and become normal). Improvement was very quick in almost all cats: depending on the parameter, 81 to 96% of responder cats did improve as soon as the first week fed the test diet (82% for frequency of defecation, 96% for faecal score, 95% for faeces odor, and 81% for faeces quantity). Finally, 72% of cats were completely “cured” (all parameters normal) after 1 month fed the test diet, 26% were partially “improved” (some parameters unchanged, some improved but still abnormal, and some become normal), and only 2% (one cat) were “unchanged” (Figure 4). 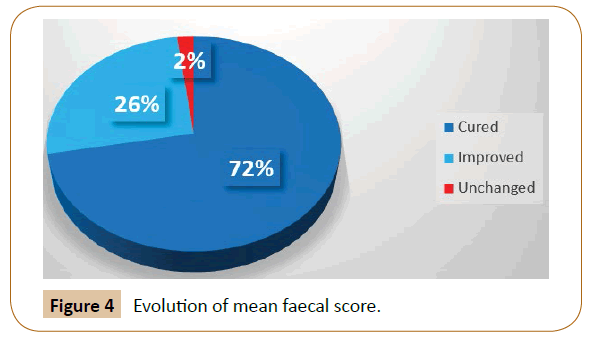 On the contrary, the switch to usual diets during M2 resulted in degradation of the digestive status for most cats: at the end of M2, 61% of cats had minimum 1 parameter degraded again.

At the end of M1, 89% of owners considered that their cats appreciated the test diet, and 55% précised that their cats preferred the test diet compared to their usual diet. The high level of palatability may be explained by the high part of ingredients from animal origin, in respect of carnivore’s preference: poultry fat and fish oil as the only sources of fat, pork and poultry protein as the main source of protein (94% of total protein).

Combining all the assessed parameters, 85% of owners declared to be satisfied by the test diet. The mean satisfaction score was 8.0 ± 1.8. The most commonly cited strengths were the high palatability, the improvement in the digestive status, and the adapted size and shape of the kibbles. Forty-three per cent of pet owners said that they did not notice any weakness. The most common cited weakness was the strong odor of the kibbles when opening the bag. This odor could be partly explained by the supplementation in butyrate. Despite a specific coating, the smell of butyrate was not completely masked. It is interesting to notice that the strong smell for pet owners did not impact the palatability in cats.

Although this study did not contain a control group, the results confirmed that the new highly digestible diet with high protein - low carbohydrate - high fat levels and specific supplementation in digestive functional ingredients was beneficial in the management of feline chronic gastrointestinal disease. Clinical improvement was quick and significant. The switch to usual diets resulted in the degradation again of the digestive status of the cats, suggesting that the new diet may also be proposed in a longer term for the prevention of recurrences in cats subject to digestive disorders.