Deshina I* and Yusuf OY

Department of Aquaculture and Fisheries, University of Ilorin, Nigeria

Copyright: © 2017 Deshina I, et al. This is an open-access article distributed under the terms of the Creative Commons Attribution License, which permits unrestricted use, distribution, and reproduction in any medium, provided the original author and source are credited.

This study examined the use of O. gratissimum oil as anesthetic in O. niloticus juveniles. Ten fish with average weight (36.0 ± 1.6 g) were allocated to five rectangular tanks (50 × 34 × 27 cm) containing 35 litres using completely randomized design in triplicates and a control. The experimental treatment (dose) were prepared using 1:20 of extract oil and ethanol in five concentrations (0, 20, 40, 60, 80 and 100 mg/l) and exposed for twenty minutes before transferred in to recovery tanks. The data obtained were analyzed using descriptive statistics, ANOVA, Duncan multiple range test to separate the means and regression analysis. The results show that concentration of 100 mg/l anesthetized highest number of fish (10.00 ± 0.00) while the least was observed in 20 mg/l (1.67 ± 1.53) within three minutes. Fastest recovery was observed in fish anesthetized with the 20 mg/l of oil while 100mg/l had the least mean recovered fish (1.00 ± 1.00) within three minutes. There are relationships among induction time (R2=0.892), concentration of oil and recovery time (R2=0.905). However, 60 mg/l is considered adequate for the anesthetic of O. niloticus.

The Oreochromis niloticus is an important fish culture by many fish farmers in Nigeria. It is also attracts high market value because of its widely acceptability in the country and therefore it has occupy a priority position in a delicacy list. However, today aquaculture practices require handling during measuring, weighing and some biological examinations, thereby subjecting the fish to unavoidable stress. To minimized the stress, chemicals such as tricaine methanesulphonate is been used but the uses of chemicals are been discourage because of its residual effects in the tissues of the fish, expensive nature of the drugs and increasing advocate for organic aquaculture. However, previous studies have reported the used of clove oil as anaesthetic material in fish [1-3]. Fish handlers usually sustain injuries during handling of O. niloticus because it has several fins making it difficult to handle. Activities such as blood taking and transportation are common practices in today aquaculture research therefore, expose fish to trauma, pester and anxiety leading to loss of mobility and loss of balancing among others [4].

O. gratissimum (Lamiaceae), commonly known as “alfavaca” also known as “Efinrin” in Yoruba language is a native to Africa [5]. In Nigeria, the plant grows virtually in all regions. It could be found in many farms, residential and industrial areas. It grows and survives well in south-west of Nigeria and could be found at backyard where it is not intentionally planted.

The plant has been use for many purposes ranging from human consumption to its application in traditional medicine in Nigeria. It has good aroma and it leaves has become delicacy and serves as spicy for fish and meat products such as Kilishi, Dembu, Yaji etc. Many authors reported that the plant has some chemical compounds with antimicrobial properties such as eugenol, linaol, methyl cinnamate, camphor and thymol [6,7]. It has been demonstrated in the previous studies that eugenol (75-98%) isolated from O. gratissimum is the major antimicrobial component which inhibit and kill gram-positive bacteria and fungi [8,9].

In spite the enormous activities on O. niloticus, there is paucity of information on the use of naturally derived anesthetics to manage both intentional and unintentional stress hence the need for this study. In adequate application of anesthetics may cause adverse side effects, therefore, the effects of O. gratissimum oil as anesthetics deserve investigation and cannot be overemphasized.

This study will shed more light and act a guide on stress management in fish farming and serves as an eye-opener in the uses of plant extract as anesthetics in Nigeria. The objectives of this study are to determine the use and dosage of O. gratissimum oil as anesthetic in O. niloticus juveniles.

This study was conducted in the Department of Aquaculture and Fisheries Management, University of Ibadan, Nigeria. Ibadan is located on Latitude 10°23'0"N and Longitude 12°5'0"E (OYSG, 2015). Ibadan two major seasons which comprises of dry and rainy seasons. The dry season runs through November to March while rainy season starts around March to October with annual rainfall ranges 1500 to 1600 mm in 2015 [10].

Fresh leaves of O. gratissiumum were obtained from a backyard in Agbowo, Ibadan and identified at the herbarium of the Forestry Research Institute of Nigeria (FRIN), Ibadan.

Five (5) grams of O. gratissiumum was extracted in a Soxhlet apparatus using 170 ml of di-ethyl ether [11,12]. The filtrate was concentrated on a rotary evaporator at 40°C for chemicals elimination, stripped into sterile bottles. The experimental treatment (dose) were prepared using 1:20 of extract and ethanol to have six concentrations (0, 20, 40, 60, 80, and 100 mg/l) [13]. Stages and effective concentrations for anaesthesia as described by Iwama et al., and Ross and Ross [14,15] were adopted in this study. The fish were placed in an induction tanks containing different dosages, observed for twenty minutes, transferred in to recovery tanks and observations were recorded.

Fish (O. niloticus) with body weight ranges from 18.45 to 21.7 ± 3.2 gm were purchased from Masopha Farm, Ibadan. The fish were transported to the Departmental Research Laboratory immediately in plastic container half-filled with water from the rearing tanks and conditioned for five (5) days in rectangular plastic tanks (50 × 34 × 27 cm) and fed twice a day (5% of body weight) with 40% crude protein commercial floating pelleted (Durantee) feed at 08:00 AM and 06:00 PM.

One hundred and eighty (180) O. niloticus juveniles were allocated into 18 transparent rectangular plastics (50 x 34 x 27 cm) containing 35 litres of water in a completely randomized designed. The experiment has six treatments in triplicates. Each tanks were allotted ten fish thus 180 fish [Total number of fish=(Number of treatment × number of replicates × number of fish per tank)=6 × 3 × 10=180] fish. Water in each tank was replaced every three (3) day sourced from an industrial borehole.

The data obtained from the experiment were subjected to one-way analysis of variance (ANOVA). Means were separated using Duncan’s multiple range test (DMRT) at p=0.05 and regression was used to determine the relationship between induction/recovery time and extract concentration with means of SPSS statistical package version 20. 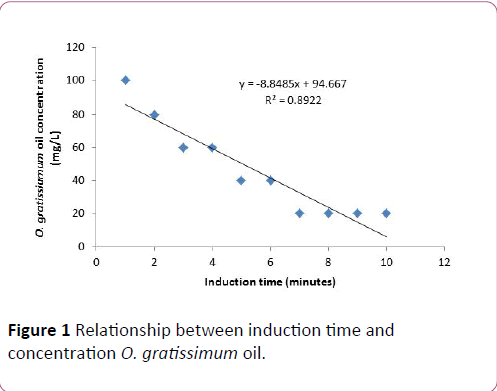 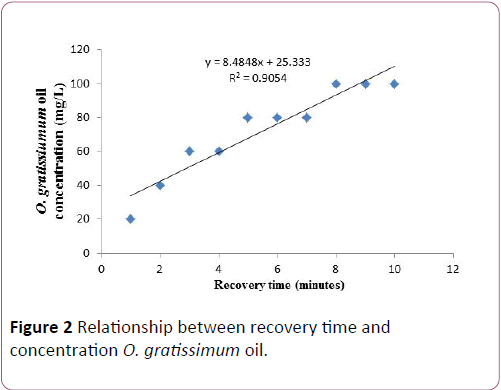 The result of this study shows that lower dosages did not achieve stage 3 inductions (i.e. cessation of operculum) although there was some sign of loss of mobility in few fish. The O. gratissimum oil concentration of 60 mg/l and above anesthetized most of the fish and up to 100% in 100 mg/l. the 60 mg/l was considered adequate for anesthetic activities on O.niloticus. The result further shows that there is statistical significant difference in the effect of oil concentration in induction performance of O. gratissimum on O. niloticus but separating the means using Duncan Multiple Range Test shows that is no statistical significant difference among the 60, 80 and 100 mg/l concentration of the oil. F-calculated is greater than Ftabulated hence the null hypothesis is rejected. The result observed in this study agreed with the work of Ribeiro et al. who reported that concentration of O. gratissiumum oil above 40 mg/l is adequate for anesthetized O. niloticus. Recovery time shows that the decrease in concentration of the oil the faster the fish recovered from the induction. Majority of the fish anesthetized with concentrations between 40 and 60 mg/l recovered within three minutes and therefore considered adequate. The result further revealed that concentration of the oil is statistically significant different on the recovery of the fish showing F-calculated greater than F-tabulated hence the null hypothesis is rejected. The result is in agreement with the work of Roubach et al., Barbosa et al., Maraka et al., Ribeiro et al. [16-19].

However, the O. gratissimum oil can be used as anesthetic material in O. niloticus at 60 mg/l concentration. Therefore, uses of naturally produce anesthetics will reduce residual effect of continuous use of chemicals in aquaculture [20]. In today fish farming and research, handling fish, from measuring for production purposes to sales, injuries of the fish, stress and that of handlers cannot be completely removed hence it could be reduced if the fish is anesthetized using O. gratissimum oil without any significant negative effect.